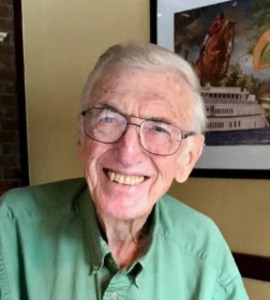 Paul was born on June 28, 1932, in Powell Station, Tenn., to Rev. Virgil and Velma Lou (Huskey) Wallace. He received a degree in Business Administration from the University of Tennessee in Knoxville, and worked for the railroad for 30 years, eventually becoming the Terminal Trainmaster in Richmond, Va., before retiring. On July 1, 1955, while still in college, he married Diane Fisher after meeting her on a blind date. They raised two daughters, Donna and Joanne and a son, Mike.

Paul and his cousin, Gene Huskey left high school early so they could enlist in the Air Force and serve their country during the Korean War. Paul served from 1949 to 1952, spending most of his time stationed in Germany as a radio operator. After rising to the rank of Staff Sergeant and completing his time in the military, Paul returned to Knoxville to finish high school before attending college.

Paul was an avid golfer, collecting three holes-in-one over the years, eventually getting a mention in the local newspaper. He also enjoyed fishing, watching Tennessee Volunteers football games, playing cards, listening to country music and spending time with his family. After his retirement, Paul and Diane spent their winters in Florida with their many friends and fellow snowbirds. He was known for his quick wit, easy laugh and his compassionate spirit.

Paul is survived by his wife, Diane; his three children, Donna Geer, Mike Wallace and Joanne Goodman; his sister, Darlene Williams (Steve); daughter-in-law, Aditi Jariwala; son-in-law, Joseph Goodman; five grandchildren, Joshua Goodman, Janey Wellons, Brendan Geer, Julia Goode and Heather Geer; and two great-grandchildren. He also leaves behind several nieces, nephews and cousins. Funeral service will be held December 20, at Bon Air Baptist Church by invitation only. In lieu of flowers, donations can be made to Bon Air Baptist Church in Richmond, Va.
To plant trees in memory, please visit our Sympathy Store.
Published by Richmond Times-Dispatch on Dec. 6, 2020.
MEMORIAL EVENTS
Dec
20
Funeral service
Bon Air Baptist Church
, Richmond, Virginia
GUEST BOOK
7 Entries
I´m so sorry to hear of Pauls passing. My mom was his sister and she passed in February so believe me I know how hard this is. It gives my heart great comfort to know they are together again in Heaven with their other sibling Charlie. My mom loved her brother (Uncle Paul) very much and often spoke of their many silly phone conversations as they lived too far apart but remained very close. He always made her laugh and they have always had a special relationship. She adored Diane and the entire family. He will be greatly missed. My heart goes out to the entire family
Tamara Hescott and Family
December 8, 2020
Sending my deepest sympathy to Diane and family... Paul was a true gentleman. He will be missed. Melinda
Melinda Mahan
December 6, 2020
He was my friend and one of the best Pool V players of all time!. I will miss him and his smile after the Spike! Rest in peace my friend.
Timothy Tuck
Friend
December 6, 2020
We will miss our brother in law greatly, especially his sense of humor! So many wonderful memories and trips with Diane and Paul. Our sincere condolences to the whole family. Much love to you all.
Paul and Jean Cunningham
December 6, 2020
My heart goes out to the family. Sending prayers.
Jamie Like
December 5, 2020
Donna, Sending my deepest condolences to your family in your time of bereavement.
Angela Woodley
December 5, 2020
I will miss Paul so much. Although he was my Dad´s first cousin, he always seemed more like an Uncle to me. I have so many great memories. He was such a pleasure to be around and always brought joy and laughter to our family gatherings.
Vicki Huskey Linebaugh
December 5, 2020