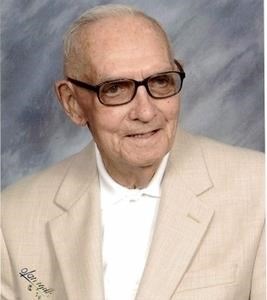 FUNERAL HOME
Bennett Funeral Homes - Richmond
3215 Cutshaw Ave
Richmond, VA
ALCORN, Quentin G. "Al", of Richmond, Va., formerly of LaGrange Park, Illinois and Calabash, N.C., died peacefully on July 22, 2021, a few weeks after a family celebration of his 98th birthday. Born in Poseyville, Ind., Al was the son of the late Betty and Corry Alcorn. He served in the Army in France and Germany during World War II and was awarded the Purple Heart and Silver Star. Following his graduation from Indiana University, Al relocated to Chicago, where he met his future wife, Chris, and spent his career with Sears, Roebuck & Co. in a variety of management roles. In retirement, Al and Chris headed south to North Carolina, where they enjoyed golf and traveling. After moving to Richmond, he became very active as a volunteer at St. Mary's Hospital and at his church, Trinity Lutheran. In addition to his parents; Al was preceded in death by his wife of 54 years, Mae "Chris" Alcorn; his son, Michael Alcorn; his grandson, Quentin Thomas Alcorn; and his sister, Esther Butler. Al is survived by his daughters, Susan Alcorn of Elgin, Illinois and Carol Eggen of Vashon Island, Wash.; his son, Peter Alcorn (Marcia) of Richmond, Va.; and his grandson, Christian B. Alcorn. He is also survived by two special friends, Alyce Gere and Meg Kluck. The family would like to thank the staff at St. Mary's Woods for the compassionate care he received. Services will be private.
Published by Richmond Times-Dispatch on Aug. 1, 2021.
To plant trees in memory, please visit the Sympathy Store.
MEMORIAL EVENTS
To offer your sympathy during this difficult time, you can now have memorial trees planted in a National Forest in memory of your loved one.
Funeral services provided by:
Bennett Funeral Homes - Richmond
MAKE A DONATION
MEMORIES & CONDOLENCES
Sponsored by Bennett Funeral Homes - Richmond.
1 Entry
My thoughts are with you and your whole family.
Elspeth ( Beth) McClelland
Friend
August 1, 2021
Showing 1 - 1 of 1 results