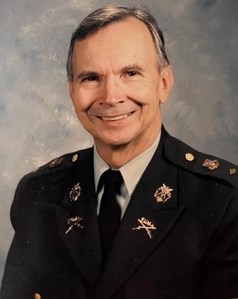 FUNERAL HOME
Sheridan Funeral Home
6093 Venable Rd
Kents Store, VA
FAIX, Richard D., 91, departed this life on October 16, 2021 surrounded by his wife and daughter. Born in Philadelphia, Pennsylvania, he was raised in Milford, Delaware. After attending Randolph-Macon College in Ashland, Virginia, he served three years in the Air Force, including a tour in Korea. After working for several years at Sear, Roebuck & Co. in Richmond, he went to Fork Union Military Academy where he taught physics and chemistry for 36 years. He played several instruments and played with the Second-Wind Band in Charlottesville, Virginia for many years. Besides being a talented musician, he was an artist and built many clocks as a hobby. He was predeceased by his parents, Gus and Ethel Faix; a sister, Marjorie; a brother, Bill; and a son, Tom. He is survived by his wife of 60 years, Euxine Dolbeer Faix; a daughter, Tracy Faix of Glen Allen, Virginia; a grandson, Aiden; a brother, Thomas L. Faix of Detroit Lakes, Minnesota; and many nieces and nephews. There will be a graveside service at Grace Episcopal Church in Bremo Bluff, Virginia on Saturday, October 23, 2021 at 11 a.m. In lieu of flowers, the family requests donations be made to Grace Episcopal Church, 754 Bremo Bluff Road, Bremo Bluff, Virginia 23022 or Fork Union Military Academy, Fork Union, Virginia. Arrangements are being handled by Sheridan Funeral Home in Kents Store, Virginia.
Published by Richmond Times-Dispatch on Oct. 21, 2021.
To plant trees in memory, please visit the Sympathy Store.
MEMORIAL EVENTS
Oct
23
Graveside service
11:00a.m.
Grace Episcopal Church
Bremo Bluff, VA
Funeral services provided by:
Sheridan Funeral Home
MAKE A DONATION
MEMORIES & CONDOLENCES
Sponsored by Sheridan Funeral Home.
10 Entries
Euxine. We were so sorry to hear your husband had passed away. You and your family will be in our prayers. God be with you.
Tom and Shirley LeVines
Friend
October 26, 2021
Major Faix was a great teacher and a great man. Prayers to his family for comfort. Rest In Peace
Greg Zuvich
October 22, 2021
See you later, Dick. I'll be missing your warm friendship.
Lowell Vaught
October 22, 2021
Capt. Faix was one of the most influential instructors I had at FUMA. He was an outstanding teacher and mentor. I studied physic and electricity under him which led to a 35 year career in the Air Force doing Airborne Electronic Warfare. My condolences to the family.
Harold Bowman, FUMA '68
October 22, 2021
He was a great no nonsense teacher. He made it interesting through demonstrations... I remember many of his demonstrations 42 years later. He got the point cross!
David M McCullough
School
October 22, 2021
I had Mr. Faix for Physics as a post graduate at FUMA. He was an excellent teacher and wonderful person. Prayers of support for his family.
Richard Smith
School
October 21, 2021
I had him for physics my senior year. Prior to that I didnt have much interest in science but he inspired me and I went on tho have a very successful career in the Navy as a radar technican. Truly one of the better teachers I ever had.
Charles Campbell
School
October 21, 2021
To a dear friend mentor teacher..Maj..you were an inspiration and a guiding light..FUMA.. model planes and a love of sharing your craft...made you who you are..Know that you inspiration lead me to the stars...Safe travels on your journey home..CAVU..weather and tailwinds my friend..
Aldo Sibi
Friend
October 21, 2021
I have fond memories of Major Faix. He was a great teacher, and I enjoyed his stories and demonstrations. My condolences to his family.
Tim Curtin, FUMA `81
School
October 21, 2021
So sorry to hear about Mr Faix´s passing. Please know my prayers are with you and Tracy.
Rick Aasen
Friend
October 21, 2021
Showing 1 - 10 of 10 results