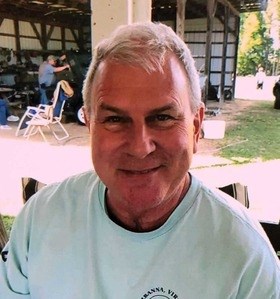 FUNERAL HOME
Monaghan Funeral Home & Cremation Services
7300 Creighton Pkwy
Mechanicsville, VA
WILDER, Ronald Bruce, "Ron," of Henrico, died on Sunday, July 11, 2021. He was the son of Bruce C. Wilder and the late Florence E. Wilder. He was passionate about his family and would do anything for them. Ron looked forward to his fierce weekly card games with his dad and he was very proud of his daughters and their achievements. He had a love for boating, being on the water, dancing and making up crazy lyrics to songs. He competed as a powerlifter in his earlier years and remained a diehard Redskins fan. Ron was an electrician and was extensively involved with the BCTGM Local 358 for 22 years, where his selfless service as a shop steward, chairman of the grievance committee and representative on the safety committee displayed his complete dedication to the wellbeing of his friends and coworkers. His steadfastness in these positions earned him the unwavering respect for his character that was well deserved. He was also a member of the IBEW Local 666 for over 30 years. Ron is survived by his daughters, Erin Marchetti (Renno) and Rhea Wilder (Neiko); Susan Wilder, the mother of his children; his father, Bruce Wilder; his brother, Rick Wilder (Niki); sisters, Debbie Shobe (Chris), Barbara Cottrell and Sandra Frazier (Steve); his girlfriend, Tracie Fowler and her granddaughter, Adalyn; as well as a host of family and friends. Ron's family will receive friends from 2 to 4 and 6 to 8 p.m. on Friday, July 16, 2021, at Monaghan Funeral Home, 7300 Creighton Pkwy., Mechanicsville, Va. 23111. His funeral will be at 3 p.m. Saturday, July 17, 2021, at Monaghan Funeral Home, 7300 Creighton Pkwy., Mechanicsville, Va. 23111. In lieu of flowers, donations can be made to The National Suicide Prevention Lifeline (suicidepreventionlifeline.org).

To plant trees in memory, please visit our Sympathy Store.
Published by Richmond Times-Dispatch on Jul. 15, 2021.
MEMORIAL EVENTS
Jul
17
Funeral service
3:00p.m.
Monaghan Funeral Home and Cremation Services
7300 Creighton Pkwy, Mechanicsville, VA
Funeral services provided by:
Monaghan Funeral Home & Cremation Services
MAKE A DONATION
MEMORIES & CONDOLENCES
Sponsored by Monaghan Funeral Home & Cremation Services.
3 Entries
With deepest sympathy to Ron´s family.... You will be missed but never forgotten. Friend and coworker..... NABISCO
Gail J. Edwards
Work
July 20, 2021
Brother you will surely be missed. RIP
Butch Richardson
Work
July 16, 2021
My deepest condolences to the family and prayers. I worked close with Ron on the safety committee and he used to say "with both of us grinding on safety we will get things done" and thT we did. He taught me so much and I appreciated evety min. We laughed we joked so many times but when it came to work he was there to do his job. We where able to talk about so much for our time working together. He would stand up for what he believed in know matter what. My heart was filled with so much sadness on his passing. I will never forget him "Ron the person" whom he was. My friend and my co-worker. GOD BLESS THE FAMILY AND FRIENDS.
Billie jean sampson
Work
July 15, 2021
Showing 1 - 3 of 3 results