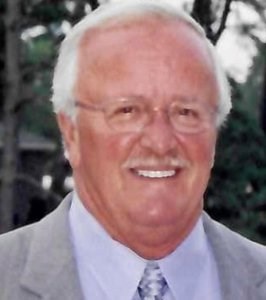 FUNERAL HOME
H.D Oliver Funeral Apartments
2002 Laskin Road
Virginia Beach, VA
SAWYER, Wayne Clarke, Sr., born August 14, 1943, passed away into the arms of his Lord and Savior on November 19, 2021. Son of Paul Clarke Sawyer and Virginia Weaver Sawyer, he grew up in the City of South Norfolk, now the City of Chesapeake. Wayne attended Rena B. Wright elementary and in the second grade he met a very sassy, blonde, ponytailed girl who would be a very important part of his life for years to come. In the small community, Wayne enjoyed dancing, playing football, baseball, ice skating and roller skating with his friends. He and his family were avid members of South Norfolk Baptist Church. At a very early age, Wayne learned the meaning of hard work spending time with his dad at the racecar shop. He fell in love with automobiles and racing them. Later in life, he learned how to build motors with Billy Gwynn and the ultimate thrill of drag racing. But most of all, he loved spending time with his grandfather, fishing and hunting.

At the age of 14, the Sawyer family moved to Wayne McLeskey's newly built Chesopeian Colony in Virginia Beach. He attended Princess Anne High School, where he met his future wife, Sandy Parker. Wayne continued his education at Augusta Military Academy participating in football, wrestling, lacrosse and roller rifles. He accomplished the rank of 2nd Lieutenant and graduated in 1963. Multiple summers were spent working for PECK Iron & Metal, learning to operate bulldozers, backhoes, forklifts and 18-wheel tractor trailers. He also enjoyed spending time on the beach lifeguarding and surfing.

Wayne studied at Elon College and went on to marry his high school sweetheart, Sandy. They had three sons together, John Clarke Sawyer and twins, Wayne Clarke Sawyer Jr. and Paul Sean Sawyer. His work and career began with JK Parker, constructing mobile school classrooms. He was a field superintendent for John Aragona Sr. and maintenance supervisor for Wayne McLeskey at Regency Apartments. For the next seven years, Wayne assisted Mr. McLeskey with the building and management of Lynnhaven Dry Storage Marina.

After a life changing operation, he began a new career as a commercial real estate agent. In 1979, he was reunited with that sassy, blonde, ponytailed girl from the playground, Theresa Allard Brock. She introduced him to the game of golf in which he accomplished a handicap of eight. He later became the president of Redwing Men's Golf Association in Virginia Beach and would eventually draw a group of investors to develop the Dominion Country Club in Hanover, Va.

Wayne joined the family business in 1987 at Richmond Fairgrounds Raceway. He took on the job of reconstructing the half-mile flat track with 26,000 seats, redesigning it into a quarter-mile track with 14-degree banking and with that, Richmond International Raceway was born. Quite an accomplishment in six months' time. When RIR was sold in 1999 to International Speedway Corporation, the speedway boasted 36 suites and 106,000 seats. He and Theresa returned to Virginia Beach in 2000. Because of his love of deep-sea fishing, he became a member of the Cape Henry Billfish Club and later held the titles of tournament chairman and president. He was also a member of the Hatteras Marlin Club, as well as a founding board member of the Virginia Beach Billfish Tournament. He truly loved being a part of the fishing community and cherished his many friendships and comradery of his fellow anglers.

Wayne was a person who always wanted to help others and in doing so, he was a great benefactor of the United Ostomy Society of America, CHKD, EVMS, Sloan Kettering Cancer Center, American Cancer Society, Virginia Beach Rescue Squad and BOD member of Home Now. He enjoyed serving on the BOD for Monarch Bank, as well as Towne Bank and was a member of Trinity Church in Virginia Beach.

A special thank you to Dr. Thomas Alberico, Dr. Michael Fabrizio, Dr. Greg Clifford, David Abraham, nurse, Elisa Kasiski and Heather Kwiatkowski (Generations Home Health Agency), nurse, Teri Smith, nurse, Dana Suess (Suncrest Hospice). Generations treated our family with kindness and love through Wayne's journey; for that we are very grateful. Services will be held at London Bridge Baptist Church, 2460 Potters Road, Virginia Beach, Va. 23452, on November 27, 2021. Visitation will be from 12 to 2 p.m. with a service following at 2 p.m. In lieu of flowers, please consider a donation to any of the above referenced charities. Online condolences may be made to the family at hdoliver.com.
Published by Richmond Times-Dispatch on Nov. 23, 2021.
To plant trees in memory, please visit the Sympathy Store.
MEMORIAL EVENTS
Nov
27
Service
12:00p.m. - 2:00p.m.
London Bridge Baptist Church
2460 Potters Road, Virginia Beach, VA
Nov
27
Service
2:00p.m.
London Bridge Baptist Church
2460 Potters Road, Virginia Beach, VA
Funeral services provided by:
H.D Oliver Funeral Apartments
MAKE A DONATION
MEMORIES & CONDOLENCES
Sponsored by H.D Oliver Funeral Apartments.
15 Entries
Theresa and family I am truly heartbroken at the loss of Wayne who was an inspiring person and friend for the psst 20 years. He is sorely missed by his friends and community that he cared so deeply for and I am proud to have known him. God bless you in your keeping of his spirit and legacy.
John Milleson
December 1, 2021
Aunt T, I am giving you huge virtual hugs. I will miss Uncle Wayne for the rest of my days. He was such a character and so easy to love. William teased me about always needing an interpreter because of that thick accent of his but that just added to the mystery that is The Wayne Sawyer. John, Clarke and Sean you were the pride of his life. RIP and know that you mattered, you were loved and you will be missed until we rejoin you at the big racetrack in heaven.
Jill Patterson
November 29, 2021
I have had the pleasure of knowing Wayne for many years. He graduated from Princess Ann High School with my late brother Jim. We would see each other at local fishing tournaments. Wayne was a fine gentleman and will be missed by many. Rest in Peace old friend
john crowling
November 28, 2021
John & I send love & our deepest sympathy to Theresa & family. Wayne was a great man. I remember how fond my dad was of Wayne when they used to have coffee together in Richmond yrs. ago.
Judy Aspinwall
Friend
November 26, 2021
Speaking for all Wayne´s brothers from AMA We are sorry for your loss We Will honor his life at our founders day ceremony next fall Blessings to his family and friends
Gordon Metz
School
November 25, 2021
So sorry to read of Wayne´s passing. Thoughts and prayers to his entire family. Was blessed to grow up and work for many years in the NASCAR industry following in my dad´s footsteps who worked for many years with the Sawyers. Wayne was always fun to spend time with as well as amazingly kind. So sorry for your loss.
Tim Sullivan
Friend
November 25, 2021
We were saddened to hear of Wayne´s passing. He is now at perfect peace. Our hearts go out to the Sawyer family. Birdneck Point has lost a great neighbor. You will be missed.
Cathy and Bruce Chisholm
Other
November 25, 2021
My sincere sympathy to Theresa and the Sawyer family. May God be with you during this difficult time.
Patricia A Redmon
November 25, 2021
Wayne, was a man of incredible integrity, compassion and commitment to his family and friends. We are truly honored to have known him as a cherished friend and we will miss him more than words could ever convey. We are praying for his family, and their peace and comfort during this very difficult time. Wayne was one of a kind, a true gentleman and will be missed dearly.
John & Patty Frankos
Friend
November 24, 2021
Thank you Wayne for all of your generous contributions to our community. You will be missed. Deepest sympathy to Theresa and your whole family.
Larry and Suzy Oleszko
Friend
November 24, 2021
My sincere sympathies to the Sawyer family. As well, to those who had the pleasure of meeting Mr. Sawyer. I worked at a Acceptance Finance Corporation where I had the pleasure of meeting Mr. Sawyer and his other family members when I was young and they were rebuilding the dream of the Richmond International Raceway! It was exciting to watch Nascar take off and become so popular as it did based on RIR! Even today, it is a major race in the series! Something this family may be proud! My feeling is Mr. Sawyer and his family are more proud of their charitable contributions. Which says more about the person and goes hand in hand with the very nice man and family I had met so many years ago. Again, my prayers and thoughts are with you all during this time. Sincerely, Janet L.Ziolkowski (business contact)
Janet L Ziolkowski
Work
November 23, 2021
Wayne was a wonderful man and loved his family more than anything. I pray that God will comfort all of his family now and in the days to come.
Tina Gentry
November 23, 2021
It was our privilege to serve Wayne at All-Med Express for almost 20 years. Our sincere condolences to his family.
Cynthia Bradley
November 23, 2021
So sorry to read this sad news. Hugs & prayers to the entire Sawyer family during this time of grieving. Wayne was a joy to be around & will be missed by all.
Nancy Peregoy
Friend
November 23, 2021
It was a great honor and privilege to work for Wayne. His kindness, generosity and most of all, his zest for living gave us many memories that we will treasure for years to come. To Miss T, Bill and the entire Sawyer family, we share your grief. Please know that our prayers are with you.
Ed and Irene Sayers
November 23, 2021
Showing 1 - 15 of 15 results