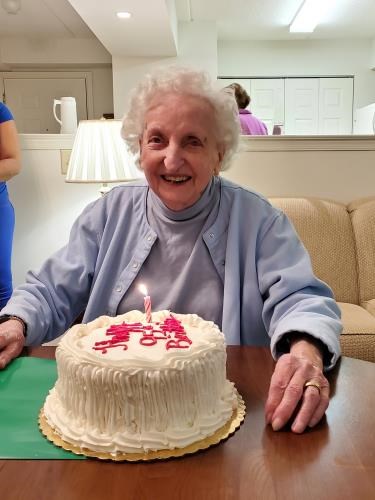 FUNERAL HOME
Boyd-Horrox-Givnish Funeral Home
200 West Germantown Pike
Norristown, PA
Margaret Mary Flannery “Peggy” (nee Burke) of Norristown, passed away peacefully on Tuesday October 26, 2021. She was 96 years old. Born January 17, 1925 in Mahanoy Plane, PA, she was the daughter of the late Cornelius and Mary (nee Murphy) Burke, and the beloved wife of the late John J. Flannery, Sr. Peggy and her late husband John raised their son John Jr., in Norristown where they were members of St. Francis of Assisi Church. She enjoyed traveling with her husband to the shore, and to St. Simon’s Island. Peggy liked dancing, and rooting for the Phillies. Peggy is survived by her son John, J. Flannery Jr., Esq and his wife Loretta, two grandchildren, Sean Flannery and Kelly Flannery, as well as many nieces and nephews. She was preceded in death by her two brothers; Joseph and Thomas Burke and two sisters; Claire Gallagher and Loretta Stephens. Relatives and friends are invited to share in Peggy’s Life Celebration on Saturday October 30, from 9:30 AM to 10:20 AM followed by her funeral at 10:30 AM at St. Francis of Assisi Church, 600 Hamilton St. Norristown. Interment will be private at the convenience of the family. Family services are by Boyd-Horrox-Givnish of East Norriton. 610-277-700. In lieu of flowers, donations in Peggy’s name can be made to St. Francis of Assisi Church at the above address. To share your fondest memories of Peggy, visit www.lifecelebration.com
Published by The Times Herald from Oct. 27 to Oct. 28, 2021.
To plant trees in memory, please visit the Sympathy Store.
MEMORIAL EVENTS
Oct
30
Visitation
9:30a.m. - 10:20a.m.
St. Francis of Assisi Roman Catholic Church
Marshall and Buttonwood Sts., Norristown, PA
Funeral services provided by:
Boyd-Horrox-Givnish Funeral Home
MAKE A DONATION
MEMORIES & CONDOLENCES
Sponsored by TimesHerald.com.
3 Entries
Condolences to John and Loretta and to Gooder her neice (Clare Gallagher). Your Mom and Aunt was a friend of my mother. I am a priest and for many years celebrated Mass at the Greens where she lived. I will remember her at Mass. may she Rest In Peace. Aunt
Peggy will always be remembered for her wit and generous spirit . May she Rest In Peace.
Fr. Gregg Hickey
Family Friend
October 28, 2021
John you and your family are in our prayers from all of us at over at providence place mom will definitely be missed dearly by me I loved your mother dearly it was truly a blessing to had taken Care of her
Colleen
October 28, 2021
Dear Johno and family: I am so sorry to hear of the passing of your mother. She and my mom shared a friendship for over 60 years. She was a great lady. When taking her and my mom to church at Saint Francis on Sundays I would hear many stories of their coal region upbringing and working together at the local hospitals as nurses. I had a wonderful visit with your mom after my Mom passed away and just before Covid locked us down and will treasure that time always. I hope she and my mom Therese are having a great time in heaven. Thinking of you all at this difficult time.
Katrina Kniezewski
Friend
October 27, 2021
Showing 1 - 3 of 3 results