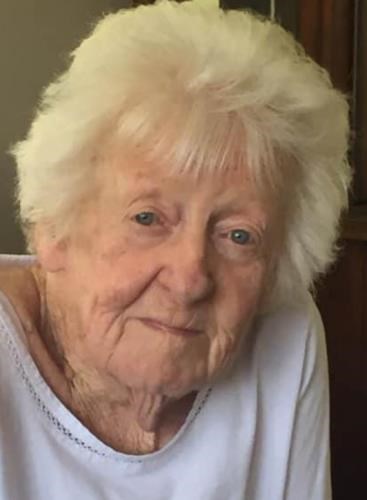 FUNERAL HOME
Bacchi Funeral Home & Crematory
805 DeKalb Street (Route 202)
Bridgeport, PA
Mary F. Jacobson (nee McManus), 92, of Graterford, PA, passed away on October 7, 2021. She was the wife of the late William D. Jacobson, Sr., whom she was married to for over 66 years. Born in Phoenixville, she was the daughter of the late James and Catherine (Kirk) McManus. She is survived by her sons, William (Leslie), Dennis, Gregory (Sue); daughter, Maryann Brandt (Frank); and three grandchildren: Christine, Scott and John. She is also survived by her brothers, Robert McManus (Marge), Richard McManus; her sisters, Rita O’Neill and Anne Dykie; as well as many nieces and nephews. She was preceded in death by a son, John Francis and her brothers: James, John and Francis. Mary was one of 8 children who grew up on a farm. She shared a close relationship with all her siblings and loved spending time with them. Mary was a retired waitress from Seven Stars Inn, where she worked for almost 40 years. Before that, she was employed by the Riverside Speakeasy and Collegeville Inn. Mary also worked at the Valley Forge Army Hospital, where she met her husband, Bill. Mary loved to travel, play bingo, go to the casino and go out with her sisters. She was a member of St. Eleanor Catholic Church and VFW Post 7155. Visitation will take place on Wednesday, October 13, 2021, from 10:00 A.M to 11:15 A.M. followed by Mass at 11:15 A.M. at St. Eleanor Catholic Church, 647 Locust Street, Collegeville, PA. In lieu of flowers, donations may be made to Children’s Seashore House of Philadelphia at www.chop.edu/giving. Arrangements are by the Bacchi Funeral Home in Bridgeport, PA.
Published by The Times Herald from Oct. 8 to Oct. 10, 2021.
To plant trees in memory, please visit the Sympathy Store.
MEMORIAL EVENTS
Oct
13
Visitation
10:00a.m. - 11:15a.m.
PA
Oct
13
Funeral Mass
11:15a.m.
St. Eleanor Catholic Church
647 Locust Street, Collegeville, PA
Funeral services provided by:
Bacchi Funeral Home & Crematory
MAKE A DONATION
MEMORIES & CONDOLENCES
Sponsored by TimesHerald.com.
0 Entries
Be the first to post a memory or condolences.