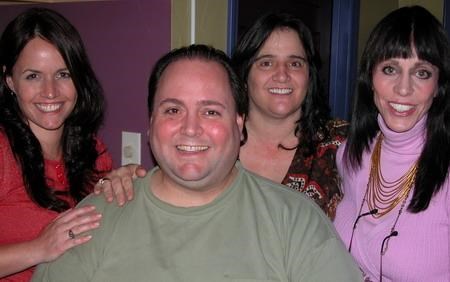 BORN
1963
DIED
2020
Bobby Acker, born on a sunny morning, July 21, 1963, eagerly began his life a month early, much to the surprise of his mother, Mary Julia Pendergast Acker, and his father, Robert Louis Acker. Anyone who knew Bobby remembers him as a whirlwind of joy and curiosity. For several decades, beginning in childhood, Bobby, along with his sister, Juliana Acker Williams, played active roles in Vallejo's Children's Theater. He loved the camaraderie and excitement of being involved in theater and made many lifelong friends because of his boundless enthusiasm and constant desire to materialize what he envisioned. Using his vast repertoire of technology and creative ideas, Bobby designed and implemented the haunted house at Vallejo's Children's Wonderland every October. He was an avid Pez collector, attending Pez conventions every year, and making many new friends from around the world.A graduate of Vallejo Senior High School, Bobby attended Hayward State College and became a Microsoft specialist and Graphics Designer, building and managing websites for clients. Bobby was also an in-house IT specialist for large companies.Bobby had debilitating psoriatic arthritis his entire adult life, although few of his friends and acquaintances knew it because he didn't complain, just pressed on despite health obstacles. In recent years, new and unrelated illnesses beset him. Bobby passed away peacefully in his sleep, the world had lost the gleam in his eyes, the joy of his laughter, the adventure of his next new idea.He was preceded in death by his great-grandparents, Dave and Julia Slawson of Vallejo, his grandfather, Bill Pendergast of the Fighting 211th Division of the US Army of Waltham, Massachusetts, grandparents "Nana" Penny and Bob Acker Sr. of Vallejo and his father Bob Acker Jr. of Vallejo.He leaves behind his loving significant other, Sharon Terry of Columbia, California, mother, Mary Julia Klimenko and stepfather, William Decker, sisters Juliana Williams and Sarah Raahauge, grandmother Dorothy Pendergast, uncles and aunts: Bill and Denise Pendergast, John Pendergast, Dan Pendergast, Matt, and LeeAnn Pendergast as well as cousins on both coasts too numerous to list. Exceptionally fond of his nieces and nephews, Daniel Atalig, Jordan Atalig, Lorenzo Sierra, Ireland Ingle, Julian Nededog, Logan Williams, Devin Atalig, Jaelynn Atalig, and Carter Atalig. He randomly surprised each with gadgets, toys, and information pertaining to each child's interests as well as lectures related to the importance of education. Bobby also became a very special person in the lives of Sharon's children, Katie, Isabella, Jaimie DeCoste and Jennifer. Together Bobby and Sharon fostered several children in recent years, five of which continue in Sharon's' care.When the COVID-19 quarantine has passed, there will be a celebration of his life at the Benicia, California, Portuguese Hall. He was their webmaster/developer and cousin to many members, including his godmother, Nancy Robertson. Bobby's great grandparents, Francis and Mary Lewis, settled in Vallejo, California from the Azore island of Sao Jorge.
W00143120-image-1.jpg

To plant trees in memory, please visit our Sympathy Store.
Published by Times Herald Online on Apr. 12, 2020.
MEMORIAL EVENTS
No memorial events are currently scheduled.
To offer your sympathy during this difficult time, you can now have memorial trees planted in a National Forest in memory of your loved one.
MAKE A DONATION
MEMORIES & CONDOLENCES
7 Entries
Fond memories of Bobby and the years our daughters had theater classes with him as well as a good number of years as GVRD haunted house volunteers, sincere condolences ❤
Laura L Smith
Acquaintance
July 6, 2021
We had differences of opinion, but I always admired your devotion to family, especially your mother. Your nephews all worshipped you, for good reason. Your courage in a life of difficulty always shone through. Your character and integrity was always evident in your conversations and deeds. I dare say there was never a better son or Uncle. You family, community and the world was fortunate to have you. May God continue to bless you as you continue your journey beyond the veil. May your family be blessed with comfort in their hearts and be able to dwell upon all of their moments of joy, laughter and happiness shared with you.
Steven Lindsey
Acquaintance
April 10, 2021
I was in Children's Theater with Bobby and he was so talented I wanted to be just like him. Please accept my sympathies to his family and friends.
Mark Coronado
Acquaintance
July 27, 2020
Im so sorry to hear of Bobbys passing. We went to school together and he always had a smile and spoke kindly. He will be missed.
Melinda Milo
Classmate
May 6, 2020
Prayers to his family he and I went to school together also my father owned hot dog stand at children's wonderland...he was a great guy who will truly be missed rip bobby
Jamie allen
Friend
May 3, 2020
May God's promise found in John 6:40, of the hope to see our loved ones again, comfort your heart and give you peace, strength, and hope in the days ahead.
April 15, 2020
We are very sorry for your loss!!! May his soul rest in peace!!!
With love always,Ron & Deme Stall- Nash and family.
Demetra Stall - Nash
April 12, 2020
Showing 1 - 7 of 7 results