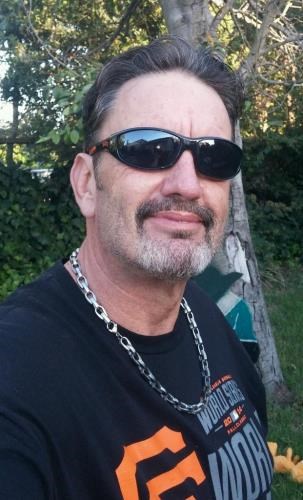 FUNERAL HOME
Twin Chapels Mortuary
1100 Tennessee Street
Vallejo, CA
Duane Bradley Dill died suddenly on October 4 at the age of 63. Duane was proud of the fact that he was born in Sanitarium, CA in Napa County. His parents, Donald and Betty Dill, were lifelong Californians. He graduated from Vallejo Senior High in 1976 and continued his studies at both Napa and Solano Community colleges. He and Freda, his wife of 32 years, married on July 22, 1989. Duane loved his pet dogs, especially their longtime canine companion, Isis Dill and most recently, Darlene Dill who they adopted from the Humane Society in June of this year.Duane is survived by his wife, Freda; daughter, Samantha Allen-Matthews; and grandsons, Ronnie and KJ. Duane also leaves behind his brothers, Kevin and Gary.Duane worked at Mare Island Naval Shipyard as a Nuclear Pipefitter from 1981 to 1996. After Mare Island closed he worked at various Nuclear Power Plants and with PG&E. He also spent time working at Home Depot where he was an instant favorite of customers and employees alike.Duane was a great fan of both the San Francisco Giants and the 49ers. His second favorite baseball team was whoever was playing the LA Dodgers. He was known to close most messages and posts with: FTD.A celebration of life will be held at the Florence Douglas Center in Vallejo on October 29 at 5 p.m. Please RSVP in advance via email to: [email protected] and arrangements entrusted to the direction and care of Twin Chapels Mortuary, Vallejo. www.TwinChapelsMortuary.com (707) 552-6696.
W00159070-image-1.jpg

Published by Times Herald Online on Oct. 17, 2021.
To plant trees in memory, please visit the Sympathy Store.
MEMORIAL EVENTS
Oct
29
Celebration of Life
5:00p.m.
Florence Douglas Center
Vallejo, CA
Funeral services provided by:
Twin Chapels Mortuary
MAKE A DONATION
MEMORIES & CONDOLENCES
Sponsored by Twin Chapels Mortuary.
12 Entries
I still can not believe you are gone. You will be ever so missed by many. Give my hubby a hug for me, Chris and Richard too. Love you my friend. I will see you on the other side.
Mary Huggins
Friend
November 4, 2021
Deepest condolences from Joe and Jamie on Double D´s passing. We will miss his smile and sense of humor. Always considered him a gods man and friend.
Joe Fields
Friend
November 4, 2021
I knew Duane since the early part of the 70's. We grew up in the same neighborhood and he was one of the guys that "hung out on the corner" with the rest of us. Somehow Duane was one of the group I seemed to run into from time to time and although it had been many years in between each run in, he always knew who I was. Now I'm talking about seeing him at my first Day on The Green concert I went to. How do you run across someone in over 50,000 people but there he was, his wonderful smile and all! Or the next time it was at a Giants Game!! I just happened to look down at the walkway just as Duane was strolling by, I yelled "Duane" and he turns and smiles and yells back "Jeana" and waves. I remember thinking how COOL it was that after all that time had passed ,he still remembered me. I am so sorry for your loss. I have to say FTD one last time for you Duane! God Bless
JEANA LOFAS
October 29, 2021
So sorry for your loss, Duane was a Great man , friend and Husband. Duane will truly be missed.
Michael West
Friend
October 27, 2021
To Freida and family, We are shocked and saddened by Duane's passing! Our condolences, may your memories of him comfort you always. Hugs, Pat
Pat Pat Molinar-Jeffers and family
Friend
October 23, 2021
Freda and Sam, Roger and I are so sorry to hear of the passing of Duane. Please know that we are there for you if you need anything. Hugs, Roger & Carol Hardy.
Carol Hardy
October 23, 2021
My condolences go out to Freda and the family. I met him at work and played fast pitch with him and against him for many years. He could come across a bit hard to some but inside he had such a big heart. You knew where you stood with him. A life cut short but rest assured, DD did not get cheated when it came to having a good time. I will miss him very much.
Curt Grigg
October 18, 2021
when i see your picture i remember your smile and laugh when you get to where you're going say hi to willie mcovey and all the other giants and be nice to the dodgers
tom connaughton
Work
October 18, 2021
We are very sorry to hear that Duane passed away! He was a very funny guy who always made me laugh out loud! We will miss his FTD ;) May his soul rest in peace! Sending prayers for all! With Love Always Ron Deme Stall-Nash and family
Demetra Stall Nash
October 18, 2021
My sympathy to Duane´s family. Very sad to hear of his passing. Although I hadn´t seen Duane in many years I recall him being a great guy.
John Bailey
Friend
October 17, 2021
My heart goes out the Duanes family, I might have not known Duane very well as I was to young when both Duan and Frida and my parents were best of friends but I'm sure he was as great of a guy as everyone says, so sorry for your loss Samantha and Frida
Brittney wood
October 17, 2021
My Cousin my you rest in peace, you were such a fun loving person. I will miss you, tell everyone up there Hi Love you Kelley
Kelley L MacInnes
October 17, 2021
Showing 1 - 12 of 12 results