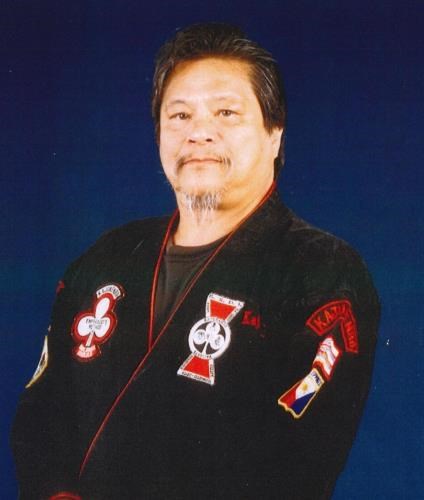 Emil passed away on Monday, August 30, in Medford, OR, at the age of 82. He was born in Alameda and raised in the Fairfield/Suisun Valley area by his parents Emilio and Teodora. He attended Armijo High where he excelled in sports and joined the Army right after graduation, serving in the Military Police.After re-entering civilian life his day job was filling vending machines, working for Catermat and then Pizante Music. Later he worked for Breuner's Furniture as a warehouseman, always a member of the Teamsters Union. His weekend job was tending bar at numerous clubs in Vallejo, which included The Melody Club, The Fireside Lounge, Denny's, Coronado Inn, San Marcos/The Country Club, and the Rendezvous in Fairfield. His evening (he never called it a job) fun, his passion was teaching the Martial Arts, especially his art, Kajukenbo. This passion would lead him to open his school in 1968 at 974 Benicia Rd. in Vallejo in 1968, where it is still open some 53 years later. He never once forgot his children, who were the reason he had all those jobs.He is survived by Betty, his partner, his translator and his best friend and wife of 42 years; a brother and best friend, Tom (Judy); sister, Lita; beloved sons, Joseph (Blesila), Lawrence (Sherri), Steven (Rebecca), and Robert (Wendy); cherished daughters, Debra (Tony), Teodora "Tootie" (Dave), and Sandra; his pride and joy, 15 grandchildren, Tara, Joseph, Jr., Lawrence Jr., Myrhissa, Ted, Taellon, Steven, Jr. Coeli, Bailey, Annaleen, Meggann, Shainen, Shaharazade, Kayla and Amaya; his incredible six ½ great grand-children, Lynn, Raelyn, Kaia, Amara, Kitchara and Kimmy and one more on the way; two astonishing great-great grandchildren, Aubrianna, Khalil, with one more soon-to-be added. He leaves behind to mourn his loss, many nieces, and nephews, 48 Black Belts, seven honorary Black Belts and thousands of students. This was his legacy.He received his first Black Belt in Kajukenbo in June of 1966 and through the years he ascended the ranks, finally receiving his 9th Degree with the title Grand Master in 1999. In 2014 in Las Vegas, NV he received the title of Senior Grand Master, along with a very select few. He was featured in articles in "Black Belt" as well as "Inside Karate" and "Inside Kung Fu" magazines, inducted into the World Martial Art Masters Hall of Fame, in 2007 into the Filipino Martial Art International Hall of Fame; he was chosen by one of the founders of Kajukenbo, Sijo Adriano D. Emperado himself, to serve as a member of the Original Board of Advisors for Kajukenbo and welcomed into the American Kajukenbo Association's "Council of Grand Masters."He dedicated his life to the Martial Arts; he lived and breathed Kajukenbo, devoting all hours of the day and night to working on and dissecting forms and techniques. He jokingly called the school "the school of continuous modification," but it's true. He never left anything standing if it could be knocked down and improved or made more sensible or easier for everyone to do. He loved Kajukenbo with a passion and it showed. It showed in how many quality Black Belts he produced, in the number of students who came to learn from him, and who then sent their children and grandchildren to learn from him. It showed in the number of those students who would return years later as adults to thank him for everything they learned, not just the martial arts but life lessons that have helped them throughout their adult lives. It showed in the number of people who would attend a seminar at which he was teaching. It showed in all the years the school was invited to do a demo at the Solano County Fair (estimated at 45 years in a row), the State Fair, the Filipino Festival (10 years in a row) and is especially evident in the over 300 people who have already reached out to the family paying their respects and asking to be given something to do, to help in some way.A Mass will be held Friday, October 8 at 11 a.m. at St. Catherine's Church, 3450 Tennessee St. in Vallejo and the following day, Saturday, October 9, at Blue Rock Springs Park on Columbus Parkway there will be a 974 Kajukenbo-style Celebration of Emil's Life starting at 11 a.m.. Martial Artists please bring your gi. Everyone is invited to attend one or both days.Mahalo with loving respect, the Bautista family.
W00158770-image-1.jpg

Published by Times Herald Online on Oct. 6, 2021.
To plant trees in memory, please visit the Sympathy Store.
MEMORIAL EVENTS
Oct
8
Funeral Mass
11:00a.m.
St. Catherine's Church
3450 Tennessee St., Vallejo, CA
Oct
9
Celebration of Life
11:00a.m.
Blue Rock Springs Park
Columbus Parkway, CA
MAKE A DONATION
MEMORIES & CONDOLENCES
2 Entries
I first walked into 974 Benicia Rd. over 51 years ago. Through all the hours spent training, at tournaments, at promotions, at demonstrations. Emil was the best Ambassador Kajukenbo could have hoped for. His love of Kajukenbo, his family, his students was obvious to anyone who spent any time around him. I called him by many different names over the years... Sensei ( way back when), sifu, sigung, professor, Grand Master, Senior Grand Master, but the one constant through all the years was "My Friend". I'll miss you Emil, as will all the many people who knew you. RIP my friend.
Dave Laughren
October 7, 2021
I have know Emil for over 50 years, starting when he worked for the Pizante family and when he opened his Martial Arts School on Benicia Road. He was always a dedicated individual, especially to helping young people. I always cherished our visits. My deepest sympathy go out to his family. He was a good man...Rest in Peace Emil Terry Curtola
TERRY CURTOLA
Friend
October 6, 2021
Showing 1 - 2 of 2 results