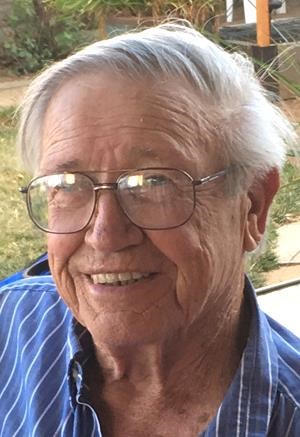 BORN
1932
DIED
2019
FUNERAL HOME
Passalacqua Funeral Chapel
901 West Second Street
Benicia, CA
James E. "Jim" Cooper, 86, of Benicia passed away after a short illness Wednesday in a local hospital. He was born in El Dorado, OK and lived in San Pablo for several years before finally settling in Benicia in 1973. Jim was a veteran of the United States Army and the Korean War and was a member of the Disabled American Veterans. Jim worked for the U.S. Government for almost 35 years, beginning at Alameda Naval Air Station and later at Concord Naval Weapons Station.Jim and his wife Cynthia also have owned and operated Cooper's Doll House Studio in Benicia since 1979, many of those years in the Tannery building. Jim was a master repairman and builder of doll houses. He was an avid gardener and shared his produce with neighbors. Jim played baseball in the major/minor Cleveland Indians baseball organization and was still under contract when he was drafted into the Army in 1952. He coached baseball for more than 20 years in both San Pablo and Benicia, and played with the Benicia Old Timers. Jim is survived by Cynthia, his wife of 62 years; daughters, Kim Cooper and Amy (Aaron) Hartley; son, James Cooper; grandchildren, Sarah (Mike) Pillion, Amanda (James) Blackwell, Emily Cooper and Maegan, Dylan and Dane Hartley and his great grandchildren, Abigail Pillion and Hailie Blackwell and Asher Blackwell expected this month. He was preceded by his brother, Elda Lee Cooper in 2008.A Celebration of Life including Military Honors will be held 11 a.m., Saturday, Feb. 23, at Passalacqua Funeral Chapel. Burial will be private. Family prefers donations to Benicia Veterans House Commission, 1150 First Street, Benicia or Benicia Little League c/o Rebuilding Fitzgerald Field, P.O. Box 296, Benicia, CA 94510. Please visit the online tribute at www.passalacquafuneralchapel.com. Arrangements entrusted to Passalacqua Funeral Chapel, 745-3130.
W00128110-image-1.jpg

Published by Times Herald Online from Feb. 10 to Feb. 23, 2019.
To plant trees in memory, please visit the Sympathy Store.
MEMORIAL EVENTS
Feb
23
Celebration of Life
11:00a.m.
Passalacqua Funeral Chapel
CA
Funeral services provided by:
Passalacqua Funeral Chapel
MAKE A DONATION
MEMORIES & CONDOLENCES
Sponsored by Passalacqua Funeral Chapel.
5 Entries
My condolences to the bereaved family and friends. May you rejoice in the Most High, who is our helper, especially in times like this. (Psalm 70:4, 5)
JJ
February 22, 2019
I knew him through the miniature community and he taught me a lot. Jim will truly be missed
Sigrid Williams
February 21, 2019
Jim's skills as a builder of miniatures were unparalleled. I will never forget his can do attitude and abundant patience when he helped me craft the corner windows in my Let It Snow! Miniature Shoppe. A seemingly impossible task was rendered achievable, thanks to his amazing talents and dry humor! Jim was someone that I thought would go on forever, like the Energizer Bunny! I will miss his wit, his skills, and talking baseball with him. His passing is a great loss to our community of miniaturists. My heart and prayers go out to his family. Jim will be missed so much. Blessings,
Kathleen Stats
Kathleen Stats
February 20, 2019
I am so very sorry for your loss. Jim will be deeply missed by the mini community. My thoughts are with you.
Cathy Ellison
February 20, 2019
Offering our deepest condolences during this difficult time.
Passalacqua Funeral Chapel
February 10, 2019
Showing 1 - 5 of 5 results