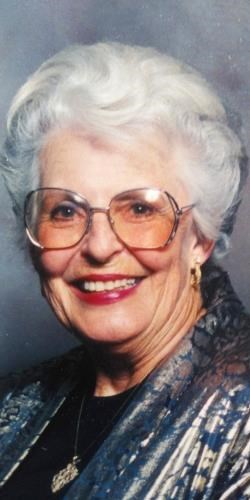 BORN
1929
DIED
2021
Louise Marie DeBenedetti, a long time resident of Vallejo, passed away at the age of 92 on October 12, 2021. Born in Los Angeles on September 17, 1929, she was the daughter of Lyman and Nora Oakley. She grew up in the small town of Snelling, CA, and moved to Benicia in 1945. She graduated from Benicia High in 1947 and in 1948 married Donald DeBenedetti. They settled in Vallejo and enjoyed 69 years of marriage until his passing in 2017.Louise is survived by her daughter, Janice (Miller) and son-in-law, Tim Miller; along with nephews, Robert DeWitt and Kent Oakley; and nieces, Diane Fred and Kathy Richens. Preceding her in death are her brother, Charles Oakley and twin sister, Lafern (DeWitt). Her daughter, Susan (Fling) passed in 1994.Louise worked as a hairdresser at Wiggins Funeral Home for over 40 years. She had been active in the Audubon and Bonsai society in Vallejo for many years, as well as the Y.L.I. and Eastern Star.Louise and Don had been avid travelers in earlier years, and Louise had written various articles for international travel publications. After vacationing to every state in the U.S., they began to journey abroad and traveled the globe to over 120 countries.The family will hold a private gathering during the holiday season.
W00159290-image-1.jpg

Published by Times Herald Online on Oct. 24, 2021.
To plant trees in memory, please visit the Sympathy Store.
MEMORIAL EVENTS
To offer your sympathy during this difficult time, you can now have memorial trees planted in a National Forest in memory of your loved one.
MAKE A DONATION
MEMORIES & CONDOLENCES
5 Entries
Janice I´m so sorry to hear this news. You were lucky to have had your Mom this long. We are never ready for this loss in our life. We lost Mom 11 years ago still can´t get over the hurt. I think of you often. I will keep you in my prayers
Linda Arnold Ayers
Other
November 19, 2021
We were so sorry to hear of Louises passing. Please accept our deepest condolences. She was a classy, lovely lady. All the staff at Advanced Instruments, Bonny, Mia and Anabel
Advanced Instruments Hearing Services
October 30, 2021
What a classy lady. My mother in law (Nadyne) and I worked with Don in the Pharmacy. I remember on my 21st birthday going to the Coronado club with Louise and girls from the Pharmacy. My condolences to her family
Elizabeth Lujan
October 24, 2021
With Deepest Sympathy for the loss of your loved one, Sister Louise. May she rest in peace, I will pray the Rosary for her. Blessings to her family at this time of sorrow. With Sisterly Love, Frani Dimond
Frani Dimond, Rec. Secretary Of Young Ladies Institute (YLI)
October 24, 2021
Just saw this I am sorry to hear of her loss. Many memories of her thru my life on H Street. Wonderful lady & family Rest In Peace Louise
Carol King
Friend
October 24, 2021
Showing 1 - 5 of 5 results