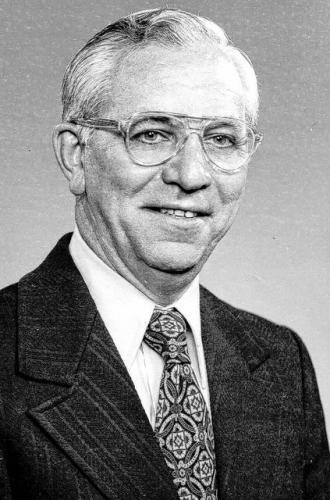 Born in Harrisburg, Feb. 6, 1926, he was a son of the late Samuel and Mary Capin. He earned a Bachelors of Science in accounting at Wilkes College, class of 1950, earned a Masters of Business Administration at Lehigh University and was conferred honorary Doctorate degrees at Misericordia University and at Wilkes University.

He served our country, in the U.S. Navy during World War II.

Robert's distinguished career at Wilkes University spanned almost 50 years. He was an adjunct professor, tenured professor in accounting, Dean of Evening and Summer College and Dean of Academic Affairs. He was best known as a remarkable teacher, mentor and advisor. He was the third President of Wilkes University; from 1974 through 1984. He holds the distinction of being the only Wilkes graduate to become President of the institution.

He served on numerous boards of directors for charitable and not for profit organizations including, Board of The National Institute of Health, Jewish Community Center, where he also served as executive director, The Hoyt Library, Osterhout Free Library, The United Way, Executive Director of Jewish Family Services, Ecumenical Enterprises, President Emeritus of Wilkes University, President of Congregation Ohav Zedek and many other organizations.

He had a passion for music and was a member of the JCC Klezmer band.

Robert continued his distinguished teaching career when he began a weekly current events class at the Jewish Community Center. He combined his gift of teaching, his interest in current events, camaraderie with his contemporaries, social interaction and intellectual stimulation. His classes became legendary and well attended for over 20 years.

He was preceded in death by his loving wife, the former Libby Smulovitz; and daughter, Deborah Buckler.

Funeral service will be noon today at the Dorothy Dickson Darte Center on the campus of Wilkes, corner of West River and South River Streets, Wilkes-Barre. Interment will be in Anshe Sfard Cemetery, Demunds. Shiva will be observed from 3 to 5 p.m. today at the Presidents Home at Wilkes University, 30 W. River St., Wilkes Barre. Friends may call from 11:30 a.m. until time of service.

Memorial contributions may be made to the Robert S. Capin Accounting Scholarship Fund; The Robert S Capin Honorary Chair of Accounting at Wilkes University; or a charity of choice.

To plant trees in memory, please visit our Sympathy Store.
Published by Times Leader from Jun. 22 to Jun. 23, 2015.
MEMORIAL EVENTS
No memorial events are currently scheduled.
To offer your sympathy during this difficult time, you can now have memorial trees planted in a National Forest in memory of your loved one.
Funeral services provided by:
Rosenberg Funeral Chapel - Wilkes Barre
MAKE A DONATION
Please consider a donation as requested by the family.
MEMORIES & CONDOLENCES
16 Entries
President Capin was a fine gentleman who was a pleasure to know. My thoughts and prayers are with his family.

We were so saddened to hear of your loss; please know our thoughts and prayers are with you at this most difficult time.

Bob, Marbee & Chris Sulitka
June 27, 2015
I was so sad to hear that Bobby has passed away. He was charming, handsome and so loving to our family. My father adored him like a son and was so proud of him. Now they are both gone and they will be forever missed. I wish you all a long life. Elise Koton Rushovich
Elise Rushovich
June 24, 2015
I am a student at Wilkes and I am honored to be attending. I am thankful that Robert Capin was such a caring intelligent leader. May he rest in peace.
Anna Robbins
June 23, 2015
Bob always had a smile and a glint in his eyes, especially when he was telling a story. Bob loved nothing more than to share his wisdom and love of music with the people around him. We may have only known Bob for a short time, but the memories we share and our love for his family will last far longer.
CC and Ed Connor
June 23, 2015
Dave and family,
I am very sorry to hear of the loss of your father. He was a very kind, down to earth person. He always made the time to talk with me when we crossed paths.

Marty and Nancy Kelly
C M Kelly
June 23, 2015
Your Dad & Grandfather was the most influential person during my undergraduate & graduate years at Wilkes. Thank you for sharing him with Wilkes and the community.
Bill Mainwaring 65&72
June 23, 2015
I was fortunate to be on the academic staff as an Assistant Professor of Aerospace Studies from 1978 to 1981. I remember Dr. Capin's gracious treatment of our ROTC academic staff and his intentional inclusion of us as regular faculty - even though we were temporarily assigned. My wife graduated in 1982 after I left so we are always tied to Wilkes and its family. Bob's contribution to the University can never be exaggerated. We extend our condolences to the Capin family for their loss.

LCol (Ret) Kenneth and Justine Johnson
Kenneth Johnson
June 23, 2015
Words cannot fill the emptiness you feel . Sorry for the loss of your dad . It was a great joy to me to help and get to know your dad . if only a short while in his time of need . " Blest are they who weep and mourn they shall be comforted "
Robert nurse and friend
June 23, 2015
Sorry to hear of your loss. We remember Dr. Capin when he was the director of the evening session at Wilkes. He was a mentor who taught me many things. To us he was also the president of the Synagogue and the father of the students we taught. Our sincerest condolences to all of you and may his memory serve as a blessing forever.
Rabbi Joseph and Mashe Katz (Baltimore, MD)
June 23, 2015
Your Dad and Grandfather was not only a brilliant teacher and administrator but he was also the kindest of men. My husband, of blessed memory, always felt honored to call him his friend. He will be missed by the entire community. My sincere and heartfelt condolences. Sincerely, Sue Strassman
Sue Strassman
June 22, 2015
Showing 1 - 16 of 16 results