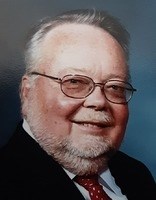 FUNERAL HOME
John Syka Funeral Home, Inc.
833 Kennedy Drive
Ambridge, PA
Earl William Stange
Economy Borough - Earl William Stange, 81, of Economy Borough, passed away on Monday, July 26, 2021 at UPMC Cranberry Place. He was born on May 3, 1940 in Economy Borough to the late William and Laura (Wood) Stange. Earl graduated from Ambridge High School in 1958 and was a graduate of the Garfield Business School and Robert Morris College. He served in the US Army for three years and was stationed at Fort Benning, Georgia. He had a 40-year career in human resources and retired from Ellwood City Forge in 2003. Earl was an active member of Our Lady of Peace Catholic Church, Conway where he was a former member of the finance committee and money counter. Earl enjoyed deer hunting and fishing. He enjoyed years of family beach vacations to the Outer Banks and Ocean City. He and his wife Janet had many great memories of square dancing with friends and relatives. He also enjoyed cruises and trips to the casinos. Preceding him in death in addition to his parents were his in-laws, Walter and Marcella Weil. He is survived by his wife of 55 years, Janet Weil Stange, daughters, Sharon Stange Prazenica and husband Patrick of Cranberry Twp. and Tracey Stange Kolo and her husband Joseph of Economy Borough, as well as his grandsons, Ryan and Evan Prazenica of Cranberry Twp. Earl's family would like to extend thanks to UPMC Cranberry Place and Good Samaritan Hospice for their compassionate care. Friends will be received on Friday from 2-4 and 6-8 PM in the John Syka Funeral Home, Inc. 833 Kennedy Drive, Ambridge. Family and friends will meet Saturday at Our Lady of Peace Catholic Church, Conway where a Mass of Christian Burial will be celebrated at 10 AM. Private interment will be in St. Cecelia Catholic Cemetery. In lieu of flowers memorial contributions are suggested to Our Lady of Peace Catholic Church and mailed to 725 Glenwood Ave., Ambridge, PA 15003 or to the Beaver County Humane Society, 3394 Brodhead Rd. Aliquippa, PA. 15001.