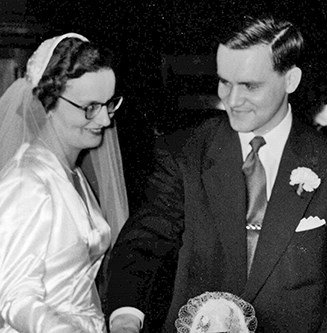 age 92, of Tuscarawas, OH passed away on March 10, 2021, at Smithville Western Care Center in Wooster, OH, following a period of declining health. Born August 23, 1928 in Detroit, MI to the late Lionel Ralph and Elen Mary (Johnson) Kollman. Dale graduated from Pontiac High School in Michigan June 1946. Dale received his B.S., M.S. and M.D. from the University of Michigan. While at the University of Michigan, Dale met Reba Hammond, and they married Feb. 3, 1952 in Lititz Moravian Church. They were great fans of the Michigan Wolverines! Dale completed his internship and residency at Akron General Hospital. After his residency, he joined the U. S. Navy and served his country 1958-1960 as an Assistant Attending Physician to the House of Representatives where he cared for members of congress, their families and their staff at the United States Capitol, Washington, D.C. He practiced in Maryland for seven years before moving to Tuscarawas, Ohio where he owned and operated Kollman Clinic, Inc., in Tuscarawas and Uhrichsville for many years. He became a charter member of the American Academy of Board Certified Family Practitioners. He was a member of Sharon Moravian Church, Lion's Club, AMA, AAFP, and OAFP. He greatly enjoyed woodworking. He also used his skills in Bethel, Alaska to help build a seminary structure. Dale and Reba spent many summers camping with their children and grandchildren. After retirement, Reba and Dale enjoyed extensive travel.

Graveside Services will be held at Sharon Moravian Church (Tuscarawas, Ohio) during the summer due to the Covid-19 pandemic concerns. Any Memorial Donations can be accepted at:

www.uhefh.com
Published by The Times Reporter on Mar. 20, 2021.
To plant trees in memory, please visit the Sympathy Store.
MEMORIAL EVENTS
To offer your sympathy during this difficult time, you can now have memorial trees planted in a National Forest in memory of your loved one.
Funeral services provided by:
Uhrich-Hostettler English Funeral Home Inc
MAKE A DONATION
MEMORIES & CONDOLENCES
Sponsored by Uhrich-Hostettler English Funeral Home Inc.
6 Entries
DR ROBIN-Kathy. Deepest Sympathy to your family! ❤
Debbie Corwin
Friend
March 23, 2021
Robin and family, so very sorry. I enjoyed working with Dale many years ago at Twin City.
Deborah Scott
March 21, 2021
Thank you for taking care of me and my babies. You and Ruby were a match made. I´m sure Grandma(Agnes) Paisley was there to greet you. May you Rest In Peace. Thank you for your services
Brenda and Richie Paisley
March 20, 2021
Thinking of all of you and your family. God Bless. Jim
JIM PICCHETTI
March 20, 2021
My condolences to the Kollman family. Dr. Dale was my Dr. for my pregnancy with my only child, Scott Allen Comignaghi, in 1971. He was a great Dr. with whom I had much faith. May his legacy live on & family find comfort in knowing he touched many lives, leaving many lasting memories over the years. God bless & RIP Dr.Dale......fly high!
Paula (Comignaghi) Wolfe
March 20, 2021
Rest in Peace my Friend. You will always Live on in my Heart. You treated me and my Grandparents. You saved my grandpas life J. E. Berkshire when he was haveing a Heart Attack. Again My Deepest Sympathy to your Family. REST IN PEACE.
Charles Billings
March 20, 2021
Showing 1 - 6 of 6 results