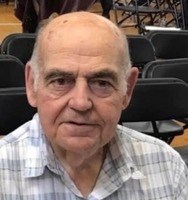 BORN
1936
DIED
2021
ABOUT
Little Falls High School
FUNERAL HOME
Vincent A Enea Funeral Service
527 E Albany St
Herkimer, NY
Frank J. Tamburrino 1936 - 2021
Dedicated Employee of General Electric
HERKIMER - Frank J. Tamburrino, 84, a long time Herkimer resident, passed away peacefully on Thursday, July 15, 2021 at Bassett Healthcare, Cooperstown, with his devoted family by his side.
He was born July 24, 1936, in Little Falls, the son of the late Patsy and Fannie (Malagisi) Tamburrino. Frank was a graduate of Little Falls High School, Class of 1955 and furthered his education at Mohawk Tech School and Utica College of Syracuse University.
His marriage to Mary F. Putch, took place on May 21, 1960, at the former St. Joseph's Church, Herkimer.
For over 36 years, Frank was employed at the former General Electric on French Road, Utica. He retired as an Engineer.
Frank was a member of the Church of Sts. Anthony & Joseph and the Knights of Columbus Little Falls Chapter.
Frank was a loving and caring husband, father and grandfather. His happiest times were when he was with his family. Frank enjoyed camping and family picnics and loved attending car shows with Mary, showcasing their 1977 Dodge Aspen. In his earlier years, he was a coach for the Herkimer Little League and was a cub scout and boy scout leader. He also was a referee for the Mohawk Valley Chapter of the New York State Association of Certified Football Officials. An avid NY Yankee and SU Basketball fan, Frank also enjoyed his Monday night GE golf league and Thursday night bowling league at Gorge View Lanes. Frank especially enjoyed his winter months spent with Mary at their winter home in New Smyrna Beach, FL.
Survivors include his loving wife of 61 years, Mary; three daughters, Patricia (George) Wagner, Linda Kudrewicz and Sharon (Ronald) Edwards; a son, Frank (Dawn) Tamburrino; nine grandchildren, Jennifer Wagner, Jessica Wagner, Peter (Adrienna) Kudrewicz, Kenny Joe Kudrewicz, Christine Kudrewicz, Alyssa Tamburrino, Frank Tamburrino, Jr., Brianna Parks and Brandan Parks; brother-in-law, James Putch; sister-in-law, Theresa Tamburrino; special friends, Joe and Ilene Swienton and Bill and Joan Hughes; and several nieces, nephews and cousins. He was predeceased by a brother, Philip Tamburrino; in-laws, James and Helen Putch; and a sister-in-law, Charlene Putch.
Funeral services will be held on Tuesday, July 20, 2021, at 9:00 a.m., at the Church of Sts. Anthony & Joseph, South Main St., Herkimer, where a Mass of Christian Burial will be celebrated by Rev. Mark Cunningham and assisted by Deacon James Bower. Burial will follow at St. Mary's Cemetery, Town of Herkimer. In keeping with Frank's wishes there are no public calling hours. Arrangements are under the caring guidance of the Vincent A. Enea Funeral Service, (next to NBT Bank), 527 E. Albany St., Herkimer, NY 315-866-1500. All memorial contributions may be made to the American Cancer Society, PO Box 22478, Oklahoma City, OK 73123, Sts. Anthony & Josephs Church, 228 S. Main St., Herkimer, NY 13350, or a charity of your choice.
The family would like to express a sincere heart felt thank you to Dr. Amy Grace and Dr. James Leonardo and Michele Sweet, RN, Rich Martucci, RN Clinical Coordinator and the staff in the special care unit of Bassett Health Care, Cooperstown.
Prayers and condolences may be sent to the family at www.vincenteneafuneralservice.com.

Published by Times Telegram from Jul. 17 to Jul. 19, 2021.
To plant trees in memory, please visit the Sympathy Store.
MEMORIAL EVENTS
Jul
20
Funeral service
9:00a.m.
Church of Sts. Anthony & Joseph
South Main St., Herkimer, NY
Funeral services provided by:
Vincent A Enea Funeral Service
MAKE A DONATION
Please consider a donation as requested by the family.
MEMORIES & CONDOLENCES
Sponsored by Vincent A Enea Funeral Service.
6 Entries
May God bless you and your family in this time of sorrow.
Lucy Noonan
Friend
July 23, 2021
We are very sorry about your loss. Frank was a wonderful person and he will be missed greatly. Your family is in our thoughts and prayers. With Sincere Sympathy, Charles, Rita, & Cynthia
Charles , Rita Francesco & family
Friend
July 20, 2021
Our thoughts and prayers are with you all at this time. The Mabbett´s - Dan, Denise, Daniel & David
Denise Wiliczka-Mabbett
July 19, 2021
Mary & family, we are so sorry for your loss. Our thoughts and prayers are with you at this time. God bless you all!
Joseph & Barbara Guiffre
Friend
July 19, 2021
Frank, I am sorry to learn of your passing. I know how much family meant to you and it was great to read that they supported you at the end. I will cherish the memories of the football games we worked together.
Chaz Zelows
Friend
July 19, 2021
So sorry about your loss of Frank. My sincere and heartfelt sympathy to you and your family. May he RIP
Jean O´Connell
Friend
July 17, 2021
Showing 1 - 6 of 6 results