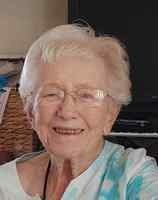 BORN
1924
DIED
2021
Gertrude J. Whittaker 1924 - 2021
ZEPHYRHILLS, FL - Gertrude J. Whittaker, age 97, passed away peacefully on Saturday, June 19, 2021 at home.
Born on February 24, 1924, in Camden, NJ, she was the daughter of the late John G. and Cecilia Gebhard Josberger. She grew up in Philadelphia, PA and was a 1943 graduate of Little Flower Catholic High School for Girls.
Gert married John (Jack) C. Whittaker, Sr., of Herkimer NY, on November 23, 1946. They lived in Herkimer and then Ilion, where they raised their family. Summers were spent at the family camp on Canadarago Lake. She worked in various jobs in the Mohawk Valley, including Univac. She was an avid bowler into her 90's and enjoyed numerous activities after retiring. She and Jack moved to Zephyrhills, FL, in 1981 as snowbirds and he passed away in 1983. She became a full time Floridian in 1996.
Preceeding her in death, beside her husband and parents, are her siblings, Anna M. Clark, Henry Williamson, Nora McCauley, Catherine Kowal, Philip Williamson and her birth parents, Henry and Nora T. Caulfield Williamson.
Surviving are her children, Carol Smith, San Antonio, FL, John Whittaker, Jr., Plymouth MA, Jean Ford, Zephyrhills FL, Ruth Pearson, Ilion and Robert Whittaker, Ilion; and grandchildren, nieces, nephews and cousins.
A Funeral Mass will be held at St. Joseph Catholic Church, Zephyrhills, FL, on Friday, July 30, 2021 at 11:00 a.m. The Mass will be livestreamed on the church's website. A Memorial Mass in Ilion will be scheduled for later this summer.
Memorial contributions may be made to the American Heart Association, American Diabetes Association or American Cancer Society.
Published by Times Telegram from Jul. 8 to Jul. 10, 2021.
To plant trees in memory, please visit the Sympathy Store.
MEMORIAL EVENTS
Jul
30
Funeral Mass
11:00a.m.
St. Joseph Catholic Church
Zephyrhills, NY
MAKE A DONATION
Please consider a donation as requested by the family.
MEMORIES & CONDOLENCES
4 Entries
Very sorry for your loss. She was an admired lady in the neighborhood. I wish her family happy memories of her life well lived.
Debbie Valentine Varlaro
August 7, 2021
May your memories of the wonderful times you shared with your loved one comfort you and your family, today and always.
American Heart Association
July 12, 2021
A blessed servant of the Lord, and devoted to her children. Choirs of angels rejoicing for her homecoming. Peace.
Steven See
Friend
July 9, 2021
My Condolences to the family. May she Rest in Peace.
Donna Hibbler
July 9, 2021
Showing 1 - 4 of 4 results