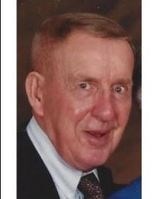 BORN
1932
DIED
2021
FUNERAL HOME
Enea Family Funeral Home - Herkimer
220 North Washington Street
Herkimer, NY
James G. Smith 1932 - 2021
EAST HERKIMER - Mr. James "Jim" G. Smith, age 89 and a longtime resident of East Herkimer, NY, passed away on Sunday morning, July 11, 2021, at Valley Health Services, Herkimer, where he received loving care.
He was born on June 18, 1932, in Herkimer, NY, a son of the late Arthur and Grace (Gordon) Smith. He received his education in Herkimer schools. On May 26, 1956, he was united in marriage to Congetta M. Natarelli, at St. Joseph's Church, Little Falls, a blessed union of over 65 years. He worked as an assistant engineer with the NYS DOT, Herkimer office, dedicating many years of service. He attended St. Francis de Sales Church.
His community service included being an active member of the East Herkimer Fire Department, the Herkimer Central School Board of Education and the Town of Herkimer Town Board.
Jim had a passion for the restoration of his "1950 Ford" as well as model airplanes and golfing. His family meant the world to him and they will continue to cherish many wonderful memories of boating, swimming and fishing on family vacations at Piseco Lake. He will be dearly missed.
He is survived by his beloved family: his wife, Connie; his son, James M. Smith, of East Herkimer; his daughter, Mariann Smith, of East Herkimer and California; his sister, Sheila Servadio, of Ilion; his brother, Bruce Smith, of Herkimer; his cherished grandchildren, Holden Smith, of East Herkimer and Tiffany Smith, of New Hampshire; a great-granddaughter, Everly; and several nieces, nephews and cousins. He also has survivor in-laws, John Natarelli (Barbara), of Cape Cod.
Jim was predeceased by his parents, Arthur and Grace; his brothers, Harry Smith and Wayne Smith; and his daughter-in-law, Marsha Mays Smith.
Funeral services will be held on Thursday, July 15, 2021, at 10:30 AM, at the Enea Family Funeral Home, 220 North Washington Street, Herkimer, NY and at 11:00 AM at St. Francis de Sales Church, 219 North Bellinger Street, Herkimer, where his Mass of Christian Burial will be celebrated. Interment will take place at St. Mary's Cemetery, Town of Herkimer. Relatives and friends are invited to attend calling hours at the funeral home on Thursday morning from 9:15 AM until 10:30 AM and attend the funeral services to follow.
The family would like to extend a very special thank you to the staff of Valley Health Services for the exceptional care and concern provided.
Funeral arrangements have been entrusted to the Enea Family Funeral Home, Herkimer, with Funeral Directors Harry J. Enea, Jr., Kevin E. Enea and Martin L. Ciaccia.
Online notes of sympathy may be left at www.eneafamily.com