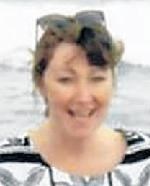 FUNERAL HOME
Babcock Funeral Home Inc
19 Pulver Ave
Ravena, NY
Lyons, Aleta D. GLENMONT Aleta D. Whitbeck Lyons, 71, passed away peacefully at home Saturday, September 4, 2021, with her loving family by her side. She was the daughter of the late Robert and Phoebe Whitbeck. She was born and raised in Ravena. Aleta was a 1968 graduate of R-C-S High School. Along with her sister, Dorothea, they owned and operated the Windflower florist shop in Glenmont and then Delmar for many years. Aleta volunteered at St. Thomas the Apostle School for many years before being hired as a kindergarten aide. She painted hundreds of rocks for the Delmar Rocks that were placed around Delmar for many people to enjoy. She was a lifelong active member of the Grace United Methodist Church in Ravena. Survivors include her loving husband, William Lyons; children, Arvid (Ally) Johnson, Oren (Debbie) Johnson, William Lyons Jr., Leah (David) Leonard, Renee Crimes, Shawn (Jenn) Lyons, Dalton Lyons and Shayla Lyons; sister, Phebe Archebald; 17 grandchildren; and many nieces and nephews. Aleta was predeceased by her brother, Robert Whitbeck Jr.; and sisters, Marilyn Anderson, M. Jacquelin Bleau and Dorothea Backlund. Funeral services will be held at 1:30 p.m. on Friday, September 10, in St. Thomas The Apostle Church, Delmar. Interment will be in Grove Cemetery, Coeymans. Friends may call at the church on Thursday, September 9, from 4 to 7 p.m. Contributions in memory of Aleta may be made to Aleta Lyons Scholarship Fund, St. Thomas The Apostle Church, 42 Adams Place, Delmar, NY, 12054.

Published by Albany Times Union on Sep. 8, 2021.
To plant trees in memory, please visit our Sympathy Store.
MEMORIAL EVENTS
Sep
9
Calling hours
4:00p.m. - 7:00p.m.
St. Thomas The Apostle Church
Delmar, NY
Sep
10
Funeral service
1:30p.m.
St. Thomas The Apostle Church
Delmar, NY
Funeral services provided by:
Babcock Funeral Home Inc
MAKE A DONATION
MEMORIES & CONDOLENCES
18 Entries
So sorry to hear about Aleta. May she rest in peace
Will Dunn
September 17, 2021
Bill and Family. I´m so sorry for the loss of Aleta. I grew up on the same street in ravena that she did. Even though we lost contact I´ve always remember her as kind and loving. May your memories and your love for her keep you strong through this tough time
Natalie turner
Friend
September 13, 2021
So sorry to hear about Aleta's death. She was a wonderful woman and a dedicated volunteer at St. Thomas the Apostle School.
Carol A. Tomlin
September 12, 2021
Our thoughts and prayers are with Aleta´s Family. She was adored by our family.
The Schubmehl´s
September 11, 2021
I'm sad that I didn't get to talk to her more, you know? But as mom would tell me, regret isn't something to ponder on all day. I hope she rests peacefully. If there is an afterlife, I hope she smiles down on our family... I'll be thinking of her a lot xx
Elijah Lyons
September 11, 2021
To Aleta´s family, I want to extend my sincere condolences on your loss. She always had a warm smile to share. May you continue to feel the warmth of her love for you from above. With sympathy, Einie Frangella Stine
Einie Frangella Stine
September 11, 2021
My deepest sympathy to all of Aleta's family. I have known Aleta and Bill and Aleta's sisters for many years. The world has lost a beautiful and loving soul. I am so very grateful to have had you in my life. God Bless and Rest in Peace dear friend.
Skye Brown
September 10, 2021
My thoughts are with the family at this time. I am sorry for all of your loss.
Billie Schinnerer
Other
September 10, 2021
To all of the Lyons family members, My very deepest condolences to everyone. I was blessed to know Aleta through Dalton knowing my daughter Courtney and I am grateful for a friendship that came from our children meeting. May she be your Angel now. Take comfort in your memories. Warmest Regards, Deena Restifo.
Deena Restifo
September 9, 2021
To the Lyons family: we are so sorry to hear of Aleta´s passing. She was a wonderful person. We always loved our talks and the amazing support she gave to anyone she came in contact with. You all are in our prayers.
Kelley & Frank Coons
September 9, 2021
Love and miss you very much grandma. Happy you are no longer in pain and so very grateful to have had you in our families lives
Gregory Salzer
Family
September 9, 2021
To The Lyons Family, Our deepest sympathy in the passing of Aleta. What a wonderful person! We will always remember all the laughs. Please remember to smile every day to honer her . Words can hardly express the way she touched our hearts. She will be greatly missed .
The Geraldsen Family
Family
September 9, 2021
I have been honored to have known such a wonder and kind lady Always with a smile A kind thought You will be missed but I know you will live on in every person you touched May you Rest In Peace
Carmela Zezze
Friend
September 8, 2021
My sincere condolences to Aleta´s family. Aleta and I were best of friends in elementary and junior high school. One of my fondest memories was when she won her pony, Mischief. Many times Aleta would take me with her to see Mischief in Coeymans Hollow. Aleta was so talented and she was a kind, gentle soul and a gracious lady.
Margaret VanSchaack Bowdy
School
September 8, 2021
Have many happy memories of Aleta and Bill in high school. My sincere condolences.
Wayne Fuhrman
September 8, 2021
Much love and many prayers for the repose of the soul of Aleta...she was loved by so many, and will be greatly missed.
the Engelbrides
School
September 8, 2021
Dear Lyons family, my sincere and heartfelt condolences for the passing of Aleta. Like so many others, Aleta touched my life with her warmth, attention to detail, and love for me and my young son at the St. Thomas aftercare program. I will always have a smile on my face when I glance at her desk in the St. Thomas lobby. Rest in God's love Aleta. -Marc
Marc Penesso
School
September 8, 2021
So sorry to hear about losing such a beautiful, caring and loving woman like Aleta at a young age. Our thoughts and prayers are with her entire Family. She will be tremendously missed by all who knew and loved her. May she Rest In Peace.
Nicholas Bassila
Family
September 8, 2021
Showing 1 - 18 of 18 results