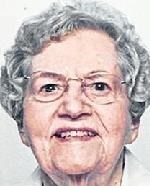 Wales, Caroline S. ALBANY Caroline S. Wales died peacefully on Sunday, September 9, 2018, at the Community Hospice Inn at St. Peter's Hospital in Albany. A native of Troy, she was the daughter of the late Rena Collins Wales. She graduated from Catholic Central High School, class of 1939. She was employed for 22 years by the Behr-Manning Co., now known as Norton Company. In 1962, Caroline entered the Sisters of Mercy, Albany, where she remained as a member until 1990. In 1968 Caroline obtained an associate in arts degree from Maria College, Albany and a bachelor of science degree in economics and bBusiness from The College of Saint Rose in 1972. From 1968 to 1972 Caroline was director of Public Relations at Maria College. In 1972 Caroline began the work of campus ministry for the Albany Diocese. She served in University Heights Campus Ministry which encompassed Albany College of Pharmacy, Albany Medical School of Nursing, Sage Junior College of Albany, Albany Business College, Albany Medical College and Albany Law School. In 1974, Caroline was awarded an Underwood Fellowship given by the Danforth Foundation, which enabled her to pursue three years of graduate study culminating in a master of divinity degree conferred by Yale University in 1978. Subsequent employment led her to a summer at the University of Texas Campus Religious Center and a year at the Ecumenical Center of Southwest State University in Marshall, Minn. Returning to Albany, Caroline instituted Media-Max Workshops, a course she designed as an independent study while at Yale. It was a program intended to empower persons in the work of social justice and service to educate the public about their activities. In 1982, Caroline became the first woman chaplain at Rensselaer Polytechnic Institute under the employment of the Rensselaer Newman Foundation. While at Rensselaer, Caroline served as an advisor to Alpha Phi Omega, Epsilon Chapter, a service fraternity. Caroline was inducted into Phalanx, a Rensselaer Honor Society for leadership and service to the campus community. While in campus ministry Caroline helped to inaugurate and served as co-editor of PROCESS, a journal published by the Catholic Campus Ministers Association. Over the years, Caroline served as director of volunteers at Guardian Angel School in Troy, as assistant secretary of the Albany Comitium of the Legion of Mary, on the Albany Diocese Commission on Peace and Justice, the Capital District Chapter of American Women in Radio and Television, Board of Trustees of Maria College and the Board of Trustees of St. Peter's Hospital. In 1970, she served as director of Publicity for Festival of Praise, a 500-voice ecumenical choir. The first performance at Saratoga Performing Arts Center drew an audience of 5,000 people. She participated in introducing the Table of the Lord, a televised Mass on Channel 10 TV followed by a 15 minute interview on various topics, primarily in the realm of social justice. Caroline was listed in the Two Thousand Women of Achievement 1970, Who's Who in the East and Who's Who Among American Women. Foreign travel brought her to England, Ireland, Scotland, France, Germany, Switzerland, Italy and Norway. Caroline was predeceased by her mother Rena Collins Wales; her brothers, Arthur Wales and his wife Anne Katharine, David Wales, and Michael C. Wales and his wife Corinne. She is survived by a first cousin Susan Bane of Needham, Mass. and a sister-in-law Gerlinde Wales of Parkville, Md.; five nephews, Michael A. (Grace) of Riverside, Conn. Dr. John (Peggy) of Mandeville, La., William (Annamari) of Fairfield, Conn., David (Linda) of Stamford, Conn., Michael (Courtney) of La Quinta, Calif., and five nieces, Kathrene Wales (Hugh Dismuke) of LaQuinta, Beth Wales (Bill Kelly) of Clifton Park, Linda Geiger (late Wendell) of Hoyt, Kan., Karen Wales of Point Pleasant, N.J., and Katharine Wales of Sausalito, Calif.; seven grandnephews and eight grandnieces. Also survived by dear friends Mary Agnes Zakens and Eleanor Guerin, RSM. Special thanks to the wonderful religious and other caregivers at Teresian House. A Mass of Christian Burial will be celebrated at the University Parish of Christ Sun of Justice, Chapel + Cultural Center, 2215 Burdett Ave., Troy on Thursday, September 13, at 11 a.m. Her body will be received into the Chapel at 9 a.m. on Thursday, followed by viewing hours until 10:45 a.m. The Rite of Committal and entombment will follow in the Community Mausoleum in St. Mary's Cemetery, Troy. In lieu of flowers, contributions may be made, in Caroline's name, to Teresian House, 200 Washington Ave. Ext., Albany, NY, 12203. Please visit parkerbrosmemorial.com to leave a message of sympathy and for driving directions.

To plant trees in memory, please visit our Sympathy Store.
Published by Albany Times Union on Sep. 12, 2018.
MEMORIAL EVENTS
No memorial events are currently scheduled.
To offer your sympathy during this difficult time, you can now have memorial trees planted in a National Forest in memory of your loved one.
Funeral services provided by:
Parker Bros. Memorial Funeral Home, Inc.
GUEST BOOK
3 Entries
Our friendship began when Caroline consented to be a senior pen-pal to the sixth graders I taught at St. Augustine School (She also lectored at St. Augustine Church). I am so sorry that I was unable to attend her funeral because of babysitting grandsons in CT. I just want to add to her accolades.
Kathleen O'Brien
September 15, 2018
My condolences to all my cousins, and to my mom. Caroline was always the "OTHER Caroline" to me. We were both named for her grandmother (my great grandmother). I am humbled reading about her dedication to service and social justice. She comes from a long strong line of dynamic intelligent women. I am grateful to have known her.
Caroline (Bane) Rufo
September 12, 2018
Offering our deepest sympathies during this time.
The Staff of Parker Bros. Memorial Funeral Home
September 12, 2018