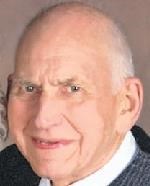 BORN
1932
DIED
2020
Gager, Donald D. SOUTH BETHLEHEM Donald D. Gager, 88, passed away suddenly at home on Sunday afternoon, November 22, 2020. Donald DeVere Gager was born in Scranton, Pa. on March 19, 1932, a son of the late DeVere and Mertie Benedict Gager. He was raised and educated in Scranton, and married the love of his life, the former Rita M. Ratchford. Don and Rita moved their family to South Bethlehem in 1968. He worked as a supervisor for Agway in Guilderland Center, retiring several years ago. In retirement, Don worked for the R-C-S School District, as a groundskeeper in St. Patrick's Cemetery in Coeymans, and as a funeral assistant at the former Caswell Funeral Home in Ravena. Don was a member and past commissioner of Selkirk Fire Company #3 in South Bethlehem, and a Fourth Degree member of Mother McAuley Council 3424 Knights of Columbus in Ravena. Don was a communicant of St. Patrick's Church in Ravena and served as a eucharistic minister and a bereavement minister. He also was a longtime member of Residents Encounter Christ (R.E.C.), a ministry to prisoners in Coxsackie Correctional Facility. Don was a man of humility, charity, and brotherly love. He extended to everyone his kindness and acceptance. While working at R-C-S, he regularly gave children the lunch money they forgot or did not have. He brought his faith with him wherever he went and is surely present in Heaven and reunited with the love of his life, his wife Rita. Don lived his life knowing that this world was only temporary and that his forever home is the Kingdom of Heaven. He will be missed beyond measure by his family. It is a great gift and honor to have had him as a father, grandfather, and great-grandfather. Don and Rita were married almost 70 years at the time of her passing in March of 2019, and he has missed her dearly every day since. Don is survived by their children, Diane Hoffman, Donna Hagen (Ken VanAlstyne), Sean Gager (Penny), Michael Gager, and Mary Tice (Robert); grandchildren, Robert Hagen (Christine), Michelle Hagen (Irwin Mitchum), Amanda Gager (Matt Mikulski), Sean Gager (Lauren), Sarah Roberts (James), Leah Gager, Christopher Tice (Erika), and Kathleen Carroll (Steven); great-grandchildren, Kali Hoffman (Zach), Jillian Hagen, Sara Stangle, Colin and Christian Mikulski, James and Henry Roberts, and Reed and Maeve Carroll and many nieces and nephews. In addition to his wife and parents, Don was predeceased by his siblings, Reed Gager (in World War II), Betty Yackamovitch, and Marion Schirg; and his granddaughter, Katie Gager. Due to COVID-19, all services for Don will be conducted privately for his immediate family. Burial will be beside Rita in St. Patrick's Cemetery. Memorial donations to St. Patrick's Church, 21 Main St., Ravena, NY, 12143 would be appreciated. Arrangements by A.J. Cunningham Funeral Home, Ravena. Condolence page at ajcunninghamfh.com.

To plant trees in memory, please visit our Sympathy Store.
Published by Albany Times Union from Nov. 25 to Nov. 26, 2020.
MEMORIAL EVENTS
No memorial events are currently scheduled.
To offer your sympathy during this difficult time, you can now have memorial trees planted in a National Forest in memory of your loved one.
Funeral services provided by:
A J Cunningham Funeral Home - Ravena
GUEST BOOK
12 Entries
We send our condolences to our Brother’s family.
Members of Right Reverend Msgr. Arthur J Reilly Knights of Columbus Assembly#1915
Friend
November 26, 2020
I will never forget Don and the many conversations and laughs we had at the local post office. My sincere condolences to the Gager family. What a wonderful man and such a pleasure to know. (Thank you for all those home baked cookies Don!)
Cindy Morrone
Friend
November 26, 2020
My heartfelt condolences to the Gager Family on the passing of your Dad. May it bring you some comfort knowing your Dad and Mom are reunited in Heaven. Rest peacefully, Don. ❤
Ann Seaburg
Friend
November 25, 2020
May God bless you and your family in this time of sorrow.
Nancy A Biscone
Friend
November 25, 2020
I will miss Don 10:00 daily we would meet at the post office and talk. He was a great man
Lisa Perry
Friend
November 25, 2020
Deepest sympathy and condolences to the entire family on Don’s passing. He was a true servant to very many, for a very long time, and there is no doubt that he is gone home to his eternal reward. I enjoyed many great conversations with Don, and he was clearly a pillar of the community and SFD Co.#3 who will be sorely missed. Holding you all in prayer for peace, comfort and strength in the wake of his passing.

Paul (& Niki) Miller
S. Bethlehem
Paul N. Miller
Friend
November 25, 2020
I am very thankful and honored to have known Mr. Gager for the amount of time that I have. Not only did I share conversations with Mr. Gager during my time as a student but they continued throughout time in Selkirk Company #3. Don is a great man and would give the shirt off his back for anyone in need. I pray Don is at peace and reunited with his wife Rita.
Ken Bovia
Friend
November 25, 2020
Gager family,

I am very thankful and honored to have known Mr. Gager for the amount of time that I have. Not only did I share conversations with Mr. Gager during my time as a student but they continued throughout time in Selkirk Company #3. Don is a great man and would give the shirt off his back for anyone in need. I pray Don is at peace and reunited with his wife Rita.

As president of the Selkirk Fire Company #3 we with heavy hearts send our condolences to the family. Don will be missed but he will not be forgotten. We are all honored to have known Don and been able to work with him, we thank him for his dedicated volunteer time.
Ken Bovia
Friend
November 25, 2020
My condolences to the gager family. Always like talking to Don when I seen him talked about the old days.
Charles Otten
Friend
November 25, 2020
May Don who lived an exemplary life in this world will be rewarded with a life blessed with grace and peace. May he rest in peace and rise in glory.
(Rev) Bernard R. Turner
Friend
November 25, 2020
My Sincere condolences go out to Don and his family. He shall be dearly missed. May all the beautiful memories sustain you during this difficult time. Don was such a wonderful and dear person who will be truly missed and may he R.I.P.
My sympathy is extended to his family, namely children, Diane Hoffman, Donna Hagen (Ken VanAlstyne), Sean Gager (Penny), Michael Gager, and Mary Tice (Robert); grandchildren, Robert Hagen (Christine), Michelle Hagen (Irwin Mitchum), Amanda Gager (Matt Mikulski), Sean Gager (Lauren), Sarah Roberts (James), Leah Gager, Christopher Tice (Erika), and Kathleen Carroll (Steven); great-grandchildren, Kali Hoffman (Zach), Jillian Hagen, Sara Stangle, Colin and Christian Mikulski, James and Henry Roberts, and Reed and Maeve Carroll and many nieces and nephews.

O God, whose mercies cannot be numbered: Accept our prayers on behalf of thy servant Donald Gager and grant him an entrance into the land of light and joy, in the fellowship of thy saints; through Jesus Christ thy Son our Lord, who liveth and reigneth with thee and the Holy Spirit, one God, now and for ever. Amen.

I am home in Heaven, dear ones;
Oh so happy and so bright!
There is perfect joy and beauty
In this everlasting light.
All the pain and grief is over,
Every restless tossing passed;
I am now at peace forever,
Safely home in Heaven at last.
Did you wonder I so calmly
Trod the valley of the shade?
Oh, but Jesus' love illumined
Every dark and fearful glade.
And He came Himself to meet me
In that way so hard to tread;
And with Jesus' arm to lean on,
Could I have one doubt or dread?
Then you must not grieve so sorely,
For I love you dearly still,
Try to look beyond earth's shadows,
Pray to trust our Father's will.
There is work still waiting for you,
So you must not idly stand;
Do it now, while life remains,
You shall rest in Jesus' land.
When that work is all completed,
He will gently call you Home;
Oh, the rapture of that meeting,
Oh, the joy to see you come !
Caroline Borger
Friend
November 25, 2020
To the Gager family sorry to hear of the passing of your Dad. I always enjoyed talking to Don whenever I would see him always pleasant . Keep him close to your heart and he will always be there.