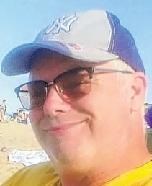 BORN
1962
DIED
2021
Roseberger, Douglas Robert RAVENA Douglas "Doug" Robert Roseberger went to be with the Lord on January 28, 2021, after complications of a heart attack; he was 58. He was born on May 5, 1962, to the late Shirley Gailey Roseberger and Robert Richard Roseberger in Troy. He was a devoted husband, loving father, uncle, and brother. He is survived by his wife of 24 years, Susan Rhodes Roseberger; and children, Hope and Nathan Roseberger and Rose Erno. He was the brother of Daniel (Marguerite) Roseberger, Richard (Janet) Roseberger, and Robert Roseberger; and was affectionately called "Uncle Muncle" by nieces and nephews, Jennifer (Donald) Feltman, Trayll (Diane) Roseberger, Elizabeth (Roscoe) Elsbury and Kristen Roseberger. He was also the uncle of David, Richard and Benjamin Roseberger, Lauren Fillow, Jennifer Evans, Brianna and Hannah Rhodes; and great-uncle of eleven nieces and nephews. Doug graduated salutatorian of the LaSalle Institute in Troy, class of 1980 and Siena College in Loudonville, class of 1984 with a B.S. in political science. Doug had a varied career history, but always in positions to help others: insurance sales with Combined Life, service coordination to individuals with disabilities at Rensselaer County ARC, and for the last five years assisting American veterans recovering from knee surgery as a medical service technician with Full Range Rehab in Cincinnati, Ohio. Doug volunteered for several years as a telephone counselor with True Friends Christian Helpline. Doug was an active member of his church, Grace Chapel of Ravena, serving on the board of directors for many years. Doug was an extraordinarily complex, introspective, yet gregarious man, quick with a witticism, handshake, or a hug. Respected by many for his thoughtful perspective, Christian faith and giving spirit, Doug will be dearly missed by a wide circle of family, friends, and acquaintances. Friends may call at the Congregational Christian Church, 175 Main St., Ravena on Thursday, February 4, from 1 to 2 p.m. A celebration service will follow at 2 p.m. Masks are required and social distancing will be observed. Contributions may be made in his memory to Capital City Rescue Mission, 259 S. Pearl St., Albany, NY, 12202 or Coeymans Hollow First Responders, P.O. Box 147, Coeymans Hollow, NY, 12046.