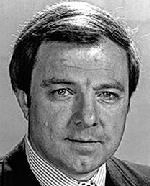 Dague, Ed LOUDONVILLE Ed Dague passed away peacefully and calmly on November 24, 2019, following a long battle with a degenerative arthritic condition. Ever inquisitive and the consummate journalist, wherever he is now he is undoubtedly still listening, learning and questioning - his three favorite pastimes. For over forty-years the people of the Capital District graciously welcomed Ed into their homes every evening to share the day's events, triumphs, tragedies, and controversies. In his one of a kind baritone timbre he greeted all of us at six and eleven most days. He relished his time as a journalist in the area and never took for granted what he considered his responsibility to his viewers to report fairly, honestly and without bias or favor. He did not know prejudice, did not rush to judgment and gave everyone a chance to tell their story. He believed deeply in the mission and necessity of the free press to inform the people, he considered the media to be the critical fourth branch of our government and in his later years was saddened by the open hostility directed at the press. Ed was vociferously inquisitive. What made him a great journalist, also made him a good person - his near constant desire to learn and connect no matter the circumstance. Whether interviewing a governor, a celebrity, or just chatting with a stranger on the street he was always genuinely interested to learn something new. In the process, he made his subject feel comfortable and special. Born in Buffalo to a violent and physically abusive father, Ed did perhaps the most challenging thing possible - he broke the cycle of domestic abuse that he was raised under and became everything his father was not. He raised two children and six grandkids with all of the love, compassion and kindness that his father did not show him. He approached fatherhood like he did everything in his life - intellectually, honestly and openly. He was fond of Kahlil Gibran's poem "On Children," which shaped his ideology on parenthood and life. He did not impose his beliefs, or legislate his advice - he merely listened and supported, knowing that the true value was in getting to the answer on your own. Ed graduated with a degree in electrical engineering from R.P.I. in 1968, but would proudly quip that he actually got his degree from the R.P.I. college radio station WRPI, where he built the station with a cadre of R.P.I. pals, hosted many programs and proudly served as the play by play voice for the R.P.I. Engineer hockey team ("Let's Go Red!"). Despite Ed's prominence in the area, he remained an intensely private man. He did not take advantage or relish the trappings of his local renown. To the contrary, he was far more comfortable at home reading about quantum physics, studying Roman history, programming computers, playing chess, making World War II model airplanes, enjoying a toke on his deck, or babying his beloved mini dachshunds. He would, however, gladly donate his time and reputation for the local charities that meant the most to him, including the Muscular Dystrophy Association, the Special Olympics, St. Jude and Farano Center Telethons, Christmas in July for Veterans and at his alma mater R.P.I. - where he proudly served in any capacity needed. Ed is survived by his wife of 51 years Donna; his two children, Rebecca (Thomas), and C. Harris (Stephanie); his six grandchildren, Josh, Tucker, Henry, Charlie, Farrah, and Max; his brother Larry (Mary); sister Judy Dommermuth (Dom); and his spoiled mini dachshund Katie. He was predeceased by his three beloved wiener dogs, Heidi, Catherine Clifton and Nathan - who he is no doubt playing with right now. The Dague family would like to express our eternal gratitude to all of the kind, generous and loving people at Peregrine Colonie and Samaritan Hospital who cared for and loved Ed in his final days. There are unsung angels among us and they go by the names of Amy, Tara, Stacy, Chuck, Keisha, Lakaya, Kim, Alison, Lisa, Jennifer, and many, many more. Without these good people our families' journey would not have been possible, and Ed would not have known as much love and comfort in his final days. Finally, the family would like to extend our sincerest and deepest gratitude to everyone in the local community who allowed our father and husband to be a part of your lives and who have reached out to us in the past days. Ed was a Capital District original - he loved and appreciated his viewers and would have been overwhelmed by the showing of love, support and all of the kind words and stories everyone has offered. We are sorry you had to sign off, dad. Safe travels you thoughtful, compassionate, gentle man; we are all better for having had you in our lives. Ed's express wishes before he passed were that he not be memorialized in a service. While he would have appreciated all of the kind words, he would have much preferred for people to spend time with their loved ones, read something interesting, take their dog for an extra-long walk, contemplate a new idea, or fairly consider the other side's position, in his memory. In honor of his wishes, the family will not hold a service. In lieu of flowers, the family requests donations be made to the Cure Congenital Muscular Dystrophy Ed Dague memorial fund - a charity which he cared deeply about in support of his grandson Charlie. Online visit curecmd.org or mail to 19401 South Vermont Ave., Suite J-100, Torrance, CA, 90502. To leave a condolence message for the family, please visit levinememorialchapel.com

To plant trees in memory, please visit our Sympathy Store.
Published by Albany Times Union from Nov. 28 to Dec. 1, 2019.
MEMORIAL EVENTS
No memorial events are currently scheduled.
To offer your sympathy during this difficult time, you can now have memorial trees planted in a National Forest in memory of your loved one.
Funeral services provided by:
Levine Memorial Chapel Inc
GUEST BOOK
19 Entries
As the months go by our family loss does not get any easier. Rebecca Harris and I will NEVER stop loving or missing you Ed. Donna Dague
Donna Dague
Spouse
September 30, 2020
God bless your immortal soul Ed. You were a wonderful, gentle man and friend. You made us all better by coming our way. Rest in peace and pure comfort. I loved you. Tim
Tim Hulbert
December 1, 2019
I also did not know EdTague personally but to this day I think that Ed and Chris Kapostasy (as she was known here)were the finest anchor team I have watched in this area. They were the rare combination of being bothn professional and personableness. And his kindness was always apparent to me. My sympathies to his family.
FE Abrams
December 1, 2019
As a life-long resident of the Capital District, I grew up watching Ed Dague dating back to his days at WRGB-Channel 6.

I was in high school when he moved to WNYT-Channel 13 in 1984, and continued to watch him right up to his retirement in 2003, He was a terrific anchorman and reporter, who knew how to ask a tough question without making the subject uncomfortable, and ALWAYS gave each side. of a topic their time to voice their views. He will definitely be greatly missed. RIP.
Ellen M. Hedderman
November 30, 2019
I starting watching Ed on the news when he first started as a co-anchor with Ernie. I followed him to Channel 13 until his retirement. My condolences go out to his family and close friends.
Sue Sleasman
November 29, 2019
So very sorry for your loss, Harris. I always enjoyed listening to your dad. Now I see what a stellar human being and father he was. Thinking of you and your family.
Susan Taylor
November 29, 2019
Always enjoyed having Ed reporting the news. I've missed him all these years. Rest in peace sir. My deepest sympathies to the Dague family. May sweet memories comfort you.
Maureen Gannon
November 29, 2019
Every night, for many years I welcomed Ed, at the helm of the Ch. 13 news team, into my home. He was kind, empathetic and trustworthy. My deepest condolences to his family, friends and colleagues. Ed was one in a million, the best of the best. Rest in Peace, Mr. Dague, a job well done!
Kate Sharron-Munger
November 28, 2019
I never met him, but I feel as if I know him from seeing him almost everyday on the TV in my living room. He was an old school reporter who delivered the news without rancor or bias. My condolences to his family.
Keith Barbagelott
November 28, 2019
ED WAS A GREAT GUY HE WILL BE DOING THE NEWS IN HEAVEN MAY HE REST AND PEACE AMEN
JUSTIN PANETTA
November 28, 2019
Donna, Rebecca, Harris, and Family: I am very sorry for your loss.
Mike McNulty
November 28, 2019
A very special gentleman has left this world to fly higher in the heavens. He was a broadcasting legend who will forever be remembered for his honesty and courage. May Ed now rest in peace. Jane M.
November 28, 2019
I did not know Ed personally but as a young man who grew up near channel 13 years ago I happen to be walking down to the corner store one summer day and recognizing him, I said hello. Well Ed started a friendly conversation and we talked for a few minutes. He chatted with me as if he knew me for 20 years although we never met. He asked about me, what I do for work, where I grew up etc. It was type of person Ed was, e treated everyone he came across with dignity, respect and interest. Even if you were just a young man walking down the street.
Mark Kelly
November 28, 2019
rest in peace,thanks for everything...
mark malek
November 28, 2019
The Capital District should consider itself lucky to have had Ed Dague at the helm all these years. Thank you Ed for your many years of service to the community. May you continue to listen, learn and question.
November 28, 2019
This is the most beautiful and thoughtfully written obituary I have ever read. A true testament to a great man. Thank you for sharing Ed with the rest of us for all those years. May he Rest in Peace.
Melanie Taber
November 28, 2019
AJ M
November 28, 2019
I did not know Ed but felt his presence. Having the Irish version of his name, while working in local government no one would talk to me when I called, this went on for years. They thought I was the reporter Ed Dague, no, I was Ed Day. Ed, Ernie, they are now on the staff of the big news guy upstairs. My childhood was similar to Ed's, I can appreciate what he went through & accomplished. "News at 6"
Edmond Day
November 28, 2019
RIP
madeline seel
November 28, 2019