Eugene A. Scott
Scott, Eugene A. DELMAR Eugene Arthur Scott died peacefully at St. Peter's Hospital in Albany on January 18, 2021, at the age of 85 following a number of health challenges. Born in Holland Patent, N.Y. to Arthur Irving and Eunice Mae (Shahan) Scott, Gene was raised in Remsen, N.Y. and graduated from Remsen Central High School, where his father served as principal. In 1963, he earned a bachelor's degree from Hamilton College with departmental honors in mathematics. A six-year intermission between the sophomore and junior years included service at the U.S. Army Intelligence School at Fort Holabird in Baltimore and the Counter Intelligence Corps at Fort Richardson, Anchorage, Alaska. In 1972, he received a Master of Science degree in educational psychology and statistics from the State University of New York at Albany. The next three decades were spent in biostatistics, research analysis, and information management with the New York State Department of Health and other agencies. A highlight was participating in the development of a data system for the evaluation of cardiac care outcomes. He and his wife Helen resided in Slingerlands for nearly 50 years before moving to Delmar. Gene enjoyed the final year of his life at Atria Delmar Place. A lifelong singer, Gene was a member of the Capitol Hill Choral Society (CHCS), the Masterworks Chorale at The College of Saint Rose, the Mendelssohn Club of Albany, the Burnt Hills Oratorio Society, Octavo Singers, and the Baldwin Alumni Reunion Choir at Hamilton College. High notes included singing with Eugene Ormandy and the Philadelphia Orchestra at the opening night of the Saratoga Performing Arts Center, performing in a Lake George Opera Company production of Puccini's Tosca, appearing with the Club at a choral festival held at the Mormon Tabernacle in Salt Lake City, and a trip to Ireland with Masterworks. For more than 35 years, Gene sang in the choir at the First United Methodist Church of Delmar under Danny Smith, Joseph Farrell and Kenneth Loiacono. Gene and Helen met through CHCS and continued their love of singing together in many of these groups. Gene's other interests included reading, tennis, New York Times crosswords, thoroughbred racing at Saratoga, community theater, poker and backgammon, and spending time in the Adirondacks. Gene was predeceased by his wife of 54 years, Helen Rae (Farrell) Scott. He is survived by his daughters, Susan M. Scott of Rockville, Md. and Jennifer L. Scott of Alexandria, Va.; his brother, Stanley A. Scott (Dora Hast) of Middletown, Conn.; brother-in-law Charles R. Farrell (Marjorie) of North Eastham, Mass.; and many loving nieces, nephews, cousins and friends. There will be no calling hours. Gene will be memorialized privately at a future date. applebeefuneralhome.com

To plant trees in memory, please visit our Sympathy Store.
Published by Albany Times Union on Jan. 24, 2021.
MEMORIAL EVENTS
No memorial events are currently scheduled.
To offer your sympathy during this difficult time, you can now have memorial trees planted in a National Forest in memory of your loved one.
Funeral services provided by:
Applebee Funeral Home
GUEST BOOK
8 Entries 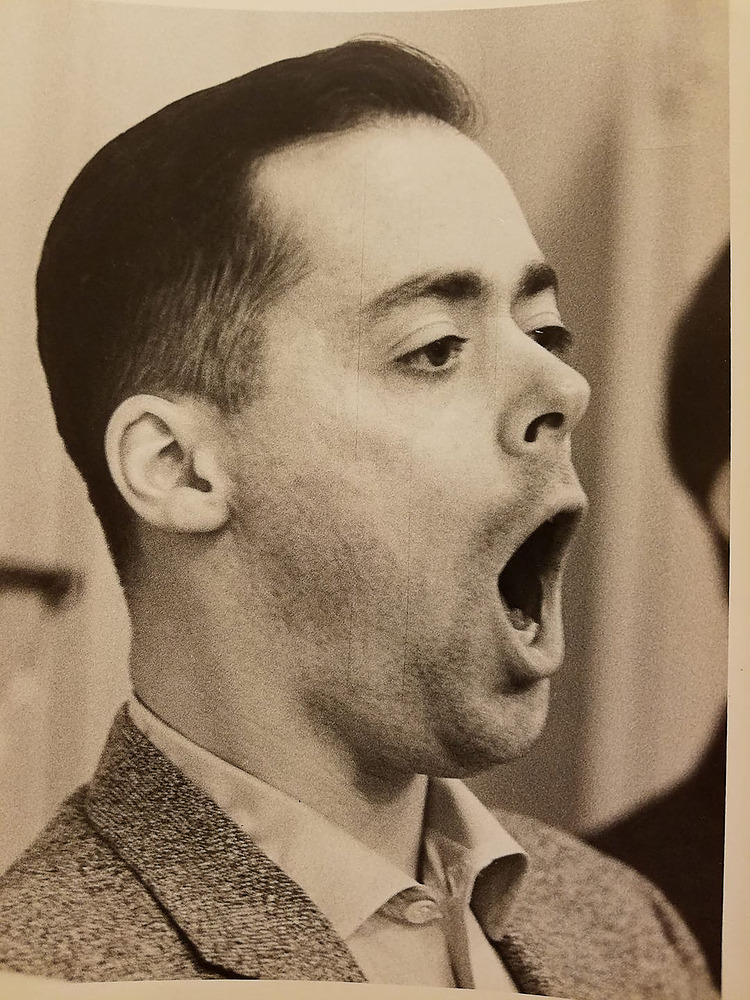 Just adding to our earlier post one of our favorite photos of Gene...a passionate and accomplished singer...
Michael Murphy and Peter Haley
January 30, 2021
I am so sorry to hear of Gene´s passing. I was fortunate to have known him, his amazing singing voice and wit, through the First United Methodist Church in Delmar and spending time with Jen and Sue. Kind and upbeat, he found the humor in pretty serious topics. I am thinking of, and send my deepest sympathy to, Sue, Jen and all of Gene´s family and friends. I hope that your memories of him provide some comfort during this difficult time.
Lisa Tomlinson
January 27, 2021
I sang with Helen and Gene for many years at the Methodist church and enjoyed them both very much. Helen and I sat next to each other in that choir and we had a lot of laughs over the years. Gene was a devoted husband helping Helen through some difficult times. They were dedicated to music and were both wonderful singers. I was honored to be invited to their lake house to help celebrate their 50th anniversary. They were proud and dedicated parents to Susan and Jennifer and always looked forward to their time with them. My sympathies to all their family and friends. Barb Wiley
Barbara Wiley
January 25, 2021
I was saddened to hear this news. Gene and Helen were my neighbors in Slingerlands, and we enjoyed singing in several choral groups together. Gene and I played poker together as well. He was always a witty, intelligent and fun colleague and friend. I am sorry for your loss.
Lindsay Hough
January 25, 2021
The heavenly choir gains another strong voice. In peace, sing for eternity, along with Helen.
Eugene Tobey
January 25, 2021
What an amazing life Gene had! We send our heartfelt condolences to family and friends. I was a joy to sing with Gene for decades in the Albany area. He sill be missed...
Peter Haley and Michael Murphy
January 24, 2021
To Gene's family: Please accept our heartfelt condolences for your loss. We met Gene and Helen through the Theadores and enjoyed many a fine holiday dinners together. I also enjoyed playing poker with Gene. He was extremely knowledgeable, fair, and fun. I enjoyed his stories of days playing poker while in the military in Alaska. I will always remember his welcoming nature, his high intelligence, and his wit.
Len and Patty Tollerton
January 24, 2021
We are so sorry for your loss.
Glenn and Cathleen Rathbun
January 24, 2021