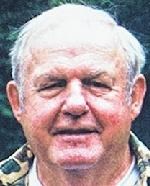 Millious, Floyd W. HANNACROIX Floyd W. "Mick" Millious, 88, died November 9, 2020, after a hard-fought battle with Parkinson's disease. Mick lived out his final days comfortably, with assistance from a group of dedicated aides, Debbie, Sandy, Kathy, Danielle, Irene, as well as Hospice. Mick's son David and his daughter Kathleen were at his side when he passed. He was steadfast and uncomplaining to the very end. Mick cherished his family - his late wife Barbara; his late son Floyd, known to all as "Buck"; son David and daughter-in-law Jennifer; and daughter Kathleen and husband Michael McNessor. He also cherished his time in the Adirondacks at his camp, hunting and fishing, with a motley crew of lifelong buddies in the Township 19 Derek Hunting Club. At that Adirondack cabin, beside a serene lake, Mick and Barbara would host annual reunions for friends and family - including the families of his sister Dorothy Andrus, his late sister Alice Austin, and his brothers, Donald and Ronald, who also predeceased him. Mick served in the Navy Seabees during the Korean War as a welder and steelworker. After being discharged in 1956, he worked as a welder and iron worker until joining Otis Elevator. At Otis, he put his skills to great use on projects like the numerous elevators installed at the Empire State Plaza, the ski jumps erected at Lake Placid for the 1980 Olympics, and many, many more. After 30 years on the job, Mick called it a career as a foreman with Otis in 1993, proudly working alongside his son, David. In retirement, Mick dusted off the 1940 Chevrolet coupe he'd owned for decades and turned it into a polished street machine. He and Barb showed it off at hot rod events around the Northeast and New England. Mick also spent as much time as possible in the Adirondacks, and made trips with Barb to Florida. Mick will be missed by all who knew him, worked with him, served alongside him and dearly loved him. He was what each of us hopes to be in our everyday lives: dedicated and hard working, yet strong and unwavering even in the toughest of times. The family will be conducting a private memorial service. In lieu of flowers, donations may be made to the Community Hospice, 47 Liberty St., Catskill, NY, 12414.

To plant trees in memory, please visit our Sympathy Store.
Published by Albany Times Union on Nov. 11, 2020.
MEMORIAL EVENTS
No memorial events are currently scheduled.
To offer your sympathy during this difficult time, you can now have memorial trees planted in a National Forest in memory of your loved one.
Funeral services provided by:
Babcock Funeral Home Inc
GUEST BOOK
4 Entries
We are so sorry for your loss..
The Zakens Family
Acquaintance
November 14, 2020
David and Kathy, Our thoughts and prayers are with you at this difficult time. You guys were great neighbors on Woodlawn Drive. With our deepest sympathy. The Merritt/Burrill Family
Jo Anne Burrill
Friend
November 12, 2020
May God bless you and your family in this time of sorrow.
Dave and Lisa Andrasy
Friend
November 11, 2020
Fair Winds and Following Seas to a Brother Seabee . Condolences for the Family
J Evans
Served In Military Together
November 11, 2020