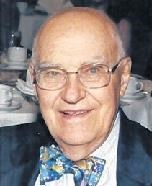 FUNERAL HOME
Bryce Funeral Home Inc. - Troy
276 Pawling Avenue
Troy, NY
Taylor, Harry G. TROY Harry G. Taylor, 94, of Beechwood Apartments, Troy, died Saturday, June 30, 2018, at Eddy Heritage House Nursing Center after a brief illness. Born in Albany, he was son of the late Harry G. Taylor and Anna McDonald Taylor and husband for 65 years of the late Virginia A. Allen Taylor. He was raised in New Scotland and resided in Troy, Poestenkill, Defreestville for 28 years and Colonie for 12 years. He moved to Beechwood Apartments in 2013, and was a graduate of Albany Academy, class of 1941, Troy Business College and earned his bachelor's degree from Russell Sage College. Harry was employed at the New York State Division of Alcoholism and Alcohol Abuse for 30 years retiring in 1983. He was formerly an insurance agent for the Metropolitan Life Insurance Company for 10 years. He was an active volunteer in many area organizations. He was a member of the Pawling Avenue United Methodist Church where he served as trustee, financial secretary and many other capacities, a member of the Capital District Genealogical Society, the Dutch Settlers Society of Albany, the National Society of the Sons of the Revolution, the Rensselaer County Historical Society and a trustee of the Troy Cemetery Association 'Oakwood'. Harry was a well known local genealogist. He was an Army veteran of World War II serving in the Pacific Theatre. Survivors include his niece, Cynthia Abele; and nephews, James and Andrew Taylor and Donald and Frederick Slingerland. He was predeceased by his brother, William David Taylor; and half-brother, Donald McDonald Slingerland. Relatives and friends may call at the Pawling Avenue United Methodist Church 520 Pawling Ave., Troy on Saturday, July 14, from 10-11 a.m. followed by a memorial service at 11 a.m. with Reverend Karyl Hopp, Pastor, officiating. Interment will be in Oakwood Cemetery, Troy. In lieu of flowers, contributions may be made in memory of Harry G. Taylor to the Pawling Avenue United Methodist Church, 520 Pawling Ave., Troy, NY, 12180. To sign the guestbook, light a candle or for service directions, visit brycefh.com.