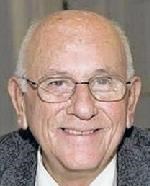 LaVoie, Homer P. SCHODACK Homer P. LaVoie, 90 of Schodack, passed away at home on April 14, 2021. Homer, a beloved husband and father who always gave of himself through his love, laughter and unwavering support; was "Born in a Boat House" - the name of his recently published book about growing up in Tupper Lake and the Adirondacks. Throughout his life, Homer was an avid golfer, and also enjoyed many other activities, including bowling, vegetable gardening, making jelly with the concord grapes he grew in his yard and maple syrup from his own trees. He definitely had a green thumb. He was an entrepreneur - owning and operating Les Jeans clothing store for 10 years - and invented various useful household products. Homer spent a number of years in the credit union and banking industry, during which time he chartered a new credit union in the early 1980s. He was well-known in the community, served on the Town of Schodack Planning Board for nine years, and was a member of the Elks Club. Homer came from humble beginnings, where he grew up on the edge of Racquette Pond with his sister and two brothers, losing his own father as a child. Homer attended Tupper Lake High School where he played hockey and ran track and was always working throughout his young life. He loved being in the mountains with his family and was proud of his home town. After high school, he joined the Navy, serving during the Korean War as a cook on the U.S.S. Great Sitkin. He later moved to Albany and attended Albany Business College. After meeting his beautiful bride, Barbara, at the V.A. Hospital, he spent most of his life in the Town of Schodack. When relaxing, Homer liked trips to the casino, playing cards with family, and enjoying a cold Guinness. Most importantly, and dearest to his heart was spending time with his children, grandchildren, great-grandchildren, and the love of his life, his wife Barbara. Along with his love Barbara Ann (Mantica) LaVoie, he is survived by his children, Yvonne Coiteux, Renee (Jim) Bult, Lorraine (Michael McNamara) LaVoie, AnnMarie (Keith) Zimmermann, John (Janet) LaVoie, and Lynn (Christopher) Stephens; eighteen beautiful grandchildren, and six great-grandchildren, in addition to numerous nieces and nephews. The family would like to extend special thanks to Dr. Keith Rebehn, and Grace Sweet, R.N., of Community Hospice, and the entire hospice team. Relatives and friends are invited to call at the Thomas P. Mooney Funeral Home, 11 Elm St., Nassau on Monday from 4-7 p.m. Funeral services will be private due to COVID-19 capacity restrictions. In lieu of flowers, contributions may be made to the American Heart Association. Online condolences may be offered at Mooneyfuneralhome.com

To plant trees in memory, please visit our Sympathy Store.
Published by Albany Times Union from Apr. 17 to Apr. 18, 2021.
MEMORIAL EVENTS
Apr
19
Calling hours
4:00p.m. - 7:00p.m.
Thomas P. Mooney Funeral Home
11 Elm St., Nassau, New York
Funeral services provided by:
Thomas P. Mooney Funeral Home
MAKE A DONATION
Please consider a donation as requested by the family.
GUEST BOOK
5 Entries
Renee and family, I am so sorry for the loss of your dad. My thoughts and prayers are with you at this sad time. Sincerely Eileen Bucci
Eileen Bucci
April 19, 2021
To the LaVoie family, So sorry for your loss. Homer was a great man. Pleasure to work for him at Rensco for many years. Rest in peace
Annette Bissell
April 18, 2021
Barbara I am so sorry to hear of Homer's passing. Reading his obituary, I know why he was so nice and friendly whenever I saw you two mostly at Mass at St Mary's. I wish I had known Homer grew up on Tupper Lake. I'm sorry I cannot come to his wake. With Heartfelt Sympathy and God's Blessings Charleen
Charleen Papa
April 18, 2021
So sorry for your loss. Our thoughts and prayers are with you all. Uncle Homer wrote a beautiful book which brought back memories of stories my father used to tell me of their life growing up in a boathouse in Tupper Lake!
David LaVoie jr. and Family
April 17, 2021
Barbara, Im so sorry for your lose. I remember your store and missed it when it was gone, im so sorry for your loss.
SUE HOFFMAN
April 17, 2021