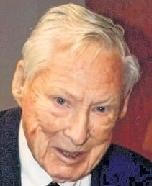 Burns, James Robert LOUDONVILLE James Robert Burns, 91, of Loudonville, beloved husband of Jean Greenshields Burns, passed away suddenly after a brief illness on Tuesday, January 15, 2019. He was born on September 3, 1927, in Castleton-on-Hudson, the son of the late James P. Burns and Beatrice Brown Burns. At age 17 with his mother's permission, Jim joined the U.S. Navy during World War II and served in the Atlantic Theater of Operation on the USS Tarazed (AF-13). After he was honorably discharged, Jim returned to Van Rensselaer High School. It was there he met his high school sweetheart, Jean, and graduated with the class of 1948. Following high school, Jim briefly attended Siena College when the opportunity arose to begin his career path with the Niagara-Mohawk Power Company that lasted 45 years. He worked hard, accepted opportunities for advancement, loved the company and attained the position of chief of the service dispatch office where he was unofficially known as "Mr. Ni-Mo" for his successful contacts with the public. Patriotism was a part of Jim's character, nurtured by his active participation in the Boy Scouts of America. At 19 he became a Scoutmaster. He was chosen for the special honor of chaperoning local scouts by train to the first West Coast National "Jamboree of '53" on Irvine Ranch in California. He remained active in scouting for decades after. On June 10, 1955, Jim married his wife of 63 years. At Loudonville Community Church Jim's spiritual side was nourished. He continued to work with youth and especially enjoyed providing them with exciting outdoor experiences such as hiking in the Adirondacks, canoeing the Battenkill and "Freeze Outs" at Camp Pinnacle in the Helderbergs. Jim served the church in many ways: Sunday School teacher, Finance Board Chairman, Boys' Brigade leader, church usher. Jim also served as an original board member of the W.C. Little Memorial Park Association until his passing, and contributed time as a board chairman. He was a member of the Albany Chapter of the Adirondack Mountain Club for over 60 years and also served as chairman. He loved climbing in the High Peaks region during the winter and was considered an expert in winter survival. Jim was district commissioner of the Albany area for the Clan Campbell Society (N.A.) and was proud to be a member of the St. Andrew's Society of the City of Albany where he made many long-lasting and cherished friendships. Jim loved sailing on Lake George and was a former member of the Lake George Club for 20 years. Other interests included reading about history, memberships in local historical societies, and traveling, especially in Scotland. Jim is survived by his wife, Jean; son and daughter-in-law, Andrew and Carrie Burns of Brighton, Colo.; adored grandsons, Deaven Burns and Gavin Burns; nephews, John Burns and Thomas (Kim) Burns; special cousins, Joan Gochee, Robert (Kitty) Murphy, Maureen Topping, Carol Gorham; and many other cousins. He was predeceased by his brother, John Joseph Burns. A calling hour will be held on Saturday, January 26, at Loudonville Community Church, 374 Loudon Road from 2-3 p.m. with a celebration of Jim's life and worship service beginning at 3 p.m. He will be laid to rest in Albany Rural Cemetery. In lieu of flowers, contributions can be made to the Capital City Rescue Mission, 259 S Pearl St., Albany, NY 12202 or Camp Pinnacle, 621 Pinnacle Rd., Voorheesville, NY 12186. Please express on-line condolences by visiting morrisstebbinsminersanvidgefuneralhome.com

To plant trees in memory, please visit our Sympathy Store.
Published by Albany Times Union on Jan. 20, 2019.
MEMORIAL EVENTS
No memorial events are currently scheduled.
To offer your sympathy during this difficult time, you can now have memorial trees planted in a National Forest in memory of your loved one.
Funeral services provided by:
Morris-Stebbins-Miner & Sanvidge Funeral Home
GUEST BOOK
4 Entries
We all will miss you Jim.
Debbi Heritage
January 21, 2019
So Glad I was able to know you Mr Burns. Loved to hear all your stories , and help you and your wife. You always made sure to feed me lunch every time I was there to clean your home. I will miss you very much. Thank you for your strong faith. You are home now in the loving arms of our Lord. You made a positive mark on this earth.
Deborah Fish
January 21, 2019
Jean and family,
Our thoughts are with at this time
James was a gentleman,friend and a great example of how to live one's life