FUNERAL HOME
McVeigh Funeral Home
208 North Allen Street
Albany, NY
Flint, John F. MENANDS On December 31, 2015, Our Lord called his good and faithful son, John F. Flint back to His Heavenly Kingdom to rejoin his loving wife, Mary Jane. Born on August 28, 1927, in North Albany to Josephine Fleming Flint and George Flint, John attended St. Joseph's High School and Cathedral Academy. Upon graduation, John enlisted in the United States Army and was stationed in Korea. Upon his honorable discharge, John started working at Niagara Mohawk Power Company reading meters. He retired from Niagara Mohawk over 40 years later as a member of the Right of Way Department. John was an accomplished center fielder and played several seasons in the Albany Twilight League. He was invited twice to try out for the Philadelphia Athletics. John declined both invitations, deciding instead to focus on his greatest priority, his family. John was a lifelong communicant of Sacred Heart Church in North Albany, which is where he met the love of his life, Mary Jane Paliotta. John and Mary Jane were married on August 18, 1951, and were inseparable for 55 years, until Mary Jane's passing in 2005. John and Mary Jane had seven children, Maureen Connors (Gene); Michael Flint (Lois, deceased, and Joanne); John Flint (Donna); Brian Flint (Jude); Christopher Flint; Paul Flint (Patricia); and Mary Beth Davis (Peter). They were proud grandparents to Sean Traeger, Amanda Traeger, Sean Connors, Heather Wasak, Tara Hollins, Kathleen Gargalione, Genevieve Flint, Teagan Flint, Michaela Flint, Victoria Flint, Tyler Flint, Lacey Flint, Mackenzie Flint, Devon Flint, Grace Flint, Michael Flint, Haley Flint, John Flint, Alyson Flint, Andrew Flint and Aidan Flint; and several great-grandchildren, nieces and nephews. John derived his greatest joy from spending time with his family. He enjoyed summer vacations in Cape Cod, deep-sea fishing, apple picking, drives to Vermont, trips to Storytown with the Puleos, taking walks, playing golf and watching Red Sox and New York Giants games with his sons, and anything that involved family time. John was an exemplary father, grandfather, great-grandfather, brother, uncle and friend. He possessed a kind, loving and generous spirit. He will be missed by all. John is survived by a sister, Margaret "Peg" Cote; and brother, Francis "Bud" Flint. He was predeceased by an infant daughter, Mary Jane; sister, Josephine Kukuk; and brothers, George and Ted Flint. John's family wish to thank the administration and staff at Loudonville Adult Home and The Eddy Village Green for the care, kindness and support they provided as John's health declined. A Mass of Christian Burial will be held at Sacred Heart Church in North Albany on Monday, January 4, 2016, at 9 a.m. Friends and family are invited to call from 3 to 6 p.m. on Sunday, January 3, 2016, at McVeigh Funeral Home, 208 North Allen St., Albany, NY 12206. To leave a message for the family, obtain directions, light a candle or view other helpful services please visit McveighFuneralHome.com

I have the privilege of sharing my life with you from my teenage years through my adult life. We shared so many great times together enabled by the love of your Mom & Dad. Their Christian lives were a shining example to all of us in their dedication to faith, family, and their fellow man. Your Mom & Dad are now both together in the loving embrace of God's hand.
Ed Patterson
January 11, 2016 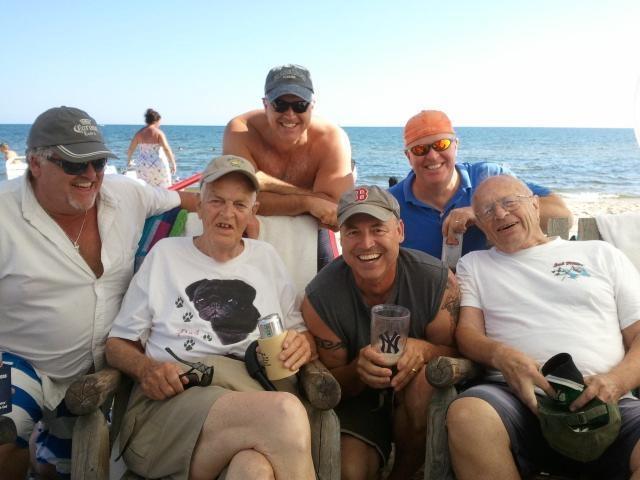 January 6, 2016
Dear Flint Family,
Sorry to hear of the recent passing of your father, John, a fine gentleman who has left this earth to join your mom at rest and at peace. Both were very special people;I hope you are soon comforted.
Donna Anthus
January 6, 2016
Dear Peggy and Bud, I was very saddened to hear about John's passing.John was a few years older than me, but I will always remember him for the fine gentleman that he was. We lived backyard to backyard on Albany St. It seemed we could never go in our backyard without saying hello to someone in the Flint family. I can't think of a nicer family that I knew of than the Flints. God Bless you all,Harold (Sonny) Drossos.
Harold (Sonny) Drossos
January 5, 2016
Sorry for your loss.... Lynn & Dave Klefbeck
January 5, 2016
Deepest sympathies for your loss

The Officers and Staff IBEW Local 97
IBEW Local 97
January 5, 2016
Mary Beth and Family,
We are very sorry to hear of your loss. Our thoughts and prayers are with all of you.

Kevin and I are sending thoughts and prayers your way. I will always remember your parents from Sacred Heart Church. Their presence always demonstrated their love of their family and their community. May he rest in peace.
Maryann Carey-Ryan
January 2, 2016
I am so sorry to read about the passing of Mr. Flint. My thoughts go out to the entire family, including John, Haley, and Michael.

I'm sorry to read about the passing of your brother John. I will keep him in my prayers. May he rest in peace.

Sandy Brousseau Colorado Springs, Co.
January 2, 2016
May the love of friends and family carry you through your grief.
John Maloney
January 1, 2016
The Feisthamel and Gardner families send their deepest condolences. May he rest in peace...
Gardner family
January 1, 2016
I recall Mr Flint as a dedicated family man and I am sorry to learn of his passing. His family is in my thoughts
Eileen Davis
January 1, 2016
So sorry to hear of johns passing.What a great guy......RI P John ....Lynne and Sam Barr. Englewood Florida
January 1, 2016
Thoughts, prayers and love to the entire Flint family. May he rest in eternal peace with his beloved Mary Jane.
Sheri Habbinger
January 1, 2016
John has been always the gentleman and an outstanding positive example and his life has always been one of complete dedication. We will all miss him.
Father Peter Young
father young
January 1, 2016
To Chris, Haley and family: Very sorry for your loss. Is sounds like he had an interesting and fruitful life! Our thoughts are with you at this difficult time.
The Pratt family
David Pratt
January 1, 2016
Peggy, Bud and the Flint family
Just a note to express our sympathy on the passing of John. I remember him as a really nice gentlemen. Last met him a few years ago at Menands Diner and having a nice chat.
Ray and MaryRose O'Neill
January 1, 2016
Flint Family: Sorry to hear about Johns Passing. It was always enjoyable working with him in the Service Dept in North Albany in the early 70's. Two big guys like us stuffed in a Dodge D100 service truck was quite a site coming down the street. Remember John and Kids coming out to Kinderhook to cut down a fresh xmas tree. Little did I know that I would be living nearby on Hutton St a few years. Paul Leinbohm Daytona Beach Fla
Paul Leinbohm
January 1, 2016
TO THE FLINT FAMILY, SO SORRY TO HEAR ABOUT JOHN'S PASSING HE WAS A GREAT MAN, OUR PRAYERS & THOUGHTS ARE WITH YOU,MAY HE REAST IN PEACE
JERRY & JACKIE TREACY
January 1, 2016
To John Flint and family: So sorry to read about the passing of your father in this morning's paper--his legacy lives on in his terrific family. May God keep you strong at this difficult time.
From your old Catholic High Journalism Teacher
Jim Spain
January 1, 2016
Showing 1 - 28 of 28 results