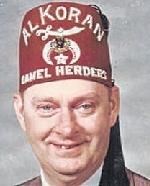 BORN
January 13, 1925
DIED
February 5, 2021
Williams, Leroy P. SELKIRK Leroy P. Williams, formerly of Scranton, died February 5, 2021, in Albany, N.Y. Born January 13, 1925, he was the son of the late G. and Madeline Botke Williams. He was a 1943 graduate of Scranton Technical High School and a 1950 graduate of Wharton School. He proudly served his country in the United States Army where he anticipated in five major battles in the European Theater. Leroy started working for the railroad in 1961 in Scranton and then on to Cleveland. He moved to Selkirk in 1976. He was a member of the Delmar Reformed Church. A memorial service will be held at a later date at the church. He was a member of the United Church of Christ in Scranton and was the secretary of Men of Trinity for ten years, as well as a member of their bowling league and later the Erie Lackawanna bowling league. He was a life member of the Theodore J. Wint V.F.W. Post 25 where he was the chaplain and the public relations officer in the 1950's. He went through all of the offices and was up for commander before moving to Cleveland, Ohio with the Erie-Lackawanna Railroad. Leroy was also a 42 year member of the American Legion Post 948. He was a member of the Co-Ed Council of the Y.M.C.A. that held weekly dances in which he was the disc jockey. In July of 1961 he moved to Cleveland, where he joined the John W. Barley Lodge 621 F&AM ancient accepted Scottish Rite Valley of Cleveland and AL Koran Shriners. In 1978 he was elected Grand Systems president of the Erie Lackawanna Railroad in Hudson, Ohio. In 2002 he became Chief of the Cyprus Arab Patrol. Leroy was also a member of the Transportation Communications International Union and the retired Veterans Railway Employees Inc. Surviving are two stepsons: Ronald Scott and Gary Scott; and his wife Helen, all of Scranton; step-grandchildren Jennifer and Gary Scott, Jr.; and several cousins. A graveside service will be held on Monday, March 9, at 11 a.m. in the Abington Hills Cemetery with full military honors. Contributions in memory of Leroy may be made to the Shriners Hospital for Children, 516 Carew St., Springfield, MA. 01104

To plant trees in memory, please visit our Sympathy Store.
Published by Albany Times Union on Mar. 7, 2021.
MEMORIAL EVENTS
Mar
9
Graveside service
11:00a.m.
Abington Hills Cemetery
Funeral services provided by:
Meyers Funeral Home, Ltd.
MAKE A DONATION
Please consider a donation as requested by the family.
GUEST BOOK
2 Entries
In memory of my godfather, he was such a funny man. Although I have not seen him in awhile he was a great man. The life of the party no matter where he was even at funerals. Always appreciated the little notes and lottery tickets he sent. Love u. Sue Bommarito
Sue Bommarito
April 10, 2021
Good ole Leroy. Loved your jokes you told my Dad (selkirk) and my Mom Tony
tone
March 18, 2021