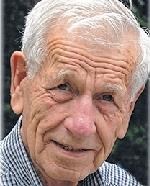 Ismay, Louis Fletcher ALBANY Louis Fletcher Ismay, an educator, lifelong advocate for social justice, champion of environmental causes and one of the oldest grassroots activists in New York's Capital Region died October 12, 2021, at St. Peter's Hospital in Albany. He was 96. A pioneer in the conservation movement, Louis Ismay influenced generations of students as a professor in S.U.N.Y. Albany's Environmental Studies department and coordinator of its Environmental Forum in the early 1970s. Born in Bronxville, N.Y. on February 25, 1925, Louis and his younger brother Arthur were raised in Tuckahoe, N.Y. Their parents, Louis and Julia (Keringer) Ismay immigrated to the United States from Austria-Hungary in the early 1900s. In 1943, Louis was drafted and served as an Army engineer, seeing combat in Western Europe. He was reactivated for duty in the early 1950s and left service as a sergeant first class in 1956. Two years later Louis graduated from the Teacher's College at Columbia University with a master of arts degree in Philosophy and Social Science. A 1949 marriage to Elizabeth Kroll of Cortland, N.Y. ended in divorce in 1957. In 1959 Louis married Eleanor Ricker of Guilderland, divorcing in 1972. In the 1970s, Louis and his Environmental Forum students played an instrumental role in saving Albany's Pine Bush wilderness area from commercial development. Following a career in academia and home energy services, Lou retired on a farm in Berne, moving to an assisted living facility in recent years due to his declining health. Louis was a longstanding member and former president of the Interfaith Alliance, a multi-faith organization dedicated to protecting the integrity of religion and democracy. In accepting a 2019 lifetime honor from the New York Office for the Aging, Louis said "You have to work for justice or you will never know peace. Get involved, pay attention, do something useful every day." Louis is survived by his brother Arthur P. Ismay of McLean, Va.; and by his son John Fletcher Ismay of St. Augustine, Fla.; as well as five grandchildren, David Edwards, Daniel Ismay, Debra (Ismay) Sherman, Kacey Ismay and Kelly Ismay, and five great-grandchildren. Louis will be buried with military honors at the Gerald B.H. Solomon Saratoga National Cemetery in Schuylerville, New York in Saratoga County on November 12 at 10 a.m. All are welcome to join the graveside service as well as a memorial service and celebration of life at the First Unitarian Universalist Society of Albany at 405 Washington Avenue in Albany, N.Y. at 12 p.m. on November 12. In lieu of flowers, Louis' family asks that you consider a donation of time or money to the Albany chapter of Veterans For Peace and to the Save the Pine Bush organization.

Published by Albany Times Union on Nov. 7, 2021.
To plant trees in memory, please visit the Sympathy Store.
MEMORIAL EVENTS
Nov
12
Burial
10:00a.m.
Gerald B.H. Solomon Saratoga National Cemetery
Schuylerville, NY
MAKE A DONATION
MEMORIES & CONDOLENCES
4 Entries
I was in the Environmental Studies program in the mid 70s. Lou has been a lifelong friend since then, visiting here in VA several times with the trees sprouting in the back of the Subaru and all- grinning at the memories. Lou taught me so much and truly shaped my life and how I have lived it, in service to others and to all that is JUST. I would not be the person I am without having experienced Lou's input. I am grateful that it helped me live my life toward a best purpose serving others and the animals they love. I reach out to anyone who was in the Environmental Studies Program at SUNYA (I was '75-77, but all years) who may wish to be in touch in Lou's memory. Rest in the peace you spent nearly a century working to spread in our world, Lou. With Gratitude, Kathy
Kathy Davieds
November 13, 2021
Condolences to Lou's family and friends I met Lou when I interned with the NY State Assembly. He inspired me to my career in drinking water. I'm sure he inspired many students and others.
Jane
Work
November 12, 2021
I am deeply saddened by the loss of my good friend, Lou Ismay. Lou Ismay changed my life. As a 14-year-old, I was a with a group of history-loving teenagers who joined Lou's archaeological project at historic colonial Crown Point, in an area that is today part of Crown Point State Historic Site. This project thrilled me, and with Lou's guidance, support, and encouragement I decided to become a historical archaeologist. He assisted me in writing my first archaeological report in 1959, which was about the Crown Point excavations. From 1956 through 1958 I excavated at Crown Point under Lou's guidance, and my research interest in Crown Point continues to the present day. I have had a rewarding and fulfilling career in historical archaeology. The excellent Times Union obituary does not tell the full story of Lou's accomplishments and positive impact on the lives of others. In the late 1950s he taught 6th grade in the Nassau, N.Y., grade school. He then became director of the Rensselaer County Junior Museum, and in 1964 and 1965 he served as the second director of the Society for the Preservation of Long Island Antiquities. Later in the 1960s he directed the archaeological excavations at the site of the Albany Glass Factory in Guilderland, N.Y. Lou Ismay inspired others to follow their dreams. He was a unique and brilliant individual, with a commitment to the education of young people, and I will never forget him.
Paul R. Huey
November 10, 2021
Truly a wonderful person and outstanding teacher. Reflecting on the classes I took with him in the mid 70´s at SUNY Albany and understanding how he changed the way I looked at the world....shaped my career and life in so many ways. RIP Professor.
John G.
November 7, 2021
Showing 1 - 4 of 4 results