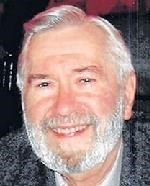 BORN
1941
DIED
2020
FUNERAL HOME
Parker Bros. Memorial Funeral Home, Inc.
2013 Broadway
Watervliet, NY
Wertalik, Louis F. M.D. CLIFTON PARK Louis F. Wertalik, M.D., age 79, died peacefully, holding the hand of his beloved wife Ann, on April 19, 2020, at the Hospice Inn at St. Peter's Hospital. Dr. Wertalik was born in Westover, N.Y. in 1941 and was the son of the late Louis and Antoinette Wertalik. He was a graduate of Union College and received his medical degree from the State University of New York at Buffalo School of Medicine. He completed residency training at E.J. Meyer Memorial Hospital in Buffalo, followed by a fellowship in hematology and oncology at The Ohio State University. Dr. Wertalik began military service in 1971 as a major in the United States Air Force. He was stationed at Scott Air Force Base Medical Center in Illinois, a reference hospital in oncology and hematology serving a ten-state area. While there, he was named "Physician of the Year" for his contributions to the training of family practice residents. In 1973, he opened a private practice at St. Clare's Hospital in Schenectady and served as attending physician at both Ellis Hospital and St. Clare's Hospital, where he was appointed chief of oncology. Among his many professional affiliations, Dr. Wertalik served on the board of directors of the American Cancer Society, Schenectady County Unit and was chairman of its professional education committee. He served as liaison associate for the American College of Surgeons and was named to the board of directors of Haven Grief Counseling Center. He also served as clinical assistant professor at Albany Medical College. Of significant note, Dr. Wertalik was a founding board member and co-medical director of Hospice of the Capital District and is recognized for having pioneered the region's first hospice interdisciplinary team and the development of pediatric hospice care. As a founding physician of Riverview Cancer Center in Rexford, in 1988, he was instrumental in expanding the delivery of world class cancer care for thousands of patients throughout the greater Capital Region and beyond. In 1995, Dr. Wertalik received the highest award given at St. Clare's Hospital, the Spirit of Healing Award, for healthcare excellence and leadership. Lou was known for his kindness, generosity, and wisdom that extended far past his professional career. He was a cherished friend to all he met, always putting others needs before his own. He truly lived life to the fullest. The impact on the lives of people that he touched was priceless and immeasurable. He had many passions including photography, bowling, and being in nature. He enjoyed traveling, especially to Captiva and Disney World. Lou was passionate about sailing and loved summers spent in Lake George on his boat. He enjoyed a good scotch, especially when watching his beloved Buffalo Bills. For all of his accomplishments, his greatest joy in life was his family and friends. Dr. Wertalik is survived by his wife Ann Wertalik (Postolowsky); his children, Louis J. Wertalik (Paula), Annette Collins (Michael), Gina Basey (Leon), Steven Angerosa (Lauren), and Larissa Wertalik (Larry Nolan); his grandchildren, Caitlyn, Brian, Laura, Jillian, Halle, Hayden, and Parker; his sister Patricia Murphy (the late Richard Murphy); his nieces, nephews, and cousins; his constant four legged companion Marko and many friends that had become family. Due to the current restrictions, a private funeral service will be held for immediate family. A celebration of Lou's life will be announced at a later time when we can all gather together safely. In lieu of flowers, contributions may be made to St. Peter's ALS Center, 19 Warehouse Row, Albany, NY, 12205 in memory of Louis F. Wertalik, M.D. Visit parkerbrosmemorial.com to leave a message of condolence for Lou's family.

Published by Albany Times Union on Apr. 23, 2020.
To plant trees in memory, please visit the Sympathy Store.
MEMORIAL EVENTS
To offer your sympathy during this difficult time, you can now have memorial trees planted in a National Forest in memory of your loved one.
Funeral services provided by:
Parker Bros. Memorial Funeral Home, Inc.
MAKE A DONATION
MEMORIES & CONDOLENCES
22 Entries
Ann and Larissa
So sorry for your loss words cant do justice to years of uncertainty
Please cherish the great times together as we do. The New Years parties WE WILL NEVER FORGET: Neighbors move on but great friends never do. Will will. All see each other on the other end. KC and AJ


April 30, 2020
Lou was a gift to all who knew him, touching many lives with great compassion,leadership and love . We journeyed ALS together for many years and he became my honored friend.
Such strength and love I witnessed in this special family.
Ann and Larissa-wishing you rest and peace now as he lives on in your hearts.
Love, Karen
Karen Spinelli
April 28, 2020
Nusia and Larissa, we are sorry to hear about Lou's passing. Wish we could be there with you in thee difficult times.

~Mark, Martha, Simon and Matthew
Mark Chodan
April 27, 2020
It was a privilege to care for him and your beautiful family at the end of his life. Thinking of you all with much love in my heart.
Katie
April 24, 2020
Ann and Family,
we are so sorry for your loss. We will always have very special memories of Doc, you and Larissa here at the marina.
Michael and Teresa White
April 24, 2020
Ann and Larissa
So sorry to hear the news. What an amazing person. Deepest sympathies.
Donna and Henry
Donna Neilley
April 24, 2020
Ann, I am so sorry to learn of your loss. When we met with Sue and Tariq and you were telling me about him I knew he was a remarkable person. I hope your fondest memories will bring you some comfort.
Deborah Hirt
April 24, 2020
Ann and Family, Our thoughts and prayers are with you at this difficult time.It's been a pleasure to know such a great man who helped so many people.Bill LaChapelle and your friends at Mobility Works.
April 24, 2020
Ann,
With sincere sympathies to you and your family.
Joanne Pelletier
April 24, 2020
Such heartbreaking news. God bless you Ann and your family.
Karen Bradley
Friend
April 23, 2020
A wonderful compassionate physician. Worked as a nurse during his years at St.Clare's. May he rest in peace with Jesus.
Angie Stewart
April 23, 2020
Christ is Risen!
Dear Ann,
Our thoughts and prayers are with you and your family at this difficult time. God rest his soul amount the holy ones. '!
Fr. Mikhail St. Nicholas Church
April 23, 2020
Anne and family.
Dr. Wertalik was one of the kindest and most caring people I know. I had the pleasure of working with him at Riverview Cancer Care.
He fought a long hard battle. He will be greatly missed by all.
Anne - God bless you, I know you always kept him going.