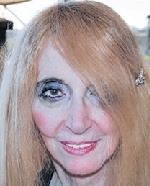 DIED
December 9, 2019
Lifshin, Lyn NISKAYUNA Last week on December 12, 2019, Lyn Lifshin of Niskayuna, passed away at the home of her friend Albert Jordan in Vienna, Va. following illness and a fall. Lyn was a poet who had written over 130 books and chapbooks and edited four anthologies of women writers. Her poems have appeared in most poetry and literary magazines. She has given more than 700 readings across the U.S.A. and has appeared at Dartmouth and Skidmore colleges, Cornell University, the Shakespeare Library, Whitney Museum and Huntington Library. Lyn also taught poetry at the University of Rochester, Antioch, and Colorado Mountain College. Winner of numerous awards including the Jack Kerouac Award, she is the subject of the documentary film "Lyn Lifshin: Not Made of Glass." For her dedication to the small presses which first published her, and for managing to survive on her own apart from any academic institution, she has earned the distinction "Queen of the Small Presses." Perhaps it was Robert Frost who helped launch her lifetime of poetry when in her childhood he complemented her poetry. She has also been praised by Ken Kesey and Richard Eberhart, and Ed Sanders has seen her as "a modern Emily Dickinson." She recently was named a Literary Legend by the Albany Public Library Foundation. She also developed a passion for dancing - ballet, ballroom and Argentine tango. A celebration of her life is being planned in Schenectady for May/June. Please send remembrances and expressions of interest in the celebration of life to [email protected]

To plant trees in memory, please visit our Sympathy Store.
Published by Albany Times Union from Dec. 20 to Dec. 22, 2019.
MEMORIAL EVENTS
No memorial events are currently scheduled.
To offer your sympathy during this difficult time, you can now have memorial trees planted in a National Forest in memory of your loved one.
GUEST BOOK
10 Entries
So sorry to hear. We have been good friends of her sister Joy for many years.
Love,
Rose & Betty June Farkas
Rose Farkas
December 28, 2019
I met Lyn at one of her readings over 30 years ago. I admired her character.....the black turtleneck sweater, long, straight hair, a London cap (and sometimes a baret), the black eyeliner and pale lips....and the animated way she read her work. She enthralled me, captivated my senses. And I kept coming back for more, taking her workshops and buying her books.
As an aspiring poet myself, she encouraged my work. Now, I am a published author of 9 books. I write historical and paranormal romance and women's mainstream. I'm with two publishers, and also favor the small presses, as Lyn did. If not for her encouragement I wouldn't have gone ahead as I did, branching out from poetry to novels.
My heart aches for her passing. The world has truly lost a talented writer and an amazing lady. My heartfelt codolences to her friends and family. She will be extremely missed.
Roberta C.M. DeCaprio
www.rcmdecaprio.com
Roberta DeCaprio
December 23, 2019
Sending my sincerest sympathies to all of her family and friends
from her cousin
Linda Lazarus
December 23, 2019
I am saddened to learn of Lyn's passing. I attended so many of her readings. She was an inspiration to all she met throughout her incredible career. She looked people in the eye when she met them, listened intently to what they had to say, and greeted them with compassion, concern and energy to inspire them for their own work. Just hearing her name in writing circles inspired people. Fly high, Lyn.
December 22, 2019
One of my closest and dearest friends for decades- I'm devastated she's gone though her superb work lives on /- She never got all the major awards she deserved though
no one was harder working or more prolific//
Laura Boss
December 22, 2019
It was an honor to meet Lyn this year. Such a beautiful person. Her words will live forever.
Alexis Bhagat
December 21, 2019
Seems like, in almost every publication that accepted my work, I would see her name. She was everywhere! Now, like Orpheus, her spirit speaks to us in everything.
Edward Fisher
December 21, 2019
i am so saddened to hear of lyn's passing. in '84, i, along with several others, sat cross legged on a dance floor in schenectady, where lyn led poetry workshops, then participated in dance classes immediately after. i got so much out of her mentor ship,that i kept signing up for workshops, and was with her for about a year. what an experience!! under lyn's amazing insights and directive, we were guided onto a path filled with a newfound sensitivity and awareness of ourselves and surroundings; sights, sounds, scents, even other's conversations; dreams, memories..soon became our inspirations for writing. how fortunate we all were for the opportunity. she was very good at keeping in touch with her students afterward, as well. lyn was a one of a kind, warmly passionate and supportive person. she will be missed greatly. RIP, beautiful ms. lifshin.
debora bump
December 20, 2019
I remember Lyn with affection and respect from her days at the University at Albany. Arms around all who loved her. Please keep me informed about the celebration of her life.
Gloria desole
December 20, 2019
I have known Lyn for many years. She was a incredibly talented poet, very sensitive & intuitive
, a prolific author & terrific ballroom dancer..My condolences to her friends, & family.
Paul Tocker
December 20, 2019