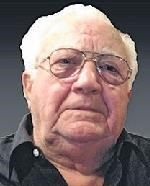 BORN
1928
DIED
2021
FUNERAL HOME
Dufresne & Cavanaugh Funeral Home Ltd.
149 Old Loudon Road
Latham, NY
Caruso, Marco J. LATHAM Marco J. Caruso, 92 of Latham, passed away peacefully on Monday, June 14, 2021, following a brief illness. He was the son of the late Michael and Maria Grace Petracci Caruso, born on September 18, 1928, in Troy. He graduated from Troy High School and was enlisted in the U.S. Army in the Quartermaster Corps in Fort Lee, Va. from 1951 to 1953. Following his duty, Marco worked at General Electric Company and was employed at Norton Company for 27 years until his retirement. Marco loved spending time with family and friends and always boasted to others how proud he was of his children and their numerous accomplishments. He loved spending time with his grandchildren, going out to dinner, playing cards, and spoiling them. He was especially fond of spending time in Lake George, barbecuing, and playing bocce and yard games and listening to Italian music... his favorite Dominick the Donkey. He had a love for sports since his youth. He was involved with the Troy boys baseball team, the Troy All Stars football league and enjoyed coaching CYO basketball. He rooted for his favorite teams - the Yankees and New York Giants and stayed up all night to watch the end of the game to see his team win. In addition, he enjoyed frequent trips to the casino and playing the slot machines. He loved it so much he had two of his very own slot machines at home to play. Survivors include his three daughters, Madeline Caruso, Katherine Caruso, and Maria Caruso; and his son Michael (Sharon) Caruso. He is also survived by, and will be forever missed by, his grandchildren, Jonathan Caruso Andrue Caruso, Ali Caruso, Jared Caruso, Maddalena Blondell, Victoria Blondell and Harry Blondell; and his sister Angela "Angie" (Joseph) Wilk. He is also survived by several nieces, nephews, and cousins. Marco was predeceased by his four brothers, Benjamin, Nicholas, Louis, and Michael; and his sister Antoniette (Centrella). Special thanks to Home Based Primary Care: Dr. Fellegi and nurse, Deborah McHugh for their amazing care and concern over the years and the doctors and nurses at the VA Hospital, St. Peter's Hospital, and Van Rensselaer Manor. A Mass of Christian Burial will be held on Monday, June 21, at 11 a.m. in St. Anthony's Church, 28 State St., Troy. Relatives and friends are invited and may call on Monday, June 21, between 8:30 and 10 a.m. at the Dufresne & Cavanaugh Funeral Home, 149 Old Loudon Road, Latham. Interment with full military honors will be held in the Saratoga National Cemetery, 200 Duell Rd., Schuylerville. Donations to the Home Based Primary Care Team, Albany Stratton VAMC, 113 Holland Ave., Mail code 111M, Albany, NY, 12208 would be appreciated. For directions, information or to light a memory candle for the family please visit dufresneandcavanaugh.com

To plant trees in memory, please visit our Sympathy Store.
Published by Albany Times Union from Jun. 17 to Jun. 20, 2021.
MEMORIAL EVENTS
Jun
21
Calling hours
8:30a.m. - 10:00a.m.
Dufresne & Cavanaugh Funeral Home
149 Old Loudon Road, Latham, NY
Jun
21
Mass of Christian Burial
11:00a.m.
St. Anthony's Church
28 State St., Troy, NY
Funeral services provided by:
Dufresne & Cavanaugh Funeral Home Ltd.
MAKE A DONATION
MEMORIES & CONDOLENCES
3 Entries
To my entire family I offer my sincere sympathy. While we gathered in sadness we found joy in our shared memories of a life filled with much love. God bless each of you.
Mary Grace Caruso Cahill
Family
July 11, 2021
At this difficult time, our sincere condolences go out to the entire Caruso Family on the loss of your father.
Deanna & Howard Rubinger
Other
June 20, 2021
Marc was our neighbor and friend for the past two years. One of the first days we moved here, he waved and welcomed us to the neighborhood and we became fast friends. He was the kind of person that you felt you knew your whole life. Kind, soft spoken and a great sense of humor. We will miss our conversations. He loved his family and loved to talk about them. We would like to extend our deepest condolences to Marc´s family. We will miss i too you dear neighbor and friend.
Julie and Chuck Phillips
Friend
June 19, 2021
Showing 1 - 3 of 3 results