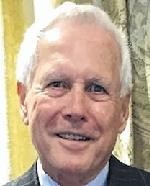 BORN
1932
DIED
February 17, 2021
Mullaney, Richard F. "Dick" SARATOGA SPRINGS Richard F. "Dick" Mullaney passed away peacefully on February 17, 2021, at Saratoga Hospital, surrounded by his family. Dick was born in Troy in October of 1932, the eldest son of the late Richard F. and Helena (Tacelli) Mullaney. He grew up in a small house with his six brothers and sisters on 3rd Avenue in Watervliet, north of the Arsenal. Dick loved everything about the Watervliet of those days with its ethnic neighborhoods and, of course, Brotherhood Park. After graduation from Watervliet High in 1950, Dick enlisted in the Army and was stationed in Germany. While in Germany his love for reading and education blossomed. Upon his return, he graduated from Siena College and then Albany Law School, where he was a member of the Law Review, before being hired by the Leary and Fullerton law firm in Saratoga Springs in 1959. For nearly 60 years, Dick was a fixture in the Saratoga Springs community. He built a thriving law practice, counseling leaders in business, education, and government. Dick served as acting city judge and city attorney, advising mayors across the political spectrum, and he was instrumental in the building of the City Center. He was proud to have his daughter Eleanor join the firm in 1983. Dick was a regular on Broadway and would take a walk each day, visiting clients and friends, stopping by his favorite haunts (Mother Goldsmith's, Lou's / Compton's, Mrs. London's, Sperry's, Lyrical Ballad, the Northshire Bookstore and all the rest). He was a part of the fabric of Saratoga Springs and spent much of his life dedicated to the betterment of his community. His impact on the City outlives him. Dick pursued his recreational activities with the same fervor with which he went about his professional life. He was an avid golfer and cyclist, but his true love was the Adirondacks. In his later years, Dick spent most mornings in his office overlooking Broadway, and the afternoons at his beautiful home on Friends Lake, kayaking, hiking, snowshoeing, or reading James Joyce on the deck. When he wasn't pulling his grandchildren on the water ski boat, he was regaling them with stories of the Yankees, Shakespeare, or the haunted house on Fifth Avenue. Dick was a man of many interests, and anyone who was lucky enough to spend time with him walked away from their conversations having learned something new. Dick is survived by his wife, Mary Lou; his siblings, Patricia Maron, Carol Ashline, John Mullaney, and Linda Mullaney; his longtime companion Joanne Carlow; his three children, Richard Mullaney (wife Marian), Eleanor Mullaney (husband Robert Coughlin) and Agnes Mullaney (husband Jeffrey Paisner); his six grandchildren, Robert Coughlin, Kathryn Maggiotto, Richard Mullaney, Colleen Mullaney, John Mullaney and Mikaela Straus; two great-grandchildren, Jane Coughlin and Molly Maggiotto with a third great-grandchild on the way, and many nieces and nephews. In addition to his parents, Dick was predeceased by two siblings, Phyllis Ackerman and Eugene Mullaney. Dick's family would like to express its gratitude to the doctors, nurses and staff of Saratoga Hospital who provided wonderful care and compassion during his final days. Due to the current environment, services will be private, but the family hopes that anyone touched by Dick's remarkable life will join them in a celebration this summer, COVID-19 permitting. Burial with military honors will take place in the Gerald B.H. Solomon Saratoga National Cemetery, 200 Duell Road, Schuylerville. In lieu of flowers, the family suggests that donations may be made to Franklin Community Center, 10 Franklin St., Saratoga Springs, NY, 12866. Arrangements are under the direction of the William J. Burke & Sons/Bussing & Cunniff Funeral Homes of North Broadway. Online remembrances may be made at burkefuneralhome.com.

To plant trees in memory, please visit our Sympathy Store.
Published by Albany Times Union on Feb. 23, 2021.
MEMORIAL EVENTS
No memorial events are currently scheduled.
To offer your sympathy during this difficult time, you can now have memorial trees planted in a National Forest in memory of your loved one.
Funeral services provided by:
William J. Burke & Sons - Saratoga Springs
GUEST BOOK
24 Entries
To the family of Richard, I send my deepest condolences. He was a truly wonderful and supportive colleague to me when he served as the retained attorney for the Student Government Association of Skidmore College for many years. I often consulted him on legal matters that involved student activities, special projects, student governance issues, and individual students who needed legal representation. For me, he was counselor and mentor on countless legal questions throughout my 32 years at Skidmore. He was a beautiful man; so very kind in so many ways; and so incredibly proud of his family. I am sad to read of his passing, but I am so proud to have worked with him and so blessed to have known him.
God Bless,
Anita Steigerwald
Anita Steigerwald
Friend
March 2, 2021
My condolences to the Eleanor and her family. I enjoyed chatting with Dick whenever we happened to bump into one another on the street or at The Hungry Spot. Afterwards I always thought "I want to be just like Dick Mullaney when I grow up".
Frank Laskey
Friend
March 2, 2021
Thank you for your service to our country.

Rest In Peace.
March 2, 2021
Richard has been such a part of Saratoga Springs that it will be difficult to imagine the city without him. My condolences to all the family.
Beverley Mastrianni
Friend
March 1, 2021
Dear Mary Lou and Family,
Cousin Dick's remarkable and inspirational journey left an enriching imprint on any of us lucky to be touched by him. As a young boy, he was an influential model and hero for me and my brother. He was not only a beloved cousin but also a Great Friend.
His trademark empathy, kindness, generosity, wit, and wisdom made him a unique "Man For All Seasons"!
Dick's gentle nature, and essence and smile will be deeply missed but NOT forgotten.
My loving thoughts and prayers are with the Mullaney Family
Don Galias
Family
February 27, 2021
Eleanor and the entire Mullaney family,
My sincerest condolences for your loss. Eleanor, I remember when you joined him in practice, which only seems like yesterday. May the good memories, admiration and love carry you through this painful time. With warmth.
Cathy Marchese Bennett
Classmate
February 27, 2021
My condolences to the Mullaney family. Dick was an important personal and professional friend who could always be counted on for good and honest advice over lunch or after a late night school board meeting. He was a Saratoga supporter who will be long remembered.
John MacFadden
Friend
February 27, 2021
Sincere and warm condolences to Dick's family. Farewell to a keen observer of Saratoga Springs. My family appreciates your long friendship.
michael veitch
February 27, 2021
My deepest sympathy to the family of Richard ( Dick ) Mullaney. I worked as a manager at at Sperry's Restaurant for many years and had the privilege of getting to know him and serve him lunch or dinner or just converse with him while he was there. Richard was a true gentleman and so kind to everyone. He always had a fun story and we enjoyed talking about spending time with our families in the Adirondacks. Such a great person.


Carolina Godlewski
February 24, 2021
We are so saddened to hear about Dick’s passing. You have our deepest and sincerest sympathies. He was a man of class, character and kindness. Keep all of the sweet memories in your heart.
Ed and Cindy Finger
Friend
February 22, 2021
We will always remember Dick as a true renaissance men. He mesmerized us with all of his stories of local history and lore. His experiences and knowledge of Saratoga Springs and the surrounding area were full of detail and color. Thank you Dick. You will be missed by so many.
Florence & A. Wayne Wheeler
Friend
February 22, 2021
I found Dick to be a wise counsellor and a good friend during my years in City Hall and thereafter. Yes, he was a fixture in the community, and on Broadway, for decades, and is assured a permanent place in our city's history.
Kenneth Klotz
Friend
February 22, 2021
To Dick's family my heartfelt sympathy & prayers. Joanne so sorry for the loss of your friend. Just walking Broadway & growing up in Saratoga I often had a chance to chat with Dick for even a minute - got to know him a little better as a legal secretary. He never had an unkind word but always a smile & warm greeting. Will definitely miss him.
JoAnn Hughes
Friend
February 22, 2021
We are so very sorry to hear of Dick's passing and the impact his loss has upon his family. May memories of positive, happy times together with him help you as you go through this sadness.
Joan & Dick Rowland
February 22, 2021
To Richard's Family and Friends,
We would like to express our sincerest condolences.
Sincerely,
The Staff at Burke Funeral Home
February 22, 2021
Mr. Mulllaney always made me feel that he was glad to see me. He was never too busy to take a moment to show that he was interested in what you were doing. May he rest in peace and may God bless his family.
Fran LaBelle
Friend
February 22, 2021
I always considered Dick a true friend, gentleman and great. attorney. He will be missed by all of those that knew and respected him
John Pastore
Friend
February 22, 2021
My condolences to the Mullaney family. Dick’s obituary aptly describes him as a talented attorney,a city hall advisor, and a popular man about town. I am proud to have been his legal colleague and his friend.
Harry Snyder
Friend
February 22, 2021
My Sincerest Condolences to the Mullaney Family. You are all in my prayers.
Denis Butler
February 21, 2021
Mr Mullaney was always kind to me and I will remember some advise he gave in my early years.
Rest in Peace
A true loss for Saratoga
One of the great guys.
My condolences to the family ♥
Timothy Marcil
Friend
February 21, 2021
So very sorry to hear, a very nice man & family ! My sincere Condolences
Rene LeRoux
Friend
February 21, 2021
How lucky we were to have Dick as our wonderful neighbor for so many years. His beautiful smile and kind ways, and that twinkle in his eyes, endeared him to all. Saratoga has lost a real treasure. God Bless Dick! ❤
Weezie Foye
Friend
February 21, 2021
Grief can be so hard, but our special memories help us cope. Remembering you and your loved one today and always.
Paul L Varley
Friend
February 21, 2021
Dick truly had a positive impact on everything he touched, including the many people who’s lives he enriched with his presence. We will greatly miss him, especially his warm smile and enduring wisdom and charm. All of the Wilmot family sends their sincere condolences to the family for their loss of a wonderful man, father, and grandfather. Bill, Joan, Brendan and Devin
Joan and Bill Wilmot
Friend
February 21, 2021