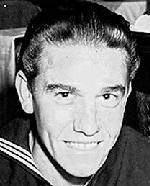 FUNERAL HOME
Thomas P. Mooney Funeral Home
11 Elm Street
Nassau, NY 12123
Decker, Russell Jr. NASSAU Russell "Hoppy" E. Decker Jr., of the Village of Nassau, who was a memorable character to all who knew him, passed away on May 10, 2021, at Samaritan Hospital. He was 97 years old. Hoppy was born in 1923 in Niagara Falls, N.Y., the son of the late Russell E. Decker Sr. and Marjorie (Haven) Decker. Hoppy's family moved to the Village of Nassau when he was six years old. Hoppy joined the Regular Navy in 1942 to serve his country during World War II. While stationed in Pensacola, Fla. he married his high school sweetheart Gretchen Phillips in 1945 in nearby Bay Minette, Ala. He served in the Navy for five years. After the birth of their first child, Donna, Hoppy and Gretchen returned to make a home in the Village of Nassau for their remaining 75 years together. Hoppy was the proprietor of the Nassau Gulf Station in the '50s, the Nassau Texaco Station in the '60s and then transported antique cars full-time across the U.S. Hoppy was a founding member of the Nassau Fire Department and Ambulance, and the Automobilists of the Upper Hudson Valley. It was always said that Hoppy loved "anything with a motor and wheels." He was a collector of antique cars, motorcycles, bicycles and trains. Hoppy loved pre-war Buddy L toy trucks and anything concerning Nassau history. He was an avid auto racing enthusiast and a well-known Ford Motorcar Company supporter. Hoppy is survived by his wife Gretchen (Phillips) Decker; his children, Donna Decker, Susan Canfield and Russell E. Decker III, all of Nassau, Jane (Paul) Visconti of North Carolina; his favorite daughter-in-law Jacqueline Decker; and nine grandchildren, Rod Laraway, Chad Laraway (Amy), Clifton Laraway (Tina), Scott Canfield (Donna), Jennifer Gorman (Jesse), Stephanie Dunavin (Billy), Jessica Decker Emerick, Russell Decker (Megan), and Peter Visconti. He is also survived by 15 great-grandchildren and two great-great-grandchildren. Hoppy's family would like to thank the nurses and staff on the fifth floor at Samaritan Hospital. Relatives and friends are invited to call at the Thomas P. Mooney Funeral Home, 11 Elm St., Nassau on Friday from 4-7 p.m. A graveside service will be held on Saturday at 11 a.m. in the Nassau-Schodack Cemetery, Route 203, Nassau. In lieu of flowers, contributions may be made to the Nassau Beautification Committee by sending a check to the Village of Nassau, P.O. Box 452, Nassau, NY 12123. Please make note that your contribution is for the "Beautification Committee." Online condolences may be offered at Mooneyfuneralhome.com

To plant trees in memory, please visit our Sympathy Store.
Published by Albany Times Union from May 12 to May 13, 2021.
MEMORIAL EVENTS
May
14
Visitation
4:00p.m. - 7:00p.m.
Thomas P. Mooney Funeral Home LLC
11 Elm Street, Nassau, New York
May
15
Graveside service
11:00a.m.
Nassau Cemetery
5341 NY Rt. 203, Nassau, New York
Funeral services provided by:
Thomas P. Mooney Funeral Home
MEMORIES & CONDOLENCES
7 Entries
Hoppy was a great guy. It was wonderful to live next door to all of you on Westbrook Dr. Please accept my condolences to you all. Love and peace, Betsy
Betsy Hillenbrandt Brumberg
May 23, 2021
To the entire Decker Family, We were so very sorry to hear of the passing of your husband and father. Our Dad and Mom have many fond memories of the many stories of the village your Dad would tell.Please accept our sincere condolences,and find comfort in all your wonderful memories.
Austin,Jean,Chris( Kochem),Arlene (Kincaid),and Deb (Ramsay) Lansley
May 14, 2021
Gretchen, Donna and Susan, Many fond memories of Hoppy, he was a special person, and anyone growing up in Nassau during the 50s and 60s certainly knew he was their friend. Was sorry to hear of his passing, thoughts and prayers are with you.
Janet Gorman Rondeau
May 14, 2021
Rip Hoppy
Buddy and Sue Palmer
May 14, 2021
Gretchen, Donna, Susan, Russ and Jane: I am saddened to read of the passing of your dear husband and dad. Although I have but a few memories of my own, I can recall my parents often speaking fondly of Hoppy. Apparently, he was a legend in his own time. May he rest peacefully, having fought the good fight and may all of you be comforted by the knowledge that others care. Sincerely, Roberta Tennant Wasson
Roberta Tennant Wasson
May 12, 2021
Sorry for your loss, I have many fond memories of Hoppy. While I lived in Nassau.
Richard Agan
May 12, 2021
Rest in peace Mr. D. I'll miss you trying out my new goodies ,as you were my best taster. Till we meet again.
cindy bevens
May 12, 2021