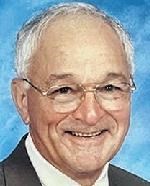 BORN
1932
DIED
2021
Bove, Vincent Louis Sr. AUSTIN, Texas Vincent Louis Bove Sr., a loving and dedicated husband, father, and grandfather, passed away August 31, 2021, at the age of 89. Romantics in his family say he timed his departure to meet his wife in heaven two days before her birthday; cynics say due to his financial background he left at the last day of the month to close the books cleanly. He loved people and enjoyed making new friends wherever he went and will be remembered for his kind heart, outgoing personality, the easy, naturally confident way he carried himself, and how he put others at ease. Vince was born at home on April 13, 1932, in Mechanicville to Gennaro Bove and Louise Aiardo Bove. Growing up, he worked at his father's fuel distribution business delivering coal and fuel oil after school and learned how to drive a truck before his tenth birthday. One of his extra jobs was selling newspapers at the town's train depot where he saw men in suits commuting to the big city of Albany. He recalled thinking at the time "I want to do what they do" - not knowing exactly what that was. Vince left the family business after high school and enrolled in Albany Business College. While there, he met Barbara Mary Gorman. After relentlessly pursuing her for two years, they married on June 12, 1954, the same year Vince began serving in the U.S. Navy during the Korean War. They started their family while Vince was stationed in Pensacola, Fla. Following his honorable discharge, he returned to school, graduating from Bryant College in Rhode Island with a degree in finance. He began his career with IBM in New York City the same year he graduated and the same year their second child was born. Assignments in Lexington, Ky., Austin, Texas, Franklin Lakes, N.J., and White Plains and Armonk, N.Y. followed, as did three more children. During his distinguished 30-year career, Vince traveled extensively, representing IBM in Germany, Canada, the U.K., and Mexico and was appointed, by Tom Watson Jr., as the director of finance for the 1980 Winter Olympic Games in Lake Placid. A devout Roman Catholic, he was chosen to join the Knights of Malta by Most Reverend Bishop Thomas A. Boland while a member of St. John the Evangelist Church in Bergenfield, N.J. Later, he and Barbara were proud founding members of St. Theresa Catholic Church in Austin, Texas and served on numerous committees there and within the diocese. They were also members of St. Monica's Holy Family Guild where they forged enduring and close friendships. Other positions Vince held include: member of the Mayor's Advisory Committee, vice-president of Catholic War Veterans, treasurer of the Tax Payer's League, manager of PAL Baseball, member of the St. Theresa Advisory Board and Finance Committee, board member of Child and Family Services, director of the United Way of Austin, chair of the Catholic School Board of Austin, treasurer of Northwest Little League, and co-president, with Barbara, of Murchison Junior High School PTA. Upon retirement from IBM in 1987, Vince worked as an independent business consultant before beginning his "senior tour" back in Austin, Texas where he and Barbara resumed lifelong friendships. Always active, Vince relished spending time with family and friends while pursuing his passion for golf and snow skiing, both of which he participated in until age 87, when COVID-19 curtailed most activities. He and Barbara loved being grandparents and their five grandchildren loved spending time with Papa and Mimere. Vince shared his love of golf, skiing and Lake Placid, with all of them and treasured his time on the golf course, ballfields and ski slopes of Whiteface Mountain almost as much as they did. His last years were happily spent at Westminster where he immediately became the unofficial mayor and head cheerleader while resuming his tradition of committee service. His friends - old and new - looked forward to a warm smile, a hug, a story, or an impromptu Italian song. Vince received many honors during his career, but his family is most proud of the way he lived his life with integrity. He was a loving, kind, and generous person and a tremendous role model for all of us. Vince was preceded in death by his beloved wife, Barbara; his parents; his brother, Frank and his wife Mary; and his nephew, James Bove. He is survived by his children, Tony, Marc (Kimberly), Marianne Dorer (David), Vincent Jr. (Tani), and Christopher (Deborah). He is also survived by his grandchildren, Victoria Lanier (Greg), Jack Dorer, Alec Bove, Briley Bove, and William Dorer; his brother, John and his wife Donna; and by several nieces and nephews whom he loved dearly. A funeral Mass will be offered on September 27, at 10 a.m. in St. Theresa Catholic Church in Austin, Texas, officiated by his long-time friend, Monseigneur William Brooks. A reception will immediately follow at the church. A private burial will take place later that day. In lieu of flowers, donations may be made in Vince's name to St. Jude Children's Research Hospital.

Published by Albany Times Union on Sep. 19, 2021.
To plant trees in memory, please visit the Sympathy Store.
MEMORIAL EVENTS
Sep
27
Funeral Mass
10:00a.m.
St. Theresa Catholic Church
Austin, TX
MAKE A DONATION
Please consider a donation as requested by the family.
MEMORIES & CONDOLENCES
2 Entries
To all of Vince´s Family: I am very sorry for your loss.
Mike McNulty
September 19, 2021
Only got to know Vince for a limited period of time, but he was the BEST
Bill Pearce
Work
September 19, 2021
Showing 1 - 2 of 2 results