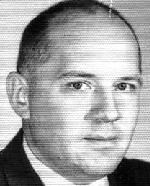 BORN
1930
DIED
2020
ABOUT
Saugerties High SchoolShaker High School
FUNERAL HOME
Gordon C. Emerick Funeral Home
1550 Route 9
Clifton Park, NY
Jerwann, William A. Jr. CLIFTON PARK William A. Jerwann, Jr., 90 years old, passed away on December 3, 2020. He was born at home in Saugerties, N.Y. on February 16, 1930, and was the son of the late Blanche (Hoff) Jerwann and William A. Jerwann, Sr. Bill graduated from Saugerties High School class of 1948. He attended the State University of New York at Oswego and graduated in 1952 with a B.S. in Industrial Arts Education. Upon graduation he enlisted in the United States Army. He served with the 5th Armored Division during the Korean Conflict from 1952-1954 and was honorably discharged. Bill started his teaching career in 1954 at South Colonie High School. He also attended the State University of New York at Albany, receiving his M.S. degree in Education Administration and certification in Educational Supervision. He accepted a position at the new Shaker High School as a member of the original staff and taught Industrial Arts until retiring in 1986. On August 17, 1955 Bill married Lois Jean Pebley of Johnstown, Pa. They most recently celebrated their 65th anniversary. Bill was a member of the Free and Accepted Masons, Shrine, and Scottish Rite Masons. He had always enjoyed music and had sung with the Catskill Glee Club. He was a member of the American Federation of Musicians and played the bass violin throughout Ulster County. He never forgot the fun time he had playing for Gov. Nelson Rockefeller's birthday party. For many years he had been active in the Boy Scouts, serving as an assistant Scout Master in Troop 48 of Clifton Park. Bill served on the National Cemetery Support Committee. His interests included shooting skeet and trap, fishing on the surrounding lakes and devoting over 30 years researching his family's genealogy. Bill was a member of the Shenendehowa United Methodist Church. Bill leaves his wife Lois Jean; a son Kevin, his wife Colleen (Behan) Jerwann and their daughter Kathryn; son Keith and his wife Susan (Litter) Jerwann. He also leaves several nieces and nephews. The family expresses their thanks for the care he received most recently at Judson Meadows and Glendale Home. Interment will be at Saratoga National Cemetery with a private service for the immediate family. Memorial contributions may be made via www.shrinershospitalsforchildren.org/springfield/ways-to-give or the charity of your choice. Arrangements have been entrusted by the family to the Gordon C. Emerick Funeral Home, 1550 Rt. 9 Clifton Park, NY 12065, 518-371-5454. For online condolences, please visit Gordoncemerickfuneralhome.com

Published by Albany Times Union on Dec. 6, 2020.
To plant trees in memory, please visit the Sympathy Store.
MEMORIAL EVENTS
To offer your sympathy during this difficult time, you can now have memorial trees planted in a National Forest in memory of your loved one.
Funeral services provided by:
Gordon C. Emerick Funeral Home
MAKE A DONATION
Please consider a donation as requested by the family.
MEMORIES & CONDOLENCES
0 Entries
Be the first to post a memory or condolences.