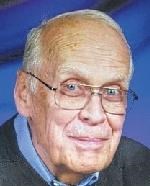 BORN
1939
DIED
2020
FUNERAL HOME
Gordon C. Emerick Funeral Home
1550 Route 9
Clifton Park, NY
Scherer, William F. Jr. BALLSTON LAKE William F. Scherer Jr. of Ballston Lake passed away unexpectedly at home on December 25, 2020. A son of the late William and Anne (Fitzpatrick) Scherer, Bill was born in Schenectady during 1939. Educated at Christian Brothers Academy and Siena College, Bill served four years in the U.S. Air Force. Following service, Bill embarked on a career in business, first serving with Albany Savings Bank and ultimately concluding his career as a vice president at electron microscopy supplier Ernest F. Fullam, Inc. of Albany. Married to Barbara C. Ryan of Troy, they recently celebrated 55 years of marriage. Bill is survived by his wife Barbara; daughters, Lisa (Robert) of Clifton Park, Karen (Brian) Kremer of Latham, and Susan (Eric) of Clifton Park; and grandchildren, Ryan, Rhys and Evan Williams, Ethan and Caroline Kremer, and Eric, Craig and Kelly Westervelt. He is also survived by a sister, Joyce Quigley of Wallingford, Conn.; and predeceased by a brother Robert. A proud father and grandfather, Bill valued his family the most. He enjoyed watching his grandchildren's athletic endeavors, spending time with his family, bowling, golfing and complaining about his beloved N.Y. Giants. Bill was also active with Corpus Christi Church in Ushers for over 45 years, serving in the ministries of finance, ushering and the welcome table. A funeral will be held on Tuesday at 9:30 a.m. in the Corpus Christi Church in Ushers where the Mass of Christian Burial will be celebrated. Friends may call at Corpus Christi Church from 9 to 9:30 a.m. Interment with full military honors will be in the Gerald B.H. Solomon Saratoga National Cemetery, Schuylerville. Due to the COVID-19 restrictions, facial coverings and social distancing will be strictly adhered. The Mass of Christian Burial will be live-streamed at corpuschristichurch.net. In lieu of flowers, donations may be made to Wildwood Programs or Autism Speaks, Inc. Arrangements have been entrusted by the family to the Gordon C. Emerick Funeral Home, Clifton Park.

Published by Albany Times Union on Dec. 27, 2020.
To plant trees in memory, please visit the Sympathy Store.
MEMORIAL EVENTS
Dec
29
Calling hours
9:00a.m. - 9:30a.m.
Corpus Christi Church
NY
Dec
29
Funeral
9:30a.m.
Corpus Christi Church
Ushers , NY
Funeral services provided by:
Gordon C. Emerick Funeral Home
MAKE A DONATION
MEMORIES & CONDOLENCES
7 Entries
I am so sorry for your loss. I will miss him.
Susan Myers
January 1, 2021
I have so many happy memories of the fun George and I had with Bill and you, Barbara. It is a blessing to have those memories to smile about on lonely days. God bless your family
Jean Hartshorne
December 28, 2020
All our memories of Bill are joyful. He served his familywell and faithfully. Passing when he did, christmas, shows God'sfavor for Bill. I'm reminded of how Bill will be welcomed in Heaven and eternal life. As Jesus said, "See I make all things new!" Enjoy your new life, cousin. Love you.
Albert and Janice Nous
December 28, 2020
Was great getting to know you through the Welcone Table. My thoughts and prayers are with Barbara and family
Marilyn Parmerter
December 27, 2020
I'm sorry for your loss Barbara. Keeping you and your family in my prayers.
Charlene Fowler
December 27, 2020
I couldn´t of asked for a better Godfather! I´ll always cherish our memories together!
Cynthia P Papin
December 27, 2020
I will always remember your wonderful sense of humor, cousin. Love and prayers to all. love, Paula
Paula Principino
December 27, 2020
Showing 1 - 7 of 7 results