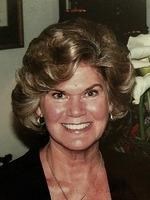 Billups
Beatrice "Bee" Moore Billups, beloved wife of husband Frederick "Bud" Billups; mother of son Bowen Billups (Sam Loutfi) and daughter Kathleen Morgan (Chip); sisters Geraldine Pearson, Sue Berry Nicholson (Nick) and Charlotte Moore; grandchildren Georgia and Justin Morgan; and many nieces and nephews, passed away on August 12 at the age of 80. She was daughter of the late Charles and Beatrice Moore and born on September 9, 1940 in Jacksonville, FL where she grew up and attended Robert E. Lee High School. After attending the University of Florida, she worked in the DC offices of Congressman Charles Bennett. In 1963 she began 57 wonderful years of marriage to her husband; they lived in various Mid-Atlantic cities before moving to Wayne, PA where they resided for 20 years. They then lived in Annapolis, MD for 30 years until moving to Newtown Square, PA in 2018. She completed her college education at Villanova University in 1989, graduated from General Theological Seminary (New York City) in 1992, and was ordained in 1993 when she became the first female full-time Episcopal priest serving a church parish on the Eastern Shore of Maryland. After leaving church ministry she had an extensive career in spiritual direction and counseling. She enjoyed interior design, gardening, and volunteering. Her love of life, keen sense of humor and gentle, kind and always loving approach was the way she was recognized by family, friends and colleagues. There will be a Celebration of Life at St. David's Episcopal Church, 763 S. Valley Forge Road, Wayne, PA on Saturday, September 11, at 1 PM. In lieu of flowers, contributions may be made to Johns Hopkins University with "IMO Bee Billups" noted on the memo line and sent to the Fund for Johns Hopkins Medicine, 750 East Pratt Street, 17th Floor, Baltimore, MD 21202.
Published by Florida Times-Union from Aug. 27 to Aug. 28, 2021.
To plant trees in memory, please visit the Sympathy Store.
MEMORIAL EVENTS
Sep
11
Celebration of Life
St. David's Episcopal Church
763 S. Valley Forge Road, Wayne, PA
MAKE A DONATION
MEMORIES & CONDOLENCES
Sponsored by Jacksonville.com.
2 Entries
May your hearts soon be filled with wonderful memories of joyful times together as you celebrate a life well lived. While we did not know Beatrice personally, we knew her through her thoughtful and kind son, Bo. She surely must have a very special person to have raised such a good human being. The Billups family is in our thoughts and prayers during this difficult time.
Katrina Garza & Eric Naranjo
Other
September 12, 2021
Our thoughts and prays are with Dee family. Dee was a great classmate at Lee to all. Carl Cochran LHC 1958
Carl E. Cochran
September 5, 2021
Showing 1 - 2 of 2 results