Gladys Bramhall Wilner
WILNER Gladys Bramhall Wilner, pioneering aviatrix, archaeologist, dies at 98. Gladys Bramhall Wilner, who flew air races against Amelia Earhart and later dug for evidence of early human habitation in America, died Friday June 3, 2009. She was 98. Mrs. Wilner, who was known as Peggy, was born in Wyalusing, Pennsylvania. She trained as a nurse and worked in Brooklyn and Manhattan. In the early 1930 she learned to fly after only two hours' instruction. She held the first Parachute Rigger License ever earned by a woman, number 192, in 1931. In the early 1930's she competed in air races and flew air shows, including the all-woman Annette Gipson Air Race in 1934 at Roosevelt Field, New York (Amelia Earhart won). In 1932 she was recruited to fly nonstop to Rome from Floyd Bennett Field in New York. The Bellanca airplane to be flown was named The American Nurse, in honor of Mrs. Wilner, who was the only woman available who was a nurse, a pilot, and parachute jumper. Scheduled to parachute over Florence, Mrs. Wilner eventually declined to participate (the American Nurse was lost at sea during the attempt). In later years Mrs. Wilner earned degrees in archaeology from the University of Texas and did field work an early human habitation in the Americas, finding possible evidence that humans inhabited North America earlier than the widely accepted date of 11,000 B.C. Formerly married to the late Albert Wilner, Mrs. Wilner is survived by her daughter Nadine Beezley of Tucson, Arizona, her son, attorney Norwood S. Wilner, of Jacksonville Florida, and six grandchildren. Please Sign the Guestbook @ Jacksonville.com
To plant trees in memory, please visit our Sympathy Store.
Published by Florida Times-Union from Jul. 7 to Jul. 8, 2009.
MEMORIAL EVENTS
No memorial events are currently scheduled.
To offer your sympathy during this difficult time, you can now have memorial trees planted in a National Forest in memory of your loved one.
MAKE A DONATION
MEMORIES & CONDOLENCES
17 Entries
We will miss Peggy. She was a great part of our holiday celebrations for so many years. What a life she had!
Marion Kendall
July 20, 2009
To the family of one of nicest LADIES that I have ever had the pleasure of meeting. Your mother and grandmother was very special to me and I enjoyed every time that we were together. To have her in my exercise class and to hear her tell a member with the same name and a birthday a month later that she had better do something for herself was just special. She was 90th something at the time. She even invited my wife and I to come visit her because Nadine would not let us visit her up north. This was astanding joke with us.You had a special lady in your family and she will be greatly missed.Thank you Nadie for the chance to meet Ms Peggy.
Sam u. Susanne Freeman
Sam u. Susanne Freeman
July 16, 2009
Sounds like she was a wonderful woman. I am sorry for your loss.
Tallie O Young
July 11, 2009
I will deeply miss Mrs,wilner I really enjoyed doing her hair and visiting with her every wed at river garden. I loved to hear her stories about africa and her flying days and wingwalking with amelia airheart I think the funniest day was when she told me that she had never colored her hair before, at the age of 98 she wanted to color her hair for the first time in her life so she could be a sexy blond(those are her exact words) we all got a big laugh . she enjoyed getting her hair done and she really got a kick out of it when i walked into her room and seen her friend oscar it scared me! she laughed so hard she told me it was her boyfriend. I will truely miss my friend,she was an insperation to all of us that you can do anything if you really want to. She was not afarid of trying new things and i really loved that about her. Thank you for sharing your Mother with me mine has been gone for 11 years. Im sorry for your loss. signed linda woitas (river garden beauty shop)
linda woitas
July 11, 2009
Mom passed just 1 month before her 99th Birthday and my brother Woody and I were blessed to be with her at the time of her passing. It was truly a gift from God to be with her.
I treasured my Momsie and loved her more than words can say. Every day I thanked God for her. Her smiles and hugs always made everything seem better and she always was a big part of my life. I carry her love in my heart every day for strength and guidance and courage. It fills me with pride and joy and gratitude to be the daughter of the most amazingly wonderful Mother on earth.
Happy almost 99th Birthday Momsie and although you didn't make it to 100---you surely packed more than 100 years of life into your time here on earth. Until we meet in Heaven, my love is with you always.
Love forever, your daughter, Nadine
Nadine Beezley
July 11, 2009
To my dearest family, some things I'd like to say...
but first of all, to let you know, that I arrived okay.
I'm writing this from heaven. Here I dwell with God above.
Here, there's no more tears of sadness; here is just eternal love.

Ruth Ann Mahaffey (author)
©Copyright 1998-2009
carrie northrup kasik
July 10, 2009
AUNT GLADYS,
I HOPE YOU ARE WITH MY MOTHER (DONNA KISSELL NORTHRUP). SHE LOVED YOU LOTS JUST AS I DID. YOU WERE A REMARKABLE LADY AND IT WAS A PRIVELEDGE TO KNOW YOU AND TO HAVE SPENT TIME WITH YOU.
LOVE ANN BRAMHALL KISSELL
NORTHRUP KASIK
July 10, 2009
Aunt Gladys was a legend in our family. I grew up listening to stories about all the things she did in her life. She was an inspiration to all the women in the family.
Linda (Zeliff) North
July 10, 2009
She was a very special lady, and I'm honored to have known her. She will be missed....I feel her from above smiling down on us and happy she's above the clouds instead of flying through them :)
Deb Lovejoy
July 10, 2009
What a Scrabble Player!

Really, what a wonderful, special lady. I loved every minute I could be with her. She made a most wonderful and interesting life for herself, and I think she enjoyed every mihute of it.

I know she will be sorely missed. My love and thoughts are with all the family.
Prudence DiVincenzo
July 10, 2009 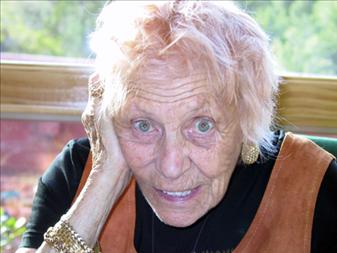 July 10, 2009
I only knew her as 'Aunt Gladys.' I met her a few times when I was younger. I guess she is my great-great Aunt. I am one of Bobbie (Roberta) Kissel Zeliff's twin granddaugthers. I was always fascinated by the stories of 'Aunt Gladys' and I'm glad I was able to meet her at least a couple of times. What an amazing lady. I'm proud to be related to her. She lived a long and amazing life! - Kyra Marget (Savino) Springett
Kyra Springett
July 10, 2009
Aunt Gladys was the matriarch of our family -- my grandmother's sister. My mom, Donna Northrup, passed December 3rd, 2008 -- she loved you. I hope you are with her now. You and my sister, Ann, and I traveled to New Palz together -- we had a ball. My daughter Brandy adores you -- My wish is to be like you -- so independent -- so adventurous. I remember your Phoenix ring and the story you told me about it. We didn't see much of each other, but you were always a part of my life and you will always be a part of my history. I am so happy to have known you. Go home - be with your sisters, Helen and Pauline. Be with your nieces - Elsie, Floy, Donna, Bobbie, Patty. We love you, Aunt Gladys. Thank you for the light you gave us. Shirley (Bramhall, Kissell, Northrup, Weston) Love, you.
Shirley Weston
July 9, 2009
Peggy was one of the awesome ladies I've ever met. I'm a much better person for knowing her. She will be missed
Becci Ausitn
July 8, 2009
We met and talked to Peggy several times when she would come to Tucson to see her daughter, a WeightWatcher Leader. Peggy was witty and had a dry sense of humor. Shy about herself but outgoing around others. Truly a remarkable woman. We will miss her.
ted and barb frohling
July 8, 2009
A great lady. She lived a great life. She will be missed.
Len Doty
July 8, 2009
So Sorry to hear of your Mother's passing. I am sure she will be missed.
Jerry Neville
July 7, 2009
Showing 1 - 17 of 17 results