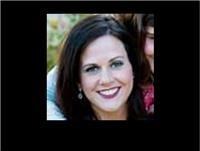 Andrea M. Weilacher, an educator who encouraged students to realize the possibilities she saw in them, died Thursday in ProMedica Toledo Hospital. She was 43.

She had a short illness, her husband, Tyler Weilacher, said, and her death was unexpected.

She was an intervention specialist at the Discovery Academy, a charter school in West Toledo. She worked individually with students who have cognitive delays, or other needs, in the academic curriculum - math, reading, writing - but also in adaptive behavior goals.

"She loved kids and loved helping bridge that gap," said Thia Strange, special education coordinator at Discovery. "She was so warm and welcoming."

"She felt that people didn't hear enough positive things," Ms. Strange said. "She had a big personality, and she fought for what she believed in. She fought for her students."

Mrs. Weilacher knew that learning can be difficult, her husband said.

"She understood you had to have a passion and you have to believe in yourself and most people in life have to have someone to help them believe in themselves," her husband said. "She was the biggest cheerleader to her students."

She worked until the day before she went in the hospital in early October, Ms. Strange said, and continued her practice of greeting students at the front door in the morning and saying goodbye in the back hall at dismissal, but seated in a chair.

"She had a better work ethic than people who are fully healthy," Ms. Strange said.

Mrs. Weilacher was principal for five years of the former Nexus Academy, a charter school downtown, which featured learning in an office-like setting and mixed face-to-face classes with computer-based activity. Students who felt their previous school wasn't working for them, whether because of overcrowding or teacher inattention, "in a school like this, we can sort of combat those reasons," she told The Blade in 2012, several months after the school opened.

There was no blueprint for running such a school, said Charlie Carver, who was founding principal then of the Nexus Academy in Lansing, Mich. The two were in contact, remotely or in person, and remained friends afterward.

"We had some wonderful professional disagreements, with love and laughter and a beer nearby, if it was after hours," Mr. Carver said, recalling those days. "She was strong in her convictions. She had high expectations for these kids. She wanted them to have great lives. She wasn't tough for the sake of being tough."

She earlier was special education director of Hope Academy and an intervention specialist in Toledo Public Schools. She started her career at Wauseon High School, where she was marketing teacher for seven years.

Andrea Marie Everhardt was born Aug. 28, 1978, and grew up in West Toledo. She was a 1996 graduate of Start High School, where a clothing business she created won a DECA award.

She had bachelor's degrees in marketing education and business education from Bowling Green State University and a master of educational leadership degree from the University of Dayton.

The family suggests tributes to the Susan G. Komen Breast Cancer Foundation.
Published by The Blade on Oct. 27, 2021.
MEMORIAL EVENTS
Funeral services provided by:
Coyle Funeral Home
MAKE A DONATION
MEMORIES & CONDOLENCES
3 Entries
I already miss Mrs. Weilacher so much. She had such an immense impact on my life and changed the trajectory of my future. Without her, I don't think I would have made it this far in my life. She saw something in me when I couldn't see anything. I didn't even believe in myself when I met her- but she believed enough for the both of us. This earth lost one of the best people I've ever come across in my life. She will live on in my heart forever, as well as every other student she's come across. Whether in or out of school, we were all her children-my deepest condolences to Tyler and the kids. I always thought HP was overrated; however, I bought all the Harry Potter books to read in her honor. I finished the first one in a day, and I can't wait to finish them. The books are almost as magical as she was.
Hannah Sabecki
Friend
October 29, 2021
I did not know this wonderful human or any of her family but I surely wish I'd had the pleasure. As a parent of a special needs child, this is exactly the description of an educator you want in your life. The loss is immeasurable. May God grant you peace and His amazing grace.
Bonita Gaytan
October 27, 2021
Hello there, God Bless you and your Family, my 3 children just begin going to Discovery a few weeks ago! I'm saddened to hear about Miss Andrea's passing. She's only a year older than myself! I am very impressed to hear of all her education what a very well rounded, humble and intelligent woman! She leaves behind, a wonderful, groundbreaking legacy, for her Family and friends My deepest apologies, sympathy and condolences to the entire family and her extended school family God bless and love
Niki Williams
October 27, 2021
Showing 1 - 3 of 3 results