He lived in Denver 25 years but had a stroke about three years ago and moved to an assisted-living facility to be near his son John. He last lived in the Toledo area in the 1960s, his son said. "He was a very strong man who loved and cared for his family very deeply," his son said.

In 1989, he was sentenced to six months in federal prison and 2 1/2 years of probation and fined more than $850,000. His attorney had argued that a potential five-year sentence was inappropriate for Overmyer, "who rose so high and fell so far."

Overmyer in court asked for leniency on behalf of his family: "If I have erred … I am deeply sorry."

The publication Dun's Review in 1966 called Overmyer a "man on the move" in a feature headlined "Wizard of the Warehouse."

"Crewcut, bespectacled, and built like a linebacker, Overmyer is at 41 the undisputed king of the warehousemen," the article said, "with 260 booked-solid buildings in 55 cities, a client roster (including GM) that runs into the hundreds and a knack for innovation that has revolutionized the 'vast wasteland' of warehousing and made Overmyer a millionaire many times over."

He attended Denison University in Granville, Ohio, before and after Army service in World War II. He was a transport warrant officer and helped with barge unloadings during the D-Day landings.

His father, Harrison, was in the wholesale grocery business before starting Merchants and Manufacturers Warehouse Co.

Overmyer opened his first facility in the late 1940s.

"My father wanted to take it to a brand-new level," his son said. "The man never believed in the word 'no.'?"

Instead of storing goods in multistory structures, he constructed long, narrow, high-ceilinged single-story buildings. A truck dock in the front and a rail siding in the rear allowed goods to flow smoothly.

"But perhaps his greatest contribution to modern warehousing stems from Overmyer's contention that the way to higher profits is through higher overhead," Dun's Review wrote.

Overmyer began WDHO-TV, Channel 24, in the mid-1960s. He had five other UHF stations nationwide and started the Overmyer Network, later renamed the United Network. The aim, ultimately unsuccessful, was to make it a fourth major television network.

For several years in the 1960s, he owned the Toledo Monitor, a weekly newspaper. He also founded a bank.

He eventually had holdings worth $200 million, including the D.H. Overmyer chain of warehouses, with 350 buildings and 32 million square feet of space in North America and Europe.

He lost his warehouses and home in Westchester County, New York, in a 15-year series of bankruptcies. His ownership of Channel 24 was a casualty, and the station was rechristened WNWO.

The bankruptcy-fraud case stemmed from complicated leasing arrangements among his companies, including Channel 24.

"He was a good man," his son said. "You look at today's people, what people have done, his mistakes don't compare to the mistakes that other people have made."

His son recalled a father who liked to ski and hunt, who introduced his children to golf, and took his sons on an Alaskan fishing adventure four years ago.

"The man made mistakes, but he was always there for his family," his son said.

He and his wife, Shirley, married in 1943. She died in 1994. He also was preceded in death by daughter Barbara.

Surviving are his sons John and Edward Overmyer; daughters Elizabeth and Olga Overmyer, and several grandchildren.

Visitation is to be from 4 to 6 p.m. Sunday in the Reeb Funeral Home, Sylvania. Graveside services are to be at 10 a.m. Monday in Toledo Memorial Park.

Contact Mark Zaborney at: [email protected] or 419-724-6182.
Published by The Blade on Jul. 28, 2012.
MEMORIAL EVENTS
Funeral services provided by:
Reeb Funeral Home
MAKE A DONATION
MEMORIES & CONDOLENCES
8 Entries
I have only just read of Dan's passing and I was shocked as I was sure he would go on for ever. I travelled extensively with Dan and although he was the same age as my dad we worked together as colleagues and had great fun. Sadly all the stalwarts from C.O.P.S are gone, Barbara, John and now Dan.
Malcolm Manners
October 29, 2013
Dear John, Edward and Elizabeth
I was so saddened to hear of Dan's passing. The card I sent last Christmas came back but I didn't know where to look. I worked for your Dad for over 10 years as his Exec Secretary in NYC.. . .he was a giant among men, always generous, witty and brilliant. They don't make them like that anymore! My deepest condolences. Patty Iannucci (Zuckerman)
November 7, 2012 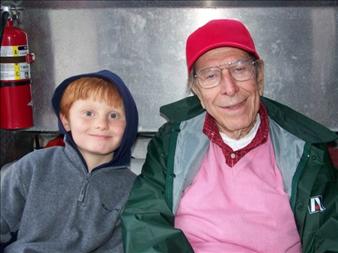 My grandfather taught me everything I know about business and a whole lot about life & family. My heart is broken; he will be sorely missed.
October 9, 2012
Dan was a giant among men whose accomplishments in Russia, China and Africa helped build those economies.
His worldwide banking organization touch the lives of many, few knew his real impact.
Gordon Duff
September 9, 2012
Dan helped me underswtand all the part of the capital markets I hadn't seen before, and was always congenial. I will miss him
Neil Fitzgerald
August 26, 2012
I am sorry to hear of your loss.I lost track of Dan a few years ago when the Christmas card didn't arrive.I tried email,cell phone and couldn't find out when he left Denver.
Anna Marie Betz
P.S. Carl is also deceased.
July 30, 2012
I'm sorry for your loss John.
John Gilbert
July 28, 2012
I am sorry to hear of your loss. -Glen King
July 28, 2012
Showing 1 - 8 of 8 results