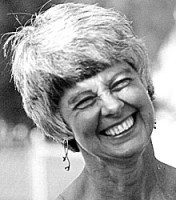 FUNERAL HOME
Blanchard-Strabler Funeral Home
3219 Tremainsville Road
Toledo, OH
SMITH - ENSIGN Elizabeth J. Mom left us Sunday July 15, 2012, in peace. Born to Edward and Julia Meyer October 4, 1924, in Florence, WI, Betty learned to love the outdoors of "up north". The valedictorian and "Miss Florence County" of 1942 moved to war-time Chicago where she began studies in accounting at Northwestern. She became a secretary to her future husband, Norman F. Smith and the postwar jobs brought them to a permanent home in west Toledo, where they raised their 2 daughters. Betty became active in PTA, church youth group, hosting foreign students and being "mom" to all. She enjoyed bridge clubs, dancing and was a founding member of the West Y Dolphins synchronized swimmers. After Fred's death in 1977, she worked as a faculty secretary at the new MCO campus until retirement. She met and married Hoyt Ensign in 1987 and together they enjoyed an active social life as members of Trilby Methodist, Toledo Ski Club, the Polish-American Band. On any given night that a big band played, you could see Hoyt and Betty jitterbug away. In 2009, mom reached her final goal of a B.A. at University of Toledo. We miss her terribly. Betty is survived by her loving husband, Hoyt; daughters, Sarah Smith (Kathy La Fountain), Juli Wemmer (Diane Nagelkirk), Taeko Shima, and Sheyla Lira (Vitor); grandson, Casey Smith; stepchildren, Marc Ensign (Marti), Eric Ensign (Maria), Wendy Trom (Kevin), Sarah Zervis, Crissey Ensign, Andy Ensign, and their children, Mason, MacKenzie, Brooke, Jackson, Joey, Sophie, Christin, Ashley and Logan. Visitation is at Blanchard-Strabler, 1163 W. Sylvania Ave. from 2:00-5:00 p.m. Wednesday July 18, 2012, service at 6:00 p.m.

Published by The Blade on Jul. 17, 2012.
To plant trees in memory, please visit the Sympathy Store.
MEMORIAL EVENTS
To offer your sympathy during this difficult time, you can now have memorial trees planted in a National Forest in memory of your loved one.
Funeral services provided by:
Blanchard-Strabler Funeral Home
MAKE A DONATION
MEMORIES & CONDOLENCES
11 Entries
We were very sorry to hear of Betty's passing. She was a wonderful warm lady that will be definitely missed!
Bill and Kathy Hand
Bill & Kathy Hand
July 29, 2012
I am so sorry to hear of Betty's passing. She was a bright light for all of us.
Jim French
James French
July 27, 2012
We were sad to learn of your loss. Betty's warmth and vitality enriched all our lives. She will be missed by friends in PAC Band as well as the many other groups to which she contributed her talents and support.
Dan and Beth Duvendack
July 25, 2012
My deepest sympathy on the death of Betty. I will always remember her warm smile and when the PAC Band played In the Mood, Betty and Hoyt dancing in front of the Band.
Bob & Sandy Krichbaum, Monclova, Ohio
July 24, 2012
I am so sorry for your loss. I spent many choir practices with Hoyt and Betty at Trilby Church. They even hosted the choir picnic in their pool a couple times. She was a wonderful person and always had a smile on her face.
Debby Iott
July 23, 2012
I am sorry for your loss. I never had the opportunity to meet Elizabeth, but wanted to share what a beautiful picture this is. Her smile and warmth can be felt just by looking at it. Take care and may you find peace in remembering her......Beth
July 19, 2012
Juli and Diane,
We were so sad to hear about your Mom's passing. It was just last week Juli that you and I spoke about your dear Mom. Our thought, prayers and love extend to your entire family. Losing your Mom is such a huge loss. We hope you can celebrate her love and commitment to life. She will be missed. Love Denise and Therese
Denise Zoeterman
July 18, 2012
Hoyt and family, We are just so sad to lose our deer friend and neighbor, She always wore that beautiful smile and was just as sweet as she could be. Just breaks our hearts. Todd, Julia and I will all miss her. What a privilege to have known her. God Bless you.
Robin Dunham
July 18, 2012
Deepest condolences to the Smith-Ensign family. Betty was an incredibly smart, talented and loving friend.
Jenny Zak
July 17, 2012
My sincerest sympathy to Hoyt and family. Betty was one of the nicest people I have ever known. She will be missed.
Carol Gannon-Meier
July 17, 2012
In loving memory of a wonderful person. We will love you and miss you always.
Janet Diefenbach
July 17, 2012
Showing 1 - 11 of 11 results