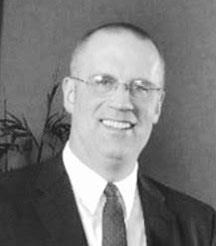 Eric A. Ramlow, 53 years of Toledo, Ohio went to be with his Lord and savior on January 16, 2016, as the result of a tragic accident. Eric was born in Toledo, Ohio to Bertram A. and Kathryn M. (Anderson) Ramlow. Eric married Patricia L. (Stammen) Miller in 1986 and they later divorced. In 2007 he married Margaret A. (Chesebro) Ramlow.

He is survived by his mother, his wife, and his siblings, John A. Ramlow and Constance A. (Ramlow) Kramer. Eric is also survived by his three sons, Christopher P. Ramlow, Matthew A. Ramlow, and Adam B. Ramlow and his stepson, Kevin C. Davis. He leaves behind many friends in the Kairos prison ministry community, Emmaus community, the Connexions Sunday school class, and the Woodlane community of Bowling Green.

Eric's faith was paramount in his life. He always had his Bible on hand, and was ready to provide guidance or a comforting word. He grew up as an active member of Holy Trinity Lutheran Church of Toledo. Eric attended Promise Keepers which helped spark his passion for the Lord. After returning from Erie, Pennsylvania Eric's family was active in Waterville United Methodist Church. Eric and his wife currently attend Bowling Green First United Methodist Church where Eric was active in mission work, Sunday school, mentoring of confirmands, and was in charge of the community food pantry.

Eric was a loving son and brother. He called his mother every day with a joke and a smile. Eric played a big role assisting his mother in her independence, and was always close to lend an ear or a helping hand.

A devoted father, he supported his sons in all their pursuits, participating and encouraging them in every way he could. He was proud to graduate his three sons from Anthony Wayne High School, see them all go on to graduate college, and pursue higher degrees. Eric always remained close to his sons no matter the distance, and never missed an opportunity to watch Matt row with Yale University Crew. Eric was always willing to provide guidance and address any issue no matter how big or small.

Eric was a kind and caring husband. He had a sharp sense of humor and brought laughter into their home every day. Eric also treated Meg's son as his own. Meg and Eric loved to travel, and enjoyed spending time with family and friends.

Eric loved having fun, whether it was rooting for the Buckeyes, singing too loud at church, dominating the card table, or touting his international ping pong championship title. He participated in and supported the MS Bike to the Bay from the beginning and encouraged his sons to join him. Eric also went on many hiking adventures including a 250 mile jaunt on the Pacific Crest Trail in Washington, with his son.

A firm believer in the goodness of Christ, he was devoted to studying the bible. Willingness to share the word of the Lord with anyone, anywhere, was a cornerstone of his faith. "The community of saints is not just a network of connections between people. It is first and foremost a community of our hearts."

The family will receive guests after the ceremony.

Dunn Funeral Home is assisting the family with arrangements. Condolences may be sent to the family at

He offered his comfort to me when I lost my brother (and his classmate at Bowsher) to a traffic accident, and would always inquire as to how my brother's family was doing when I saw him. I very much appreciated his compassion.

Certainly the Toledo area cycling community will miss him. It, and the Toledo community in general, is better off for the time he spent with us.
Mark Heider
January 19, 2016
May he rest in peace...I had the pleasure of working with Eric many years ago...so very sorry. Prayers for his wonderful family. Cathy Wood, O-I
January 19, 2016
I am very proud to have been able to call Eric Ramlow a friend . He was one of the kindest men I have come across in this journey we call life. He will be very mnissed.
Ray Myers
January 19, 2016
Meg, my heart breaks for you and the boys. I never met Eric but could tell that you loved him with your whole heart. What a gift you had in him!
Amy Kutschbach
January 19, 2016
For me, Eric was one of the most genuine people I have known. His positive attitude and support were contagious. He made many lives better, including mine. My prayers are with the family. Thank you for sharing this special human with all of us. I will cherish the memories I have received.

I regret my schedule prohibits my attendance at the services, yet I will be there in spirt.

God Bless!
Rich Crawford
January 19, 2016
Eric was a Pi Kappa Phi fraternity brother of mine at the University of Toledo. I was younger than him, and didn't know him as well as the guys in his age group, but the Eric I did know was as great of a guy as any I have ever experienced in any walk of life. Although I hadn't seen him in several years, I am both proud and glad to call him my brother, and my friend. Rest in peace, Brother Omar.
Chris Gunter
January 18, 2016
Dear Ramlow Family, I am deeply saddened by Eric's tragic accident. He was a wonderful, Christian man and he will be missed very much. I pray for God to lift you up and hold you near as you carry onward. Your Brother in Christ,
Keith Colyer
January 18, 2016
To Kate Ramlow , My heart breaks for you at this time!! Wish I could give you a great big hug!!! So sorry for your loss!!!
Darlene Tabb
January 18, 2016
I am so sorry for your loss. I knew Eric from high school and remember as a kind person. May God be with you.
laura garling
January 18, 2016
So sorry to hear if this tragic accident. I've know Eric since I was a kid. He was our cub scout pack leader and I've know all his boys since then. My thoughts and prayers are with his family.
Drew Grogan
January 18, 2016
My mother, Rita Perse, and I were so saddened by your loss, Mrs. Ramlow and family. We are keeping the family in our prayers. Kathy Perse Helmick
January 18, 2016
I was a friend of Eric at O-I . We were biking, and Ping Pong players. I am so sorry for your loss. Dave Walton
January 18, 2016
My condolences to Eric's family. I remember Eric in his high school days . he was always funny and had a great jump shot
Dan Schira
January 18, 2016
Although I have had less frequent interaction with Eric over the past 25 years, I knew him since I was a little boy and throughout my years at the University of Toledo. (I don't believe that Eric was ever little.) A truly beautiful person who clearly understood the essence of life, one could hardly have been acquainted with a kinder human being.
Matthew Swiergosz
January 18, 2016
My condolences to the entire Ramlow family...
Angie Porter-Perkins
January 18, 2016
I had the pleasure of working with Eric at O-I and I am so sorry to hear of your tragic loss. He was a very kind person and will be missed dearly. My thoughts and prayers are with the family.
Nancy Fust
January 18, 2016
Showing 1 - 30 of 30 results