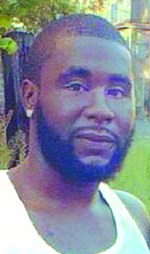 FUNERAL HOME
Hughes Funeral Home
324 Bellevue Ave.
Trenton, NJ
Hakeem Joseph Lamar Brooks TRENTON - Hakeem Joseph Lamar Brooks age 28 of Trenton passed away Dec. 1, 2014. Born in Trenton and was a lifelong resident. Hakeem was educated in the Trenton public school system and was a graduate of Trenton Central High School Class of 2004. He enjoyed building model airplanes and cars, playing video games and spending time with his family. Hakeem was predeceased by his grandparents Joseph Scriven, Pauline Carmichael, Virgie Brooks, Willis Brooks, and Veronica Marshall, uncles Todd and Toby Scriven, and an aunt Iyeesha Thomas. Hakeem is survived by his son Khalif Mathis, loving mother Alicia Brooks, father Quinn Marshall, grandmother Lorraine Brooks, grandfather Willie Daniels, sisters Moniquca Dowell, Niasia Brooks, Roxanne Dowell, Sharika Brooks, Amber Dowell, Breonka Brooks, Quinnesa Dowling, and Dyshaneek Nickens, brothers Shazeak Thomas, Shakeem Nickens, and Rakeem Brooks, two aunts Dolores Brown and Alice Wells, godmother Yolanda Daniels, fiance' Tierra Heading, two special friends "Big Bro" Pierce and Sherman Rogers, a host of other relatives and friends. Funeral service will be 11am Mon Dec. 8, 2014 at the Lighthouse Outreach Ministries 715 Bellevue Ave Trenton, NJ. Calling hours will be 9am until time of service at the church. Interment Greenwood Cemetery. Arrangements are by the Hughes Funeral Home.
Published by The Trentonian from Dec. 5 to Dec. 6, 2014.
MEMORIAL EVENTS
To offer your sympathy during this difficult time, you can now have memorial trees planted in a National Forest in memory of your loved one.
Funeral services provided by:
Hughes Funeral Home
MAKE A DONATION
MEMORIES & CONDOLENCES
Sponsored by Hughes Funeral Home.
12 Entries
R.I.P. Hakeem
Kimberly Barlow
Friend
November 30, 2020
To my grandson/son I'm going to miss you so much you are my first grandchild and I love you so much I raised you as one of my own children. We had so much fun together we had our good days and bad days , but at the end we love the time that we spent together. The world don't owe you nothing rest in peace my love one. I know that you are alright. No worries and no more hurt. Love you Nana Edie
Lorraine Edie Scriven-Brooks
December 30, 2014
RIP Hakeem My Condolences to your family
Kimberly Barlow
December 11, 2014
Kimberly A
December 8, 2014
Sorry for your loss but may he SIP and may the Lord give you peace in your time of sorrow
Mertice Watkins
December 8, 2014
This journey which were walk carries mysteries and questions. At this moment in time trust and belief in God is the only thing we have to hold onto. Through this moment in time look to God for total comfort and peace. Complete healing and guidance rest in his love.
Theodore Lane
December 8, 2014
Alicia I will keep you and your family in Constant prayer.
Nikki Phillips
December 8, 2014
To Edie and Family,
May God comort you during this difficult time. Thinking of you and praying for you.
May God Bless You All.
Kim Scriven-Laramore and Family
December 8, 2014
Alicia and Quinn (and family), I am praying for your family during these dark hours. Earth has no sorrow that Heaven cannot heal!!! Look to the Lord for comfort and peace.
Minister Carol Kidd ( Sheree's mother)
Carol Kidd
December 7, 2014
Deepest condolences to the family on the loss of your loved one. Praying to God in times of sorrow brings comfort and inner peace. May your prayers be heard by God and give you the strength to get through this difficult time.
December 6, 2014
Sincere condolences to the Brooks family, may God continue to comfort you is this time of need.

Askew & Grimsley Family
RHONDA ASKEW-GRIMSLEY
December 6, 2014
Sorry to read of this great loss to the family. This is a very difficult time you are experiencing. The passage in Romans chapter 12 verse 15 encourages to rejoice with those who rejoice and weep with those who weep. So until your tears subside may you find the comfort of God. And a measure of peace in the loving support of each other and from friends.
Lewises
December 6, 2014
Showing 1 - 12 of 12 results