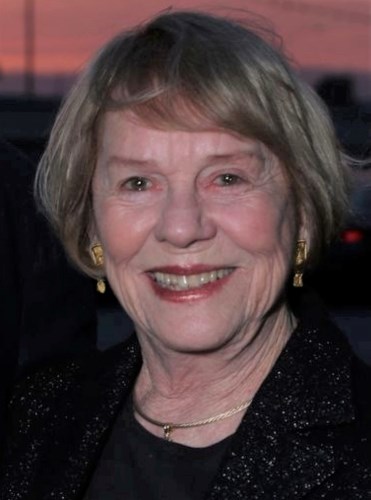 PIEDMONT, Calif. - Barbara Fox Roach passed away peacefully in her sleep, in her beloved Piedmont home on Monday, November 8, 2021, after a courageous six-month battle with cancer. She lived a long, extraordinary life, capped by the celebration of her ninetieth birthday in June.

Barbara was born in Sheridan, Wyoming on June 2, 1931. She was the youngest of seven siblings and the only daughter of John Raymond Fox and Elsie Warren Fox. Despite an age difference that spanned twenty-one years, she remained close to all of her brothers: Les, Joe, Art, Gil, Gene, and Jerry. Her childhood years were a challenge during the Depression, but growing up on a ranch helped shape Barbara into the ambitious, determined, and courageous young woman she became. At the age of thirteen, she moved in with another family, where she earned her room and board as a nanny and house cleaner until her graduation from Sheridan High School in 1949. Barbara attended Cottey College in Missouri, then transferred to the University of Wyoming, where she earned her bachelor's degree in English in 1953 and was a member of Pi Beta Phi sorority.

Barbara then moved west to San Francisco and became a stewardess for United Airlines. At a time when commercial flying was still in its nascency, she enjoyed long, friendly encounters with the likes of Walt Disney, Gregory Peck, and John Steinbeck. It was in San Francisco where she met the first love of her life, Justin M. Roach Jr., while Justin was attending Stanford Law School. They married in San Francisco in 1959 and then moved to Piedmont in 1960, where they raised their family and lived the rest of their lives. Justin began a long and distinguished legal career with the Oakland law firm that would eventually become Crosby, Heafey, Roach & May. Barbara and Justin enjoyed a twenty-eight year marriage, until Justin's death in 1987. In 2005, Barbara met the second love of her life, Arne Kalmar, also of Piedmont. The two enjoyed ten wonderful years together, traveling the world, vacationing at their homes in Carmel and Palm Desert, and playing golf with friends at Claremont Country Club in Oakland and Monterey Peninsula Country Club in Pebble Beach, until Arne's passing in 2016.

A life-long Republican and philanthropist, Barbara contributed to numerous charitable, community, and political organizations, including the Cancer League, the Oakland Museum, the Russian National Orchestra, the San Francisco Opera, the Oakland Symphony, the Oakland Zoo, and the Buffalo Bill Center of the Wild West. As a member of the board of the Oakland Zoo, Barbara played an important role in the zoo's fundraising efforts and its transformation into a world-class institution. Her passion for politics eventually led her to work on the re-election campaign of Pete Wilson to the United States Senate and to become a member of the Lincoln Club of Northern California and the Media Research Group.

Barbara will be remembered for her lively wit, vivacity, and friendly nature. She was always an engaged listener who loved to share her observations through colorful vignettes of people and events. She also possessed a steady and insatiable curiosity in past and present issues - a trait cultivated by years of traveling the world with experts and loved ones. Not surprisingly, she had numerous interests and hobbies that ranged from orchid growing and needlepointing to playing tennis and golf. She remained an avid reader of fiction and nonfiction throughout her life, and loved the opera as much as she loved a crisp, morning walk. Few could ever keep pace with her, even in her later years.

Barbara's family is eternally grateful for the love and support of all of Barbara's close friends who were by her side, physically and spiritually, these last several months. In particular, the family would like to extend its profound thanks and deep appreciation to Amy McClaskey and Elizabeth Vigo, who were her companions and caregivers until the very end.

A private memorial service and celebration of life for family and friends is planned for January 8, 2022. Donations in Barbara's memory may be made to the Oakland Zoo, the Buffalo Bill Center of the Wild West, or your charity of choice.

Published by Casper Star-Tribune on Nov. 21, 2021.
To plant trees in memory, please visit the Sympathy Store.
MEMORIAL EVENTS
Jan
8
Memorial service
CA
MAKE A DONATION
Please consider a donation as requested by the family.
MEMORIES & CONDOLENCES
4 Entries
Our deepest sympathies to the family. We had the pleasure of knowing Barbara when she served on The Oakland Zoo board. She always had a smile to share and a warm welcome. We have so many nice memories of time spent together, including a Zoo trip to Kenya in 1991. She was a joy to be with and a truly caring, generous person who we will always remember and celebrate. Peace and comfort.
Martha (Smith) Bauman and Jim Bauman
Friend
November 23, 2021
We will miss Auntie Barb. All my memories of her are filled with love, caring and joy. She always made me feel loved from my earliest memories to my the last time we talked just before she passed. My heart goes out to all my cousins. Love you all! Steve
Steve Ellis
November 20, 2021
Dave and family our deepest sympathies. May Gods comfort surround you all at this time.
Rob & Linda Faulkner
Other
November 20, 2021
I adored Barbara and miss her more every day. She was the best of friends and I feel very blessed to have had her in my life. My heart goes out to her wonderful children and their offspring. Bless you all.
Ann Healy
Friend
November 19, 2021
Showing 1 - 4 of 4 results