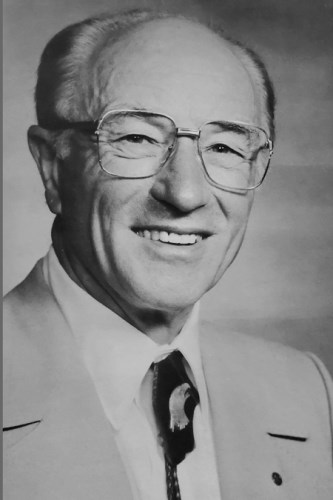 CODY - Frank B. Odasz, Jr passed peacefully early on Monday, February 22, 2021 in Cody, Wyoming, at the age of 98; joining the love of his life, Joanne Pauline Odasz who passed in Casper, November 11, 2014. Frank was born October 8, 1922, to Francis Bernard Odasz and Eileen Amelia Smith in Brooklyn, NY and was the oldest of six children, survived by his youngest sister Eileen Weinstein.

Frank started his career in 1947 as a Chemical Engineer at Husky Oil, in Cody. He later worked 15 years as a Chemical Engineer in San Francisco with Bechtel Corporation. He designed oil refineries all over the world, in locations such as England, East Germany, Poland, and Australia. Although his engineering and design skills were known internationally, his heart was always in Wyoming. In 1974 he accepted a position with ETSI the coal slurry pipeline, which allowed him to return his family to Casper, Wyoming. In February 2017, Frank moved back to Cody to complete his life journey around the world, and live out his remaining years in his preferred high quality Wyoming lifestyle.

Frank was still playing tennis at age 92. At one point he was a nationally ranked tennis player, in the 80 year-old and over bracket. He also greatly enjoyed hunting, fishing, camping and birding, until his final two weeks.

Frank was known for his ethics, intelligence, consideration, humor and quick wit. He was an adventurer, along with his loving wife and five kids. The family was always ready to jump in the station wagon, with camping gear, three kayaks and a canoe carefully tied on the top, and head down the road for outdoor fun.

No public funeral events are planned at this time, the family will say good-bye in a private service.

Condolences may be sent to www.ballardfh.com/obituary where an online guestbook is available.

No flowers, please; money gifts to your favorite charity are invited.

To plant trees in memory, please visit our Sympathy Store.
Published by Casper Star-Tribune on Mar. 10, 2021.
MEMORIAL EVENTS
No memorial events are currently scheduled.
To offer your sympathy during this difficult time, you can now have memorial trees planted in a National Forest in memory of your loved one.
Funeral services provided by:
Ballard Funeral Home
MAKE A DONATION
Please consider a donation as requested by the family.
GUEST BOOK
Sponsored by Ballard Funeral Home.
2 Entries
A unique individual with a joyful heart. If I spelled a word wrong in any of our correspondence, he would send it back with the correct spelling. I loved him for it. Got to spend a lot of time with Frank and JoAnn I the 80´s.
Jim Hageman
March 10, 2021
Frank was a remarkable person, as was Joanne. I will always remember and treasure their kindness to me during a brief stayover with them, as a young soldier, returning to Vietnam. Blessings to the Odasz family. Tony Marshall
Tony Marshall
March 10, 2021