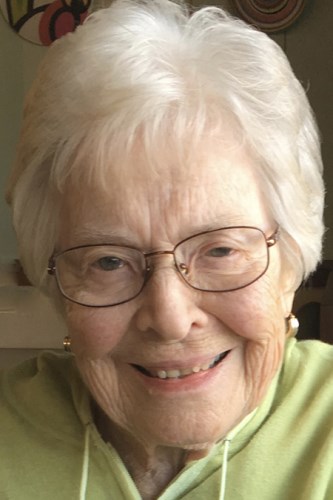 CASPER - Ruth Angeline (Clifton) Garrett, age 91, passed peacefully on January 18, 2021 with her daughter Celine and her sons Richard and Paul at her side. Grateful for the richness of her life she lived her core value, "from one to whom much has been given much will be expected." This was her life's foundation and a challenge that lives on in all who knew and loved her.

Born July 8, 1929 in Denver, Colorado to Roberta Stitt Clifton and Elmer L. Clifton, Ruth graduated from Manual High School in Denver in 1946. There she was Vice-President of the sophomore class '44, Head Girl '45, Student Director of Band '45, and won First in State Oboe Solo Contest '45.

Ruth and high school sweetheart, Dick Garrett, eloped in 1947. In the early 50's, they lived in Casper, Wyoming until returning to Denver. In 1977, with their children grown, they returned to Casper.

Ruth attended the University of Denver, Casper College, and The University of Wyoming, earning her Associate's, Bachelor's and Master's degrees. She was a lifelong member of Alpha Chi Omega

Ruth worked for the Denver District Attorney, the Casper Star Tribune and taught at Casper College. She authored "A Look at Wyoming State Government" for the League of Women Voters and ran twice for Natrona County Commissioner.

Deeply committed to her faith Ruth was a licensed lay preacher, Eucharistic minister, and an instructor in Education for Ministry in the Episcopal Church. She served on both the Vestry and Altar Guild of St. Stephen's Episcopal Church, Casper.

A Memorial service will be held at St. Stephen's, Casper Wyoming on a date to be determined.

To plant trees in memory, please visit our Sympathy Store.
Published by Casper Star-Tribune on Mar. 7, 2021.
MEMORIAL EVENTS
No memorial events are currently scheduled.
To offer your sympathy during this difficult time, you can now have memorial trees planted in a National Forest in memory of your loved one.
GUEST BOOK
1 Entry
To all family members I offer my prayers for peace and healing..... For comfort and love, Kathy Carey
Kathleen E.Carey
March 8, 2021