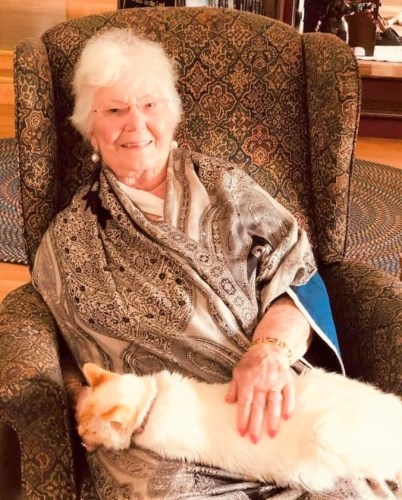 LANDER - Shirley Elizabeth (Wilson) Rector, 91, of Lander, WY (formerly of Casper) quietly passed to glory the morning of July 1, 2021 at home. She was born the eighth of nine children to Fount and Eva Wilson on May 22, 1930 in Armstrong, Illinois.

"The family soon moved to a rural home just south of Urbana, IL. Later they moved to town and she attended Lincoln Grade School, Thornburn Jr. High, and Urbana High School where she enjoyed a very active four years , graduating in 1948. After H.S. graduation she became employed by the University of Illinois working for the Dean of Engineering. It was there she met engineering student Robert "Bob" Rector of rural Smithfield, IL. They were wed July 27, 1950 in Wichita Falls, TX. They were married 69 years until Bob's death in 2019. With a degree in mechanical engineering Bob had a long and successful career in the oil industry. In their life together they lived in eight states. Bob's job with Amoco International took them to Iran, Egypt, and England over ten years. They moved houses 34 times. Shirley was called Betty most of her life until 1970 in Ashland, KY where she became Elizabeth. That became too long to sign art projects so Liz was born. For a short time Beth hung around on the golf course, but in 1990 Shirl took over and stuck! She was a Gemini, what else?" (SER quote)

Shirley was preceded in death by all eight siblings.

She is survived by her daughter, Susan (David) Handy of Lewistown, Illinois; her son, Phillip (Jayson) Rector of Lander; two grandchildren and six great-grandchildren.

Cremation rites took place July 2, 2021 by Hudson Funeral Home in Lander. A Life Celebration will be planned for spring 2022.

Memorials may be made to Shepherd of the Hills Presbyterian Church in Casper or to any Native American Children's fund.

Published by Casper Star-Tribune on Nov. 21, 2021.
To plant trees in memory, please visit the Sympathy Store.
MEMORIAL EVENTS
To offer your sympathy during this difficult time, you can now have memorial trees planted in a National Forest in memory of your loved one.
Funeral services provided by:
Hudson’s Funeral Home - Lander
MAKE A DONATION
MEMORIES & CONDOLENCES
Sponsored by Hudson’s Funeral Home - Lander.
1 Entry
I had the honor to meet both Shirley and Bob. Dynamic people who left an impression on my heart.
Kristeen Terzich
November 22, 2021
Showing 1 - 1 of 1 results